Back to Top
Home/30/ASK Magazine/To Stay or Go? A UAV Science Project Story 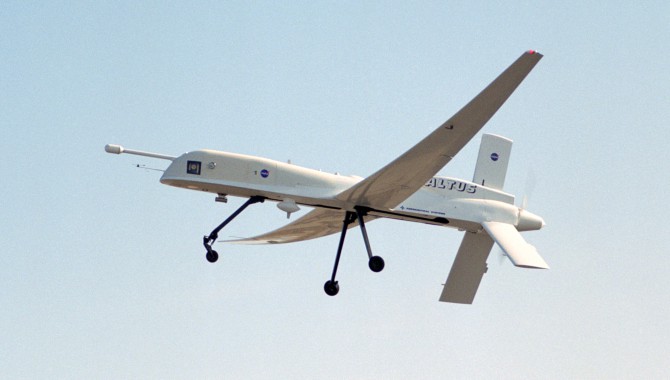 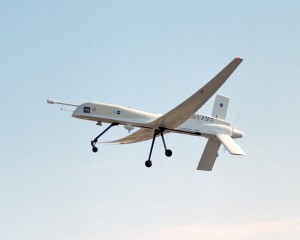 What would you do as a project manager who has already spent twice the analysis budget when the analyst asks for another chunk of change so he might be able to give you a partial answer to meet requirements that seem to be a moving target?

This was our dilemma in the spring of 2002. I was the project manager of the three-year Altus Cumulous Electrification Study (ACES) from beginning to end. It is rewarding to start and finish a project successfully, but this one could easily have been terminated if back-up plans had not been available and ready for use.

ACES was a science experiment to investigate thunderstorms using an unmanned aerial vehicle, or UAV. At the time, the UAV was a new technology that could make a significant and unique contribution to the study of lightning and thunderstorms. Its measurements could be linked to global processes to provide an improved understanding of the total earth system. Part of the NASA-sponsored, UAV-based science demonstration program, the ACES project objectives were

Both an early bad decision based on insufficient data and a well-informed decision made too late can damage a project.

The decision to select the Altus UAV from General Atomics Aeronautical Systems was based on a number of factors, including the maturity of this aircraft system, its performance capabilities and proven flight record, and the successful integration and flight of a developmental version of the ACES payload on Altus in September 2000. In addition, Altus was an electrically quiet platform, ensuring that the thunderstorm measurements could be readily achieved. Slow flight speed coupled with long endurance and high altitude flight gave the Altus aircraft the ability to be maintained continuously near thunderstorms for long periods of time so investigations could be conducted over entire storm life cycles.

The only limitations encountered during the campaign were significant maintenance issues associated with the Altus, arising in large part because it was flown near the edge of its operational limit. The potential for maintenance problems was acknowledged even during the proposal development phase, and some issues did arise during the mission. Clear flight rules defined by General Atomics helped ensure safe operations, though. One rule, for instance, was to maintain altitude so that the UAV could glide back to the runway if it lost engine power.

Patrick Air Force Base at Cape Canaveral was the primary deployment site identified in the ACES proposal. It was selected first for the unique ground-based lightning measurement systems located at NASA’s Kennedy Space Center. Second, we believed that deploying at Patrick, with easy access to the Eastern Test Range and restricted coastal airspace, would ease the FAA approval process. We didn’t foresee the problems that ultimately led to a “no-fly” decision from Patrick.

Predeployment planning and activities (extending back to the proposal development stage) progressed smoothly. From its inception, ACES closely coordinated with the Joint Planning Customer Service Office (JPCSO) and followed its procedures. JPCSO was established in concert with Spaceport Florida Authority, Patrick, and Kennedy as a “one-stop shop” for Cape Canaveral Spaceport services. Since the office was new, though, the working relationships between the various Patrick and Kennedy organizations that it represented were not always well established. In fact, this new model for working with customers may have been a source of animosity or conflict between some of those organizations.

Initially, JPCSO believed that the Altus could be treated like a conventional aircraft with respect to airfield operations and control. They thought the Eastern and Western Range (EWR 127-1) Safety Requirements for rockets would not be applied and the role of the Patrick Range Safety Office would be minimal. However, range safety interest and involvement in the project increased steadily following ACES selection and authority to proceed. Ultimately, the difference in views between range safety and JPCSO led to our making a presentation to the Patrick commanding officer in December 2001. A major factor in the commanding officer’s decision was a suggestion by the judge advocate general that the commanding officer of the airfield was responsible for the UAV while it was on the base and during all phases of flight.

As a result of this meeting, the commanding officer commissioned range safety to “make this mission safe.” If he had said, “make this mission work and keep it safe,” the final result might have been different. I feel that mission success must always be mentioned along with safety. If safety is the only objective in the challenging type of work that NASA does, we might as well just stay home.

This decision placed the ACES project under EWR 127-1 requirements that the Altus could not fully satisfy. Discussion about tailoring requirements to suit the ACES project did not lead to substantive negotiations. Patrick Range Safety believed there was not enough data to make those changes and remained most comfortable viewing the UAV within the rocket paradigm they knew well. A number of issues made it difficult or impossible to get beyond this impasse:

Some suggestions for mission operations that proved unfeasible emerged during the discussions with range safety. One, ocean-only flights, was scientifically unacceptable. The installation of a redundant flight termination system (FTS) or a fully qualified FTS was technically feasible, but cost and schedule prohibitive. It also became clear that the activation and coordination of the Range Operations Control Center or an independent range operations center would be imposed on ACES operations, a scientifically, operationally, and financially impractical requirement. The open-ended discussions, with no clear indication of convergence, tended toward “paralysis by analysis.”

Seeing “the writing on the wall” at Patrick, we investigated a number of alternate deployment locations that would satisfy a reduced set of science goals: other commercial Florida airports, Eglin Air Force Base, Mayport Naval Air Station, and Naval Air Facility Key West (NAFKW). The likely availability of other sites and the lack of progress in our discussions at Patrick made it fairly easy to request a final decision from Patrick Range Safety, although the principal investigator was initially reluctant, not wanting to give up the highly desirable groundbased lightning imaging system available at Kennedy. (ACES was run in PI mode, giving the principal investigator ultimate authority on major project decisions.) But the many restrictions to flight operations being levied on the mission convinced the principal investigator that a decision should be made by Patrick Range Safety without further analysis. The ACES project sought a final decision from Patrick and received a definitive no-fly decision in April 2002.

Our experience at Patrick taught us some important lessons:

The no-fly decision allowed the ACES project to focus its full attention and resources on obtaining an acceptable alternate deployment site. Steve Wegener, the UAV science demonstration program manager who had oversight of ACES and another UAV project, suggested we investigate the Naval Air Facility Key West. It provided the best science opportunity in Florida outside the Kennedy area, with excellent weather and ground-based instrumentation infrastructure. It offered the best opportunity for project success, since the FAA felt that it would be the easiest place for them to give us a certificate of authorization approval for flight. It also helped that the NASA-sponsored Crystal-Face project to investigate cirrus clouds had established contacts there and was planning to conduct their campaign from NAFKW in July. Exemplifying the “OneNASA” principle, Crystal-Face helped ACES slide in behind its campaign. 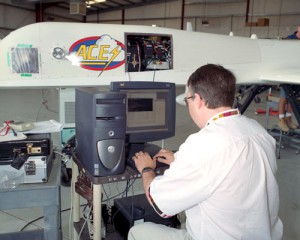 The ACES UAV is worked on before flight.
Photo Credit: NASA

NAFKW treated the Altus UAV like any other aircraft flown from their facility. The Marshall Space Flight Center aircraft safety officer contacted his counterpart at NAFKW and addressed safety issues in one phone call. The NAFKW aviation safety officer was satisfied on the condition that an FAA certificate of authorization would be established prior to flight. This interaction typified our relationship with NAFKW. The distribution of responsibility and authority to the chief officers and on-site contractors made it easy to get things done. We readily developed a memorandum of agreement (MOA) with NAFKW for the ACES project using the Crystal-Face MOA as a model. Good communication among all parties involved made a huge difference.

ACES’s well-defined project and implementation planning had been the basis of its competitive selection. Our final proposal included a detailed implementation plan, work breakdown structure, and schedule. Throughout development execution, the project team maintained a clear understanding of the facilities, logistics, expendables, and schedule required for success. When unexpected and ultimately insurmountable problems developed at the proposed primary deployment site, our comprehensive plan and schedule gave us the flexibility, time, resources, and clarity of purpose needed to make a successful transition to a scientifically acceptable alternative deployment site.

The critical point in the project was our request for a final decision by Patrick Range Safety. It is obviously not desirable to base important decisions on insufficient data, but acquiring information takes time and resources—not making a decision because you think you don’t know enough has its own costs and consequences. Both an early bad decision based on insufficient data and a well-informed decision made too late can damage a project. Given our difficulties at Patrick, our decision was fairly clear-cut, but it did take time to get buy-in from all interested parties. Fortunately, we made a decision early enough to allow us to recover to a site that was not as scientifically desirable as Patrick but was good enough to accomplish most of our science objectives. We all have to make such decisions in a project, assessing risk, resources, and schedule in light of project goals. Knowing when to make key decisions is part of what makes project management as much an art as a science.

Tony Kim has worked at the Marshall Space Flight Center for eighteen years. He is currently responsible for the advance capability and technology development for the Deep Throttling Engine, a liquid oxygen and hydrogen expander closed cycle rocket engine with throttling capability for safe and soft landing on the moon.