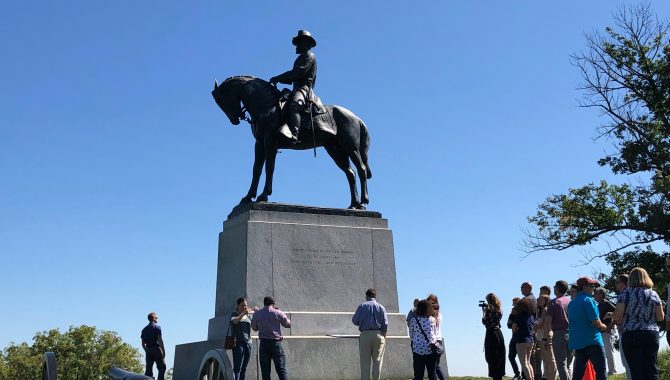 Douglas Mastriano, Ph.D., a decorated combat veteran who retired as a colonel after 30 years in the U.S. Army, recently toured the Gettysburg Battlefield with members of NASA’s technical workforce in APPEL Knowledge Services’ Systems & Engineering Leadership Program (SELP).  Here are some of the lessons learned that Mastriano, a published military historian, shared with the group.

Know where to lead from

Major General John F. Reynolds, considered by many to be one of the best generals in the Army of the Potomac, was killed on Day 1 as he directed troop and weapons placement near the frontlines on McPherson Ridge.  Reynolds was highly regarded by his troops and his loss had an enormous impact. A leader needs to know when to inspire from the front and when to get a better overview from a higher vantage point.

Know when to step out

On Day 1, Union troops trapped Confederate soldiers in a steep, rocky railway cut. Lieutenant Colonel Rufus Dawes, seeing the emerging massacre, stepped forward—literally—to the edge of the deep cut to order the Confederates to surrender. “In that moment, any one of these confederates could have aimed at him. As a leader, sometimes you have to step out and take all the risk,” Mastriano said.  Dawes accepted that risk and about 400 soldiers surrendered.

Lee ordered General Richard Ewell to take Cemetery Hill, key high ground near the center of town, during Day 1. But Lee’s orders—take the hill “if practicable”—were misinterpreted by Ewell as discretionary. “For Robert E. Lee, that’s not discretionary,” Mastriano said, noting that Lieutenant General Thomas “Stonewall” Jackson or Lieutenant General James Longstreet would have rushed to take the hill, where Ewell delayed hours, waiting for reinforcements. “That miscommunication, I believe, falls on Lee. Lee didn’t adjust his communication in a way where Ewell … understood.” This miscommunication cost the Confederates key high ground.

Know when to give second chances

Often during the Battle of Gettysburg, unlikely leaders emerged. Major General Oliver O. Howard, for instance, was given the nickname Uh-Oh Howard for mistakes made during the Union defeat at Chancellorsville in May 1863. In Gettysburg, however, after Howard was given a second chance to lead, he made a key decision to rally retreating Union forces on Cemetery Hill, a decisive strategic move on Day 1.

Howard’s calm, assured demeanor—as well as his actions—inspired retreating Union soldiers to occupy Cemetery Hill on his orders, rather than retreat further down the Baltimore Pike to safety. “As a leader, how do you step forward in the midst of chaos and crisis and inspire people? It’s by how you react to the situation. If you’re running around with your hair on fire, it’s not going to encourage confidence,” Mastriano said.

Get team buy-in, especially if the team is dysfunctional

General George Meade was given command of the Army of the Potomac following Major General Joseph Hooker’s loss at Chancellorsville. Because Meade had no time to change Hooker’s dysfunctional team, he met nightly with his crops commanders to poll them about either continuing the battle or retreating to fight at another place and time.

On Day 1, it became clear that Gettysburg was evolving from an unauthorized skirmish on the outskirts of town into the decisive battle of the Civil War. Meade correctly anticipated that roads would become overwhelmed by traffic and ordered his supply wagons off to the side to speed troop movements. “General Lee, for some reason, never gives the order to get the wagon trains off the road. [He] is very good at envisioning how will the situation look at this point in the future. What kind of contingency plan do we need to have? For some reason, Lee is not doing that so well here,” Mastriano said. As a result, Major General George Pickett’s Division was missing during Day 2, stuck behind 11 miles of wagon trains.

When a leader sees dysfunction developing in an organization, they must step up quickly to stop these issues from damaging the enterprise.  When Major General Robert E. Rodes staged an assault on the Union flank on Day 1, the brigades of Colonel Edward A. O’Neal and Brigadier General Alfred Iverson, both ineffective leaders, suffered severe losses directly related to their poor leadership. “Rising leaders in NASA and elsewhere keep an eye on this kind of stuff. It could destroy your organization, your enterprise if you don’t step in and fix it.”

Don’t isolate yourself from your team

By Day 3, Lee isolated himself from the dissenting opinion of Longstreet about the viability of what became known as Pickett’s Charge. Lee was also isolated from battlefield updates that would have let him know the field was rapidly changing against the Confederates.  “So, Lee is alone with his bad plan on Day 3,” Mastriano said.

Meet with subordinates on the ground

Unlike Lee, who gave orders and stayed well behind the lines, Meade rode the battlefield and met with his commanders often. This meant that by the end of Day 2, Meade was familiar with the exact positions his men held, the losses they had suffered, and their outlook about fighting on.

Streamline the chain of command

When Meade took control of the Union Army, although he made very few immediate personnel changes, he quickly streamlined the chain of command, reducing his direct reports. This reorganization helped the Union Army adjust to rapidly changing conditions.

Don’t trust renegade subordinates to be too far from you

Major General Daniel Sickles, a powerful New York City politician was nearly untouchable to Meade because of the favor he held with President Abraham Lincoln as a rare senior Democrat leader who strongly supported the war. Sickles bears the distinction as the first American to employ a temporary insanity defense to be acquitted of murder. On Day 2, Sickles made a staggering error in judgement that could have cost the Union the battle. Against orders, he marched his corps about a mile away from Union lines, into an exposed peach orchid, where his troops were decimated by a Confederate attack. Sickles lost a leg in the attack and didn’t command again. “Sickles was a trouble-maker. [He] knows that he’s untouchable. But General Meade should have kept an eye on him,” Mastriano said.

Although it has been 156 years since the final shots were fired in the Battle of Gettysburg, these lessons—and more like them—are still as relevant today. When large groups of people come together to achieve a common goal, the leaders who succeed are the ones who aren’t condemned to repeat the past.