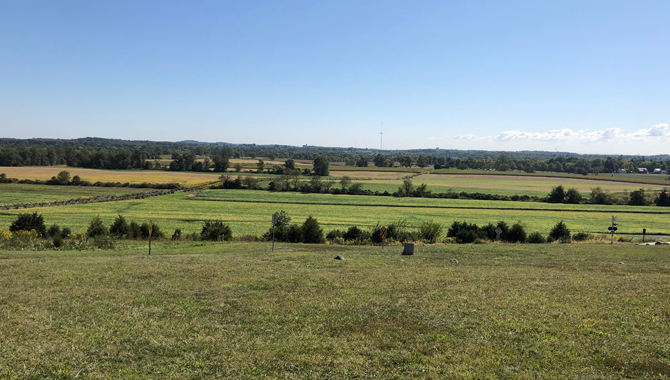 The Battle of Gettysburg began on the rolling hills to the west of town on July 1, 1863.
Credits: Insight Staff

More than 1 million people a year visit the Gettysburg National Military Park, a nearly 4,000-acre swath of preserved land in Gettysburg, Pennsylvania. They are drawn by myriad reasons, but many come to study the rich lessons in leadership to be discerned among the rolling hills, which are maintained today to resemble how they appeared in 1863.

Just 106 years separate the Battle of Gettysburg from the Apollo 11 Moon landing—106 years that included unprecedented technological advances such as the telephone, the automobile, the radio, and the television. Yet many of the leadership lessons from Gettysburg have echoed through time and are as relevant today as they were then.

That is why the current colleagues in APPEL Knowledge Services’ Systems & Engineering Leadership Program (SELP) traveled to Gettysburg recently. The program focuses on developing leadership ability within NASA’s technical workforce.

Attendees walked key areas of the battlefield with Douglas Mastriano, Ph.D., a decorated combat veteran who retired as a colonel after 30 years in the U.S. Army.  Mastriano, a published military historian, was a professor at the U.S. Army War College in Carlisle, Penn., and is now a state Senator from Pennsylvania’s 33rd district.

In 1863, “Robert E. Lee’s army… they are a winning organization. They’re a winning enterprise. So, they think, ‘We’re going to go up here and the Yankees will be defeated,’ ” Mastriano said. “But what’s the problem? The environment is different. This is not Virginia. There’s a big difference on both sides.”

Lee arrived in Gettysburg in the aftermath of an important victory in early May at Chancellorsville, in which he divided his army of 60,000 troops and soundly defeated 106,000 Union forces under the command of Major General Joseph Hooker. The victory came at high cost, however. Lee’s Army of Northern Virginia suffered 12,764 casualties—about 21 percent. Lieutenant General Thomas “Stonewall” Jackson was among the losses.

The Army of the Potomac had its own challenges at Gettysburg. General George Meade, who was known for his volatile temper, had assumed command just days before the battle, inheriting an organization known for dysfunction and poor morale. Meade shared little in common with his predecessor, the raucous, reckless Hooker, but had to use the existing command structure as best he could, winning over and motivating commanders.

Meade thought, “I don’t have time to disrupt the organization, the enterprise, so I’m going to use the people I have to make things happen,” Mastriano said. “That’s a hard situation to be in.”

The tour for SELP members followed the battle chronologically, from the ridges west of town where fighting began on July 1, to the steep rocky slopes of Little Round Top where Day 2 hung in the balance, to near the copse of trees where the remaining soldiers in Pickett’s charge where captured or killed on July 3.

“My key takeaway from the Gettysburg Leadership Experience was how applicable the lessons and insights from the battle are to our work and leadership at NASA. One quote from the tour was ‘New things are old things happening to new people.’ We need to take the time to learn from the past to prevent mistakes and enable future success,” one SELP attendee said.

At each stop on the tour, Mastriano not only explained the military history of what happened there, but how that impacted the overall battle, and how it illustrated leadership lessons that can be applied by the SELP members and other leaders today.

For instance, at McPherson’s Ridge, Confederate Major General Henry Heth was marching toward Gettysburg for supplies on the morning of July 1, under orders from Lee not to engage in a decisive battle. Heth’s troops were met by the Union Cavalry under the command of Brigadier General John Buford. Heth’s pride prevented him from disengaging. Although Buford was outnumbered by more than 3 to 1, his troops had a key technological advantage—they were armed with the uncommon carbine rifles that fired 9-12 shots a minute, compared to Heth’s Springfield rifles, which fired three. This technological advantage enabled Buford to protect the high ground until reinforcements arrived.

“How do [you] stay ahead in your field? How do you embrace emerging technology, understand its application and … use it effectively?  That’s a challenge we all face in our enterprises,” Mastriano said, adding that technology can give an enterprise an edge against a competitor that is superior in strength, motivation, and funding.

Mastriano explained that Lee invaded the North looking for a decisive victory on a field of his choosing that could have prompted foreign nations to recognize the Confederate States of America and perhaps ended the war. But Lee didn’t recognize how profoundly different the environment was from Chancellorsville. He was cut off from his cavalry as a skirmish quickly became a battle, facing a foe who was rapidly adapting and had a technological advantage.

“Understanding the environment helps you understand the problem,” Mastriano said. “What are we trying to fix?”

This was one of the key takeaways for another SELP attendee, who said, “General Lee’s environment at Gettysburg was changing faster than he had time to adapt his plans.  A leadership lessons learned is that [we] need time to reflect and learn from changing environments to ensure programs/projects remain on target for mission success.”

Many of the key leadership lessons Mastriano discussed during the tour—know where to lead from, know when to step forward as a leader, communicate your expectations clearly—are lessons every successful leader has had to learn and practice.

The SELP is a multi-faceted program to build leadership skills among NASA’s technical workforce. To learn more about the program, click here.