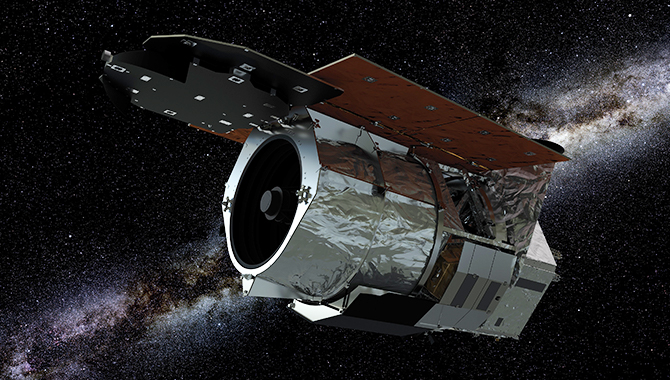 WFIRST will have Hubble’s precision with 100 times the field of view.

Some of science’s most difficult questions, such as the rate at which the Universe is expanding, the locations of other planets that might support life, and the nature of dark energy, will likely come into sharper focus later this decade as NASA launches the next generation of space telescopes. Earlier this month, NASA cleared the Wide Field Infrared Survey Telescope (WFIRST) to move forward, with the development of engineering test units and models.

WFIRST was the top priority large space mission in the 2010 Decadal Survey of Astronomy and Astrophysics by the National Research Council of the National Academy of Sciences. With the same precision as the Hubble Space Telescope, but a field of view 100 times larger, a single image from WFIRST could contain 50 million stars.

“Looking at a large fraction of the sky allows you to get a more complete accounting of, for example, the stars in the Large Magellanic Cloud, which is the nearest galaxy to us, or the stars in the galactic bulge. So, you can do a much more complete accounting in a much shorter amount of time,” said Scott Gaudi, an exoplanet astronomer at The Ohio State University, in a NASA video. Gaudi is a principal investigator on the WFIRST Formulation Science Working Group. “The particular thing I’m interested in using WFIRST for is to actually do a statistical census of planetary systems in our galaxy.” 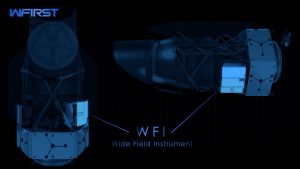 WFIRST has been designed to help scientists detect Earth-like planets through two techniques known as microlensing and coronagraphy, which allow the telescope to compensate for brighter stars to focus on dimmer planets. Scientists will also use WFIRST to test several theories about why research indicates the Universe is expanding at increasing speed. One theory involves dark energy, and WFIRST will enable scientists to study dark matter and dark energy in several ways, including by observing galaxies to discern what effects dark matter and energy might exert on their shapes and distribution in the Universe.

The WFIRST’s primary mirror will be 7.9 ft in diameter, the same size as the primary mirror on the Hubble Space Telescope. But where Hubble’s primary mirror weighs 1,825 pounds, advances in technology have reduced that figure significantly for WFIRST—to 430 pounds. WFIRST will communicate with Earth via a High Gain Antenna 5.5 ft tall and capable of transmitting 1.375 terabytes of data per day. WFIRST will be powered by two fixed and four deployable solar panels with a total of 360 sq ft of surface area, generating 4,100 watts.

The telescope will carry two instruments on a primary mission now planned to last 5 years—the Wide Field Instrument (WFI) and the Coronagraph Instrument (CI). The primary instrument is the WFI, an infrared imaging and spectrometry device with 18 sensors, each 4,096 x 4,096-pixels, giving WFIRST 100 times the capacity of Hubble. The team estimates the WFI will measure the light from a billion galaxies and lead to the discovery of about 2,600 new exoplanets during the telescope’s primary mission.

The CI will employ deformable mirrors and special masks to block incoming light from a star, enabling the team to view distant, dim planets 1 billion times fainter than its star. It will be, by far, NASA’s most advanced coronagraph in space, with 1,000 times the capacity of previous coronagraphs, enabling the team to analyze the light reflected from planets’ surfaces for clues to their characteristics.

To demonstrate the amazing capabilities of WFIRST, the team created a simulation of an iconic 2015 image of the Andromeda galaxy created by joining together 400 Hubble images taken over more than three years. That same image, when recreated by WFIRST would require only two images and three hours.

“We have spent the last couple of decades getting images at high resolution in small parts of nearby galaxies,” said Benjamin Williams, a research professor at the University of Washington in Seattle, and a member of the WFIRST Formulation Science Working Group.

“With Hubble you get these really tantalizing glimpses of very complex nearby systems. With WFIRST, all of a sudden you can cover the whole thing without spending lots of time,” said Williams, in a NASA press release.

WFIRST is planned for a mid-decade launch, following into space the James Webb Space Telescope (JWST), currently set to launch in 2021. JWST, with a massive 21.3 ft primary mirror of ultra-lightweight beryllium, is a showcase of technological innovation that will peer into the Universe in unprecedented ways and will greatly expand scientific understanding.