Back to Top
Home/28/ASK Magazine/Einstein for Children: Learning and Teaching
Marc Spiegel

Explaining to other people something complicated that you are working to understand yourself can be difficult. That was my situation when I began developing my Einstein Alive! program to introduce Einstein and the theory of relativity to students from kindergarten through middle school. Now, years later, I have performed the show for enthusiastic audiences from the Arctic Circle to the Florida Everglades. Developing the performance has taught me a great deal about teaching and understanding. I think my experience may offer some useful hints to technically savvy people who need to communicate their expertise to others.

I am not a scientist or engineer. I am a storyteller, a writer of sorts, often of rhyme, and a mostly self-taught performer with an audience-participatory style learned on the streets of San Francisco in the 1970s. But I have always had a sense of awe about the universe. My difficulty with math and my unfortunate experience with high school physics discouraged me from pursuing science and gave me a fuzzier view of the cosmos than a scientist might have. I have always found nontechnical books on physics fascinating and inspirational, though I rarely retain technical details. 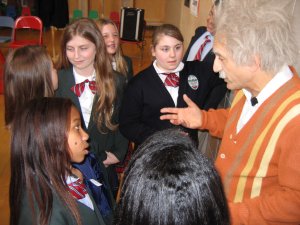 In 1995, I was a storyteller sharing mostly original tales in schools up and down the East Coast. One way I promoted myself was by attending showcases where school representatives came to watch ten-minute presentations. I heard about a showcase in Queens, New York, run by a colorful arts-in-education promoter named Joan Lavin. When I called her, she said I could be in her showcase but told me she could get me more work if I played a historical character.

I was married with two young children and a mortgage. More work sounded like a reasonable idea, but it would require me to stop what I was doing and dedicate myself to researching the life of another human being. Which one? The answer came quickly: Albert Einstein. I have always remembered the newspaper headline the day he died. I was very young and knew nothing about science, but I understood that someone very important had passed away. When I told Joan of my choice, she said, “I guess that will work, but don’t do the science.” I was not ten minutes into my research, however, before I found Einstein telling me, “Personal facts are not important to understand a man like me. What is important are the adventures inside my mind.” Science had to be the centerpiece of any Einstein portrayal I might do.

I immediately saw two challenges. Audience participation is the heart of my performance style; I felt this performance had to be a visit with Einstein in which he would talk about his life and the adventures in his mind and answer questions from the audience. Somehow I had to develop the confidence to become Einstein and present him as alive and vibrant. The second challenge was the science. I had to learn enough about Einstein’s scientific thinking to find a natural, entertaining, and understandable way of presenting it to my young audiences.

I began to read everything I could about and by Einstein, which was a great deal indeed. I solved the first challenge by having Einstein inform the audience that he was dead: “They have dredged me up again!” (I presented the idea more gently to my elementary school audience: “Don’t worry, I am not a ghost! I won’t go ‘boo’ to you. / The actor fixes up his hair and puts the mustache on with glue.”) This would be Einstein brought back to life by the actor/storyteller Marc Spiegel. If Einstein ever had trouble answering a question, he could always blame Spiegel.

Learning and presenting the science was the greater challenge. I made two important discoveries in the process. First, when experts explain something, they often leap over information they consider to be elementary. I have been stopped in my tracks by the simple phrase from which we derive placed between two equations where I see no obvious connection. This happens with verbal explanations as well. It’s an easy trap to fall into; I initially made my own similar assumptions about what my young audience knew. 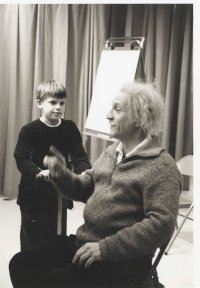 Marc Spiegel explains the theory of relativity with the aid of a young participant.
Photo courtesy Marc Spiegel

Fortunately, different writers make different leaps; if you read enough explanations, you can usually fill in the gaps. Herein lies the best advice I have learned from Einstein: the two most important qualities a scientist must have are curiosity and determination.

The second thing I discovered was that most physicists are generous with their time and delight in answering questions. I especially thank Dr. William Parke at George Washington University who, among the countless ways he has helped me, pointed out an assumption I was making. I assumed my young audience knew what friction was when his college students’ answers on exams showed that they sometimes did not. That insight led to one of the most successful sequences in my presentation.

As I gained familiarity with the science, I became more and more concerned about how to present it to children. This led me to try to explain the material while I was still learning it, which, I found, greatly aided my own learning process. Indeed, I have come to believe that if you want to learn any subject, start teaching it to children.

The rudimentary level of my knowledge actually became one of my greatest assets. I had to start on the most fundamental level. To explain the theory of relativity, I first had to vividly explain what the word “relative” meant. I talked about relativity with everyone I met, mostly people who had not opened a scientific book in decades. Along the way a good friend, singer-songwriter Michele Valerie, joked that kids in my audience would probably say, “Relative? I have an Aunt Rose who’s a relative.” That’s where I began.

In retrospect I realize that I wrote this show as I might write a story. The ideas that the audience must understand are like characters in a story. “Relative” was my first character. I needed to introduce this character to the audience in a way they could easily identify with: “Is anyone here a relative? Does anyone here have a brother or a sister?”

Suddenly, Einstein is not lecturing about science, he is asking a personal question: “Who here has just one brother or sister and that one brother or sister is younger than you? Were you a brother before your sister was born? No. Your being a brother depends upon your sister being born. It depends on something else. That is what the word ‘relative’ means: to need something else.”

The rudimentary level of my knowledge actually became one of my greatest assets. I had to start on the most fundamental level. To explain the theory of relativity, I had to first vividly explain what the word “relative” meant.

I introduced “relative” as something familiar—a brother or a sister. But this character “relative” has more layers. Einstein goes on to say, “Other things are relative. Tallness is relative. Am I short or am I tall?” Ninety-nine percent of the time one or two students in the audience will call out “short,” which offers a valuable tool in teaching anything: humor. “Who said ‘short?’” Einstein asks indignantly, bringing one or two students up to stand next to him. What is relative now is not a sibling, but the more abstract concept of tallness. Einstein shows that relative to the students, he is tall, but relative to the ceiling, he is short.

I introduce the second character in the story as Einstein concludes: “When something is relative, you cannot understand anything about it unless you compare it to something else; this something else is called a frame of reference.” Einstein has the students on stage stretch out their arms out and make a frame with their index fingers and thumbs.

Then I introduce my third character, motion, and the problem of motion. For this I created a 3′ x 3′ platform on wheels with a brake lever, a push rod, and a chair bolted to it. The machine rolls parallel to the audience, and anyone sitting in the chair faces the audience.

Most people do not think that motion has a problem. Einstein, however, presents it as one in his Evolution of Physics, and that is how I wanted to introduce the theory of relativity: as a solution to a problem, the answer to a puzzle.

Relative to you now I am moving,
for that you need no map
But relative to Ms. Padgorndny, I’m not moving
I’m sitting still right in her lap.

Are there lessons in my experience for “explainers” who don’t perform in schools? I don’t mean to suggest that real scientists should use song and pantomime to communicate their ideas, but I think many of the same basic principles apply: don’t assume your listeners know everything you consider obvious; look for vivid, everyday analogies to explain difficult concepts; interact with your audience; and use the power of story—its potential for mystery, suspense, humor, and engagement—to reach your listeners.

Marc Spiegel began writing and performing stories in narrative verse as a political science graduate student at Harvard. He has appeared on television, at schools, festivals, and corporate events. He has performed at several venues, including the Kennedy Center, the International Children’s Festival, and the Smithsonian Institute, and he was a featured performer in the White House Millennium Celebration.