The Apollo Era was marked by towering achievements in science, engineering, and space exploration. Those achievements were the culmination of the work of more than 400,000 talented people over a decade and produced volumes of valuable information, as relevant now as it was 50 years ago. APPEL Knowledge Services, working with the NASA CKOs and knowledge community, has created this resource to assist researchers, facilitators, and the technical workforce learn from this rich history. 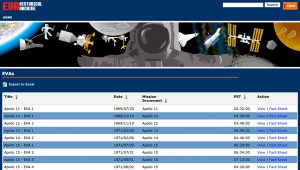 Apollo EVA Fact Sheets (NASA Only)
A series of documents that provide details and facts, including dates of launches, Moon walks, spacesuit information, definitions of acronyms, and information about hundreds of activities surrounding the spacewalks.

Apollo Flight Journal
Presently covers eleven human flights of the Apollo program, relating the parts of the missions not on the lunar surface. As a “living document” it will continue to grow and evolve. 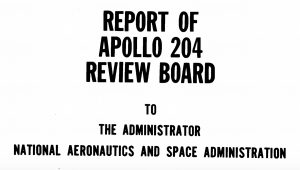 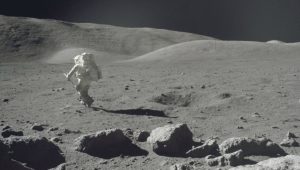 Apollo Lunar Surface Journal
Record of the lunar surface operations conducted by the six pairs of astronauts who landed on the Moon from 1969 through 1972. 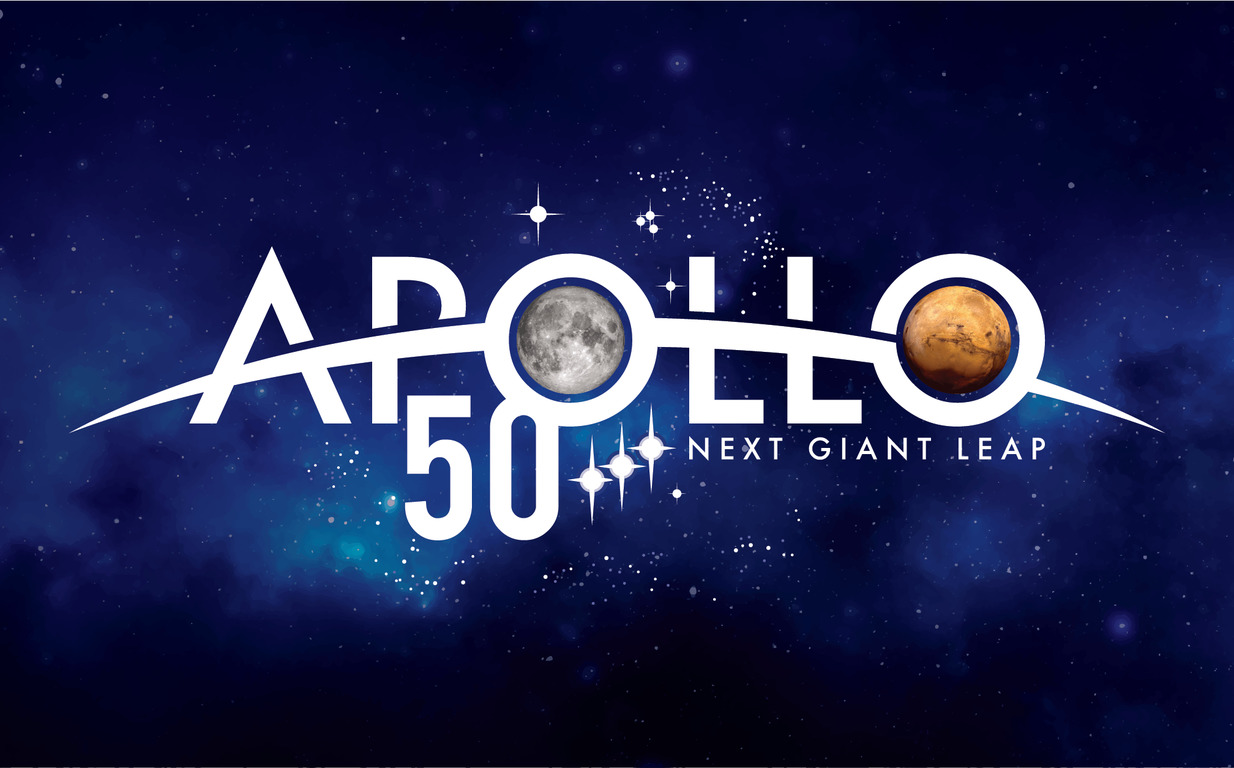 Apollo Resources from within the Langley Technical Library (NASA Only)
Links to Apollo resources that were collected as part of the 50th anniversary of the first manned lunar landing. 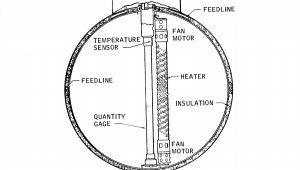 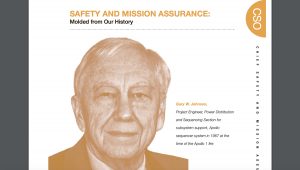 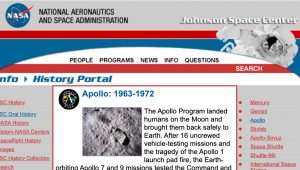 History Collection–Apollo
The Apollo Program landed humans on the Moon and brought them back safely to Earth. Learn all about NASA’s Apollo missions here. 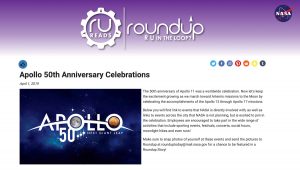 JSC Apollo-era Activities
Experience the Apollo 11 launch in real time, along with other Apollo videos from links at the bottom of this collection of events at Johnson Space Center and in Houston to celebrate the 50th Anniversary of Apollo 11 and later Apollo missions. 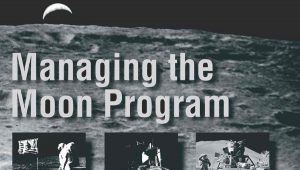 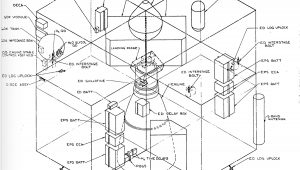 MSC Apollo 13 Investigations Team–Final Report
Summary of the results of an evaluation of LM Related Systems, conducted by NASA and CAC in support of Apollo-13 Investigation. 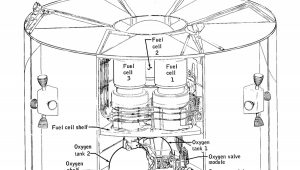 MSC Apollo 13 Investigations Team–Spacecraft Incident Investigation
The main substance of the investigation of the cryogenic oxygen tank 2 anomaly is contained in this report. 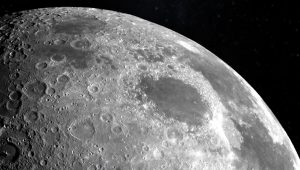 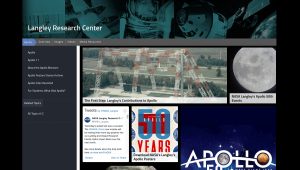 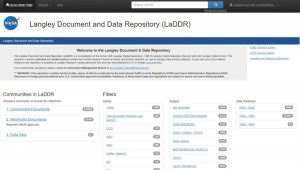 Langley Document and Data Repository (NASA LaRC Only)
Full text access to core aerospace documents dating from the late 1800s to the present.

Apollo 1-Challenger-Columbia
As former NASA Flight Director and Space Shuttle Program Manager, Wayne Hale has compiled a list of lessons learned based on the Apollo 1, Challenger and Columbia disasters. 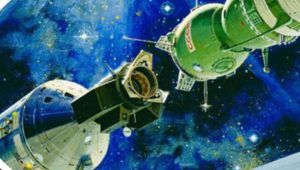 Asynchronicity
During descent, the crew of the Apollo-Soyuz mission did not activate the Apollo’s Earth Landing System (ELS) at the correct altitude. As a result, toxic propellant fumes entered the Command Module (CM) through open cabin pressurization valves before splashdown, threatening the lives of America’s first orbital ambassadors. 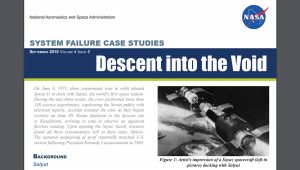 Descent into the Void
On June 6, 1971, three cosmonauts rose to orbit aboard Soyuz-11 to dock with Salyut, the world’s first space station. Upon opening the Soyuz’ hatch, rescuers found all three crewmembers still in their seats, lifeless. 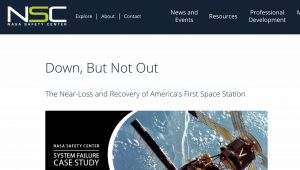 Down, But Not Out
Once Skylab was in orbit and controllers initiated start-up procedures, it became apparent that the vehicle suffered damage during launch. Skylab engineers scrambled to understand what went wrong and what they would do to fix it. 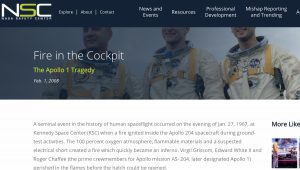 Fire in the Cockpit
A seminal event in the history of human spaceflight occurred on the evening of Jan. 27, 1967, at Kennedy Space Center (KSC) when a fire ignited inside the Apollo 204 spacecraft during ground-test activities. The 100 percent oxygen atmosphere, flammable materials and a suspected electrical short created a fire that quickly became an inferno. Virgil Grissom, Edward White II and Roger Chaffee (the prime crewmembers for Apollo mission AS- 204, later designated Apollo 1) perished in the flames. 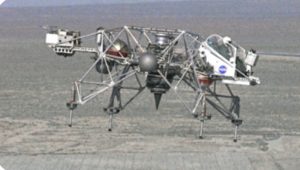 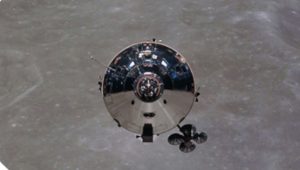 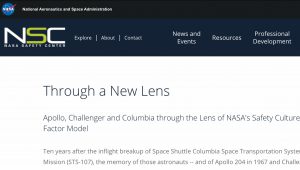 Through a New Lens
Ten years after the inflight breakup of Space Shuttle Columbia Space Transportation System Mission (STS-107), the memory of those astronauts–and of Apollo 204 in 1967 and Challenger in 1986–who died in the line of service continues to serve as a reminder to the agency. 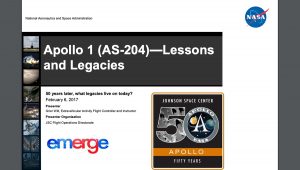 Apollo 1 (AS-204) — Lessons and Legacies (NASA Only)
January 27, 2017 marked the 50th anniversary of the Apollo 1 fire. The NASA Safety Center hosted a session outlining the changes instituted as a result of the disaster and NASA’s safety cultural has greatly improved as a result of the lessons learned from the tragedy. 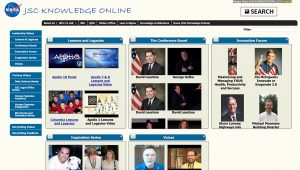 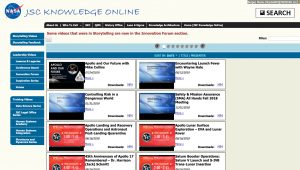 Apollo Storytelling (NASA Only)
A collection of videos from various Apollo era events; such as, one on one sessions with astronauts, discussions about space suits, sessions with managers during the Apollo era, etc. 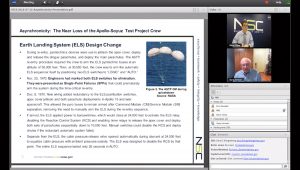 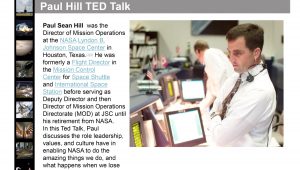 Do Deliberate Leadership Values Matter? (NASA Only)
This is an inspirational TED Talk by former NASA Director of Mission Operations Paul Hill in which he reminds us as managers and leaders to be “deliberate.” 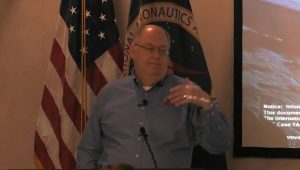 Risky Business: Learning from NASA’s Past Accidents (NASA Only)
NASA’s Marshall Space Flight Center’s Shared Experience Forum Series brought Wayne Hale, Jr., former Space Shuttle Program manager, for a special event for Safety and Mission Assurance personnel and the greater NASA community. He discussed the accidents that shaped NASA’s history — Columbia, Challenger, Apollo 13 and Apollo 1 — as well as the mistakes that led to those accidents and how you can avoid making the same mistakes in your career.

Suggestions for additions/modifications to the listings should be sent to:
larc-tranquility-basement@mail.nasa.gov