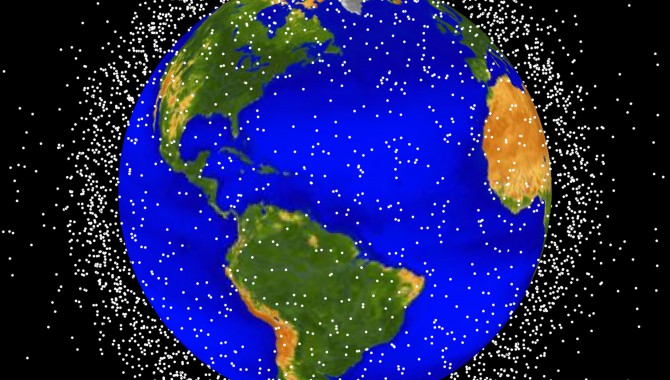 Like most technological advancements, the space age has left a sea of refuse in its wake. Spread throughout near-Earth space, this man-made orbital debris, ranging from micron-sized particles to intact launch-vehicle stages tens of meters in length, has accumulated to a point where it now threatens the safety of human spaceflight and the reliable operation of hundreds of robotic satellites. 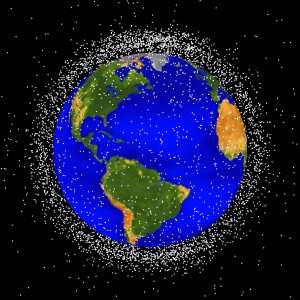 During 2009 both the International Space Station and the Space Shuttle had to conduct evasive maneuvers to avoid colliding with orbital debris. NASA’s Cloudsat satellite, part of a multisatellite Earth-observation network to monitor the planet’s environment, also had to alter course to prevent a potential collision, as did several commercial spacecraft.

Due to the extremely high relative velocities of space objects, typically 10 km per second or more in low-Earth orbits, even small debris can impair or terminate a spacecraft’s mission. Most robotic and piloted satellites are vulnerable to debris as small as 5 mm in size. Today, such debris number in the millions.

At the direction of the White House, in 1997 NASA teamed up with the Department of Defense to create U.S. Government Orbital Debris Mitigation Standard Practices, based upon the existing NASA debris-mitigation guidelines. The principal elements of these standard practices seek to

After a multiyear coordination with the U.S. aerospace industry, these practices were adopted in February 2001. Since orbital debris is a problem for all space-faring nations and organizations, however—and one that cannot be solved solely by the United States—international agreement to limit the creation of orbital debris is necessary. Consequently, NASA took a leading role in establishing the first set of international orbital debris–mitigation guidelines, which were produced in 2002 by the Inter-Agency Space Debris Coordination Committee (IADC), an association of the national space agencies of ten countries as well as the European Space Agency. In 2007 the United Nations adopted its own orbital debris–mitigation guidelines, consistent with the U.S. and IADC standard practices and guidelines. 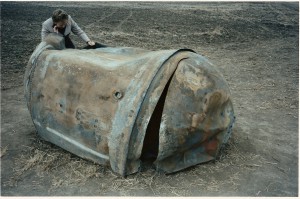 Implementing these mitigation measures can be simple or complex. In the initial decades of the space age, little thought was given to the release of miscellaneous hardware in orbit, particularly during launch and deployment phases. Springs, covers for sensors and motors, spin-up yo-yos, remnants of explosive bolts, and similar objects were frequently left in Earth orbit. Today, many missions are debris-free by design. For example, sensor covers are hinged or attached to the vehicle by short tethers. When instances of unexpected debris occur after a launch, an investigation is undertaken to identify the source of the debris and to institute corrective measures.

Prior to 2007, accidental explosions of abandoned spacecraft and launch-vehicle stages were the principal source of hazardous orbital debris. Residual propellants and pressurants were found to be a leading cause of the fragmentations. Battery explosions were also the source of numerous debris. To prevent these explosions, passivation—the removal of all stored energy—of spacecraft and launch vehicles at the end of a mission is now widely practiced by the international aerospace community. As a result, this source of orbital debris has been markedly curtailed.

Since the 1970s, NASA studies have shown that in the long term the principal source of orbital debris will be accidental satellite collisions. This assessment was underscored in February 2009 when a collision between an operational U.S. communications satellite and a defunct Russian communications satellite produced more than two thousand large and tens of thousands of smaller, yet still hazardous, debris in the worst accidental satellite collision in history.

Orbital debris is not only a potential hazard to space operations; reentry can also pose a risk to people and property on Earth.

To reduce the potential for future accidental collisions, the postmission orbital lifetimes of spacecraft and launch-vehicle stages in low-Earth orbit (below 2,000 km altitude) should be limited to twenty-five years or less. This guideline was first devised by NASA and later adopted by the U.S. government and other foreign space agencies. In 2005 NASA maneuvered its Earth Radiation Budget Experiment Satellite and its Upper Atmosphere Research Satellite to lower orbits to accelerate their fall back to Earth and to reduce their potential for being involved in accidental, debris-producing collisions. In 2008 the Department of Defense performed similar maneuvers for its GEOSAT Follow-On satellite, as did France with its SPOT 2 satellite in 2009.

For satellites in very high orbits, maneuvers to low altitudes are not feasible. Geosynchronous satellites at an altitude of nearly 36,000 km should be placed in disposal orbits that will remain at least 200 km above the geosynchronous orbital regime. Such maneuvers, which normally require less than 10 kg of propellant, are now performed by the majority of geosynchronous spacecraft.

Orbital debris is not only a potential hazard to space operations; reentry can also pose a risk to people and property on Earth. On average, one known man-made object falls back to Earth each day. Most of these objects are small fragments and burn up during reentry. Components of spacecraft and launch-vehicle stages that do survive are statistically likely to land in the water or on large, sparsely populated areas, such as Siberia, the Australian Outback, or the Canadian tundra. 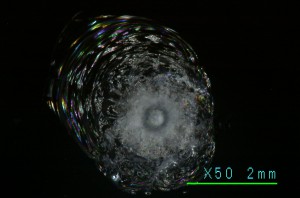 However, by encouraging or requiring space system operators to limit satellite stays in low-Earth orbit, the number of reentries of spacecraft and launch-vehicle stages will increase. Again based upon NASA analyses, NASA, the U.S. government, and some foreign space agencies attempt to limit human casualty risks from reentries to 1 in 10,000 per event.

For vehicles that might pose greater risks, two options are available: directing a controlled reentry over a broad ocean area or designing the vehicle to be more completely destroyed during reentry. This is normally accomplished by component redesigns and material selection. For example, lower-melting-temperature materials like aluminum are much less likely to survive reentry than higher-melting-temperature materials like titanium, stainless steel, or beryllium.

NASA strongly promotes a “design for demise” philosophy when developing or procuring new satellites. Satellite survivability is first addressed by the preliminary design review milestone, at which time surviving components are identified and modified, if feasible. The Goddard Space Flight Center leads engineering efforts to develop satellite components that will demise, including propellant tanks and reaction-wheel assemblies, objects which historically have survived reentry.

Green engineering and operations are essential to preserving the near-Earth space environment for future generations. The U.S. and international aerospace communities have been proactive in addressing the threat of the increasing orbital debris population and the risks to people and property from reentering debris. NASA has led this activity by first devoting resources to thoroughly understand the technical issues and then by developing effective and acceptable policies and guidelines. NASA has also worked closely with the international community to ensure that the U.S. aerospace industry is not placed at an economic disadvantage as a result of implementing orbital debris–mitigation measures.

In the future, remediation of the near-Earth space environment (that is, the removal of large spacecraft and launch-vehicle stages) might be necessary to prevent the uncontrolled growth of the debris population due to accidental collisions. In December 2009, NASA and the Defense Advanced Research Projects Agency jointly sponsored the first international conference on the removal of debris from Earth orbit. The technical and economic challenges of orbital debris removal remain daunting, but NASA scientists and engineers are up to the task.