Back to Top
Home/ASK the Academy/Volume 3/3.12/This Month in NASA History: 1965 “Rapid Fire” Gemini Flights 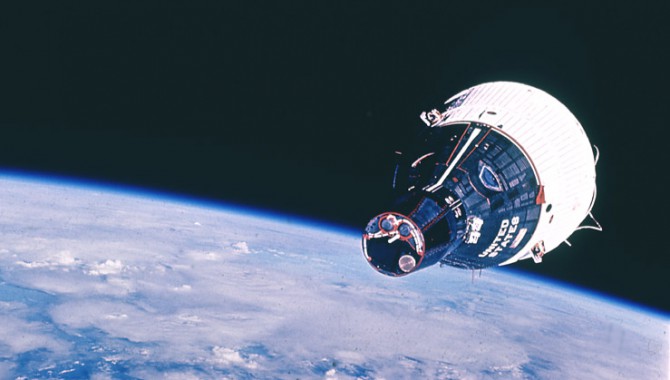 This month marks the 45th anniversary of the Gemini VI and Gemini VII flights, which performed the first manned space rendezvous.

NASA never meant to fly Gemini VI and VII at the same time. With the decision to go to the moon using a lunar-orbit rendezvous approach, Gemini VI set out to practice rendezvous maneuvers, while Gemini VII planned to carry out extended-spaceflight experiments for two weeks. 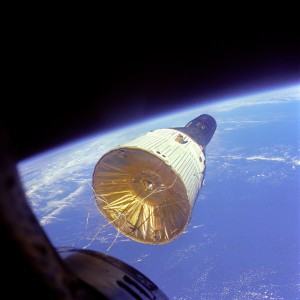 This photograph, taken by Gemini VII crewmembers Jim Lovell and Frank Borman, shows Gemini VI in orbit 160 miles (257 km) above Earth. The main purpose of Gemini VI, crewed by astronauts Walter Schirra and Thomas Stafford, was the rendezvous with Gemini VII. The main purpose of Gemini VII, on the other hand, was studying the long-term effects of long-duration (up to 14 days) space flight on a two-man crew. The pair also carried out 20 experiments, including medical tests. Credit: NASA

Set to launch on October 25, 1965, the Gemini VI spacecraft was ready to fly when the Gemini Agena Target Vehicle it was supposed to rendezvous with exploded on its maiden voyage to orbit. Spirits were sinking after the explosion until Walter Burke, spacecraft chief, asked his deputy, John Yardley, “Why couldn’t we launch a Gemini as a target instead of an Agena?”

Burke’s “rapid-fire” launch proposal was not popular. The concept had been explored previously, but the logistics of flying two manned missions simultaneously was considered extremely unsafe. Burke’s suggestion eventually won out, and a new mission was born: Gemini VI would rendezvous with Gemini VII, while it carried out its extended-spaceflight experiments. Gemini VII would launch first, then Gemini VI.

The Gemini VI crew, Commander Frank Borman and Pilot James Lovell, had to conduct 20 scientific, technological, defense, and medical experiments during their 14-day journey in space. Eight experiments were medical, one of which required the astronauts to log their bodily intake and wastes for 9 days before flight, 14 days during, and 4 days afterward. They would also test new spacesuits during the flight. Gemini VII launched on December 4, 1965.

On December 12, 1965, Gemini VI astronauts Walter “Wally” Schirra and Thomas Stafford suited up a second time for their rendezvous mission. The engines ignited, but the launch vehicle failed to take off due to an electrical anomaly.

Technicians immediately went to work on the launch vehicle failure. The cause turned out to be a plastic cover that was left on the gas generator port of a check valve. The generator was cleaned and replaced. Now NASA was racing against the clock to launch before Gemini VII came back. 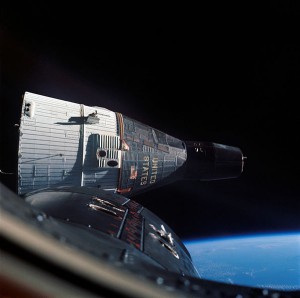 This photograph of the Gemini 7 spacecraft was taken from Gemini 6 during rendezvous and station keeping maneuvers at an altitude of approximately 160 miles above the Earth. Gemini 6 and Gemini 7 launched on December 15, 1965 and December 4, 1965, respectively. Walter M. Schirra, Jr. and Thomas P. Stafford on Gemini 6 and Frank Borman and James A. Lovell on Gemini 7 practiced rendezvous and station keeping together for one day in orbit. Credit: NASA

The third launch was the charm. Gemini VI successfully left Earth on December 15, 1965. Once in orbit, Schirra and Stafford spent the next six hours catching up to Borman and Lovell. Through careful maneuvering, Gemini VI and VII eventually achieved their rendezvous with no relative motion between them. For the next three Earth revolutions, the two craft got as close as 0.30 meters apart.

On December 16, Gemini VI splashed down. The rendezvous mission was successful. Borman and Lovell persevered through boredom and exhaustion until they safely landed December 18, 1965.

1965 was a good year for human spaceflight. As Robert Gilruth said, “Since March, we have put 10 men in orbit and brought them back. And we have accomplished the major part of the Gemini space objectives at this point in the program. The long duration, which was a major objective, some of us didn’t really think you could go 8 or 14 days in that spacecraft….we have seen the men return in good shape with all their tasks done….We have seen EVA this year in Gemini, and we have seen rendezvous. We have seen controlled reentry demonstrated, the controlled reentry technique that is so important to Apollo, and we have seen accomplished a whole raft of scientific experiments.”

NASA was getting ready to go to the moon.