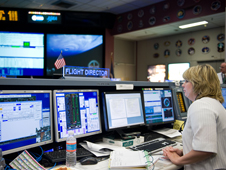 Heather Rarick joined the Academy team in September 2010. Looking for a new challenge, Rarick answered a call for applications from the Office of the Chief Engineer. “I had a good understanding of the Mission Operations Directorate and of Johnson Space Center, but I felt that I needed to broaden my experience,” she said.

Prior to her current assignment, Rarick had been a flight director in Mission Control at Johnson Space Center since 2006. Before becoming a flight director, she chaired the Russian Joint Operations Panel, a group that addresses operational activities on the International Space Station and long-term resolution of U.S. and Russian operational issues for human spaceflight.

Rarick’s experience working on the International Space Station has been instrumental in coordinating and supporting the Academy’s international activities and events. She is also working closely with the Academy Director Dr. Ed Hoffman and playing a central role in the Academy’s efforts to expand its services through technology enabled learning. “I look forward to gaining greater insight into the agency and how it operates,” Rarick said.

Rarick received her Bachelor’s of Science degree in aerospace engineering from the Pennsylvania State University in 1987 and her Master’s in Business Administration from the University of Houston-Clear Lake in 1992.