Back to Top
Home/4.3/ASK the Academy/Volume 4/Academy Case Study: The Deepwater Horizon Accident Lessons for NASA 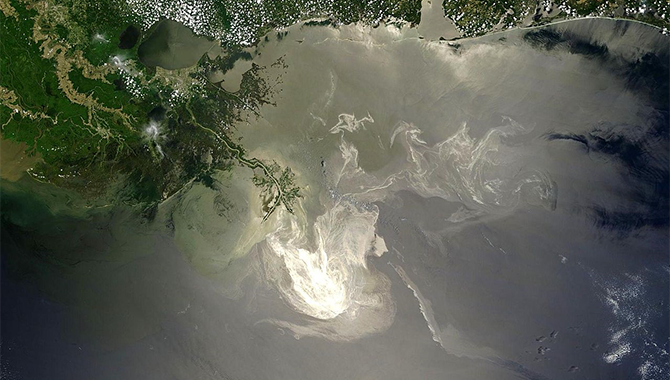 Sunlight illuminated the lingering oil slick off the Mississippi Delta on May 24, 2010.

The events leading up to the Deepwater Horizon accident offers several cautionary lessons for NASA.

Offshore oil drilling is complex work that employs state-of-the art technology in an extremely dynamic environment. It involves using a drilling rig to penetrate the ocean floor, and installing and cementing pipe to secure the wellbore (well hole). Drilling mud is used to lubricate the drill bit and control pressure exerted by hydrocarbons unearthed during drilling. The rig drills progressively deeper until it reaches a depth where returns from the well can be maximized. At that point, drilling stops, the well is cemented and capped, and the rig is removed. The well owner returns later (typically with a less expensive production rig) to collect the oil.

On April 20, 2010, the Deepwater Horizon rig was finishing up a drilling job at the Macondo lease site, a plot in the Gulf of Mexico 49 miles off the coast of Louisiana. At the time, the job was 43 days over schedule and $21 million over budget due to additional leasing fees. At 9:49 p.m., the rig exploded, leading to 11 deaths and the worst oil spill in U.S. history.

The lessons from this tragedy are potent reminders of the pitfalls that can plague complex programs and projects in any industry, even (perhaps especially) those with long track records of success. Prior to the accident, Deepwater Horizon was one of the best-performing deepwater rigs in BP’s fleet. In September 2009, it had drilled to a world-record total depth of 35,055 feet. As of April 2010, it had not had a single “lost-time incident” in seven years of drilling. The deficiencies that set the stage for this tragedy—government oversight, disregard for data, testing, changes to processes and procedures, safety culture, and communications—are common to other high-stakes, high-visibility accidents and failures.

The text below includes edited excerpts from “Deep Water: The Gulf Oil Disaster and the Future of Offshore Drilling,” the final report to President Obama by the National Commission on the BP Deepwater Horizon Oil Spill and Offshore Drilling. (The report is in the public domain.)

View a decision timeline for the events leading up to the explosion.

Changes to Processes and Procedures