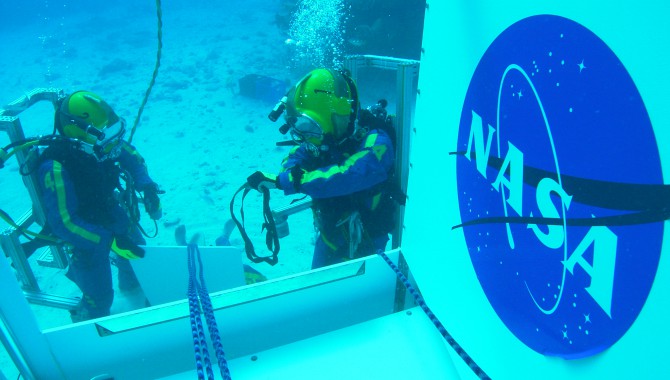 Humanity’s dream of exploring the wonders of space—to look for life on other planets and to better understand our place in the universe—has not diminished over the years. But advances in human space exploration beyond low-Earth orbit have been slow to emerge. 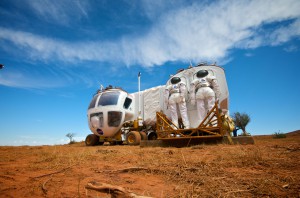 Space Exploration Vehicle docking with Cabin A for a simulated rescue mission. This simulated mission was part of the 2009 Desert RATS held at Black Point Lava Flow in Arizona.
Photo Credit: NASA

NASA’s new human space-exploration enterprise requires a strategy that will enable us to explore new worlds, develop innovative technologies, and foster burgeoning industries, all while increasing our understanding of Earth and our solar system. It will allow us to work on objects in Earth’s orbit such as the International Space Station (ISS) and satellites while also exploring objects such as near-Earth asteroids, the moon, Mars, and Mars’s moons. But traveling to and living on these destinations will require us to develop cutting-edge technologies and new ways to work in space to help us survive and thrive in these forbidding, faraway places.

Using lessons learned from the Department of Defense and the sub-sea industry’s rapid-prototyping activities, NASA created a management environment for the rapid development of several prototypes at very low costs. The philosophy was to establish a series of iterative design-build-test projects, built on the principle that NASA is at its best working with a clear, simple, and understandable vision and a limited amount of time to achieve that vision. The projects focus on producing functional prototypes of increasing fidelity so systems integration issues can be understood early through rigorous design, build, and human in-the-loop testing.

The project teams are multi-center, multidisciplinary groups of capable and motivated individuals working together virtually from their home NASA centers. Several systems were developed using this philosophy, including the Space Exploration Vehicle (previously the Lunar Electric Rover), a habitat demonstration unit, Robonaut 2, a portable communications tower, and an extravehicular activity suit port.

In the past, many people believed the best way to explore the lunar surface would be similar to the Apollo missions: astronauts in space suits using a rover with no enclosed cabin. Others believed a small rover with an enclosed, pressurized cabin that allowed astronauts to function without being in their space suits—but with the ability to quickly put on or take off a space suit—would be more effective. This debate continued for about a year with experts arguing over presentation charts until, at a workshop break, three people came up with a plan to develop a low-cost, low-fidelity version of the rovers needed to test the competing concepts. 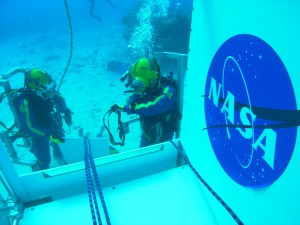 NASA Aquanaut crew performing demonstration of incapacitated crewman recovery on the side hatch of the SEV during the NEEMO 14 mission.
Photo Credit: NASA/Bill Todd

Key to SEV’s success was a high-level set of architecture questions to be addressed and a clear vehicle concept. The project manager also had the flexibility to develop a project structure and choose team members. Because of the tight funding and schedule, this team was kept very small, with members having much more responsibility than on larger NASA hardware-development projects. This empowered the task leaders and required them to be creative in their areas of responsibility, instilling a feeling of greater accountability. They also had more agility since the process for making changes involved much less review and paperwork than typical NASA projects.

The SEV project was able to make important design decisions in a thoughtful but cost- and time-efficient manner, due mainly to the small team and the prototype vehicles not being flight vehicles. Quick decisions in the early stages of development—when mistakes are less expensive and less consequential—gave the project team an understanding of how those decisions interact and how they manifest in hardware.

For example, the initial design of the suit port on the SEV consisted of a manual latching mechanism, on the principle of keeping the design as simple as possible. The test at the Desert Research and Technology Studies (Desert RATS) demonstrated that the mechanism design did not perform well in the environment. These results formed the basis for changing the mechanism from the manual mechanical latch to an electrically powered latch. Learning this early on in the design phase allowed the change to be made with minor cost impact.

Driving a rover around a center’s rock yard isn’t enough to reveal the true operations and limitations of a vehicle designed for long traverses. It is important to test the systems in an integrated, operational field mission to ensure relevant test results. These extreme environments greatly enhance our ability to analyze concepts in simulated conditions and enable experiments with long-range and long-duration expeditions. Additionally, members from the NASA mission and ground operations team as well as international space agencies, industry, academia, and other government agencies take part in these tests. Each test refines our understanding of the systems and human capabilities needed to successfully explore beyond Earth’s orbit while developing the teamwork and methodologies to ensure that future space systems are efficiently built to accomplish their tasks.

NASA has developed a process for these tests of system and operational concepts on Earth and on ISS, known as analog missions. These missions are carried out in representative environments that have features similar to the missions’ target destinations. These can include locations underwater, in the arctic, on terrestrial impact craters, in the desert, on volcanic lava flows, and on ISS. Two of the larger missions are the NASA Extreme Environment Mission Operations (NEEMO) and Desert RATS, or D-RATS. 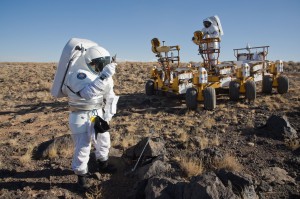 An astronaut and a geologist don spacesuits to test an unpressurized version of a lunar rover concept that enables them to easily disembark and explore. The test was part of the 2008 Desert RATS held at Black Point Lava Flow in Arizona.
Photo Credit: NASA

NEEMO uses the only underwater research facility in the world: NOAA’s Aquarius habitat. Working in partnership with NOAA, NASA uses the habitat because it provides some of the best conditions for practicing space operations in a harsh environment, giving astronauts a broad knowledge and awareness of risks, issues, and objectives associated with human space-exploration missions. There have also been numerous discoveries made during NEEMO missions on human health, engineering, telemedicine, space operations, education, and public outreach that directly relate to spaceflight needs and are being implemented with each mission.

The NEEMO mission tests are developed with the same rigorous timelines as current shuttle and ISS missions. Upon completion of the latest NEEMO mission, the NEEMO mission commander, Astronaut Chris Hadfield, who has flown on two Space Shuttle flights and was the first Canadian to walk in space, stated that this mission was the closest to a real spaceflight mission as you could get on Earth. This rigor allows us to make informed decisions about design changes before project development begins.

For example, the size of side hatches changed significantly between the first and second SEV designs based on testing configurations at the NEEMO and D-RATS analog field tests. The tests were designed to address the human factors group’s belief that a larger hatch was needed for mission operations. Results showed that the astronauts had no issues using the smaller hatch size for standard or emergency operations in a low-gravity environment. This enabled the design to be changed to the smaller hatch size, thereby reducing the overall mass of the architecture vehicles that contain a hatch. This, in turn, reduces the cost of the architecture due to less propellant required throughout the architecture phases. The cost of these tests was minor compared with the cost impact if this information was learned during the flight vehicles’ development.

D-RATS field tests have become large missions where multiple prototype systems are tested together to evaluate concepts about integrated operations. Using the Black Point Lava Flow and SP Mountain areas in Arizona—because their terrain, geologic features, size, and dusty environment are similar to what would be encountered on surfaces in space—allows NASA to test prototypes under realistic communications and operational scenarios.

Quick decisions in the early stages of development—when mistakes are less expensive and less consequential—gave the project team an understanding of how those decisions interact and how they manifest in hardware.

The latest D-RATS field test focused on the simultaneous operation of two SEVs, including new ways of performing surface-science operations. Over a fourteen-day period, the astronaut and geologist crew teams performed a science- and exploration-driven course of more than 300 km under different communications and operations scenarios, only egressing to perform simulated extravehicular activities: to collect geological samples or to work in the habitat demonstration unit.

One of the major concerns about the SEV was that its size was relatively small. There were people who did not think it was large enough for a fourteen-day mission; they thought it would be too small for two astronauts to work in the confined space for that period of time due to psychological issues. The ability to perform a fourteen-day mission in an SEV would have a major impact on the mission architecture, reducing the number of heavy-lift launch vehicles needed for a lunar campaign. Upon completion of the test, the crew stated that not only was the size adequate for a fourteen-day mission, but they felt as though it would be suitable for a thirty-day mission. A mission spanning thirty days would allow much more exploration of the lunar surface at a greatly reduced cost.

Validating rapid prototypes of innovative concepts through analog field tests has greatly advanced NASA’s understanding of more effective methods for human space exploration. In addition, the process has provided an example of how future human space-exploration systems can be developed at a greatly reduced cost. Rather than sitting through design reviews and trying to understand how systems would be used, these approaches provide realistic insight into system and operational requirements, guiding design changes early in the development phase and saving the time and cost associated with changing designs and contracts later on.