Back to Top
Home/4.5/ASK the Academy/Volume 4/This Month in NASA History: Lunar Roving 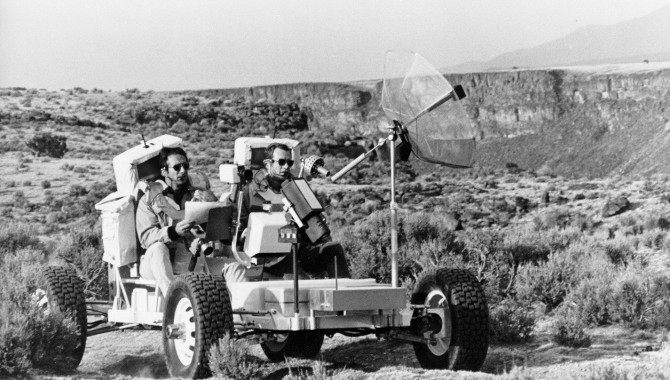 "Dave Scott (right) and Jim Irwin (left) drive the Geologic Rover ( aka Grover) along the rim of the Rio Grande Gorge at Taos, New Mexico. At this location, the Rio Grande Gorge is about the same width as Hadley Rille at the Apollo 15 landing site. During this training exercise, Dave and Jim conducted a geologic investigation similar to the one they later did at Hadley. Ulli Lotzmann notes that the 1g trainer was also known as the Geology Rover or Grover." Credit: NASA

Forty years ago this month, the Apollo 15 astronauts took the first lunar rover for a ride.

Just after the last of the ticker tape fell from the Apollo 11 “Welcome Home” parade, NASA put forth another engineering challenge: the lunar rover. It was July 1969 and NASA wanted the new vehicle by April 1971, just in time for the Apollo 15 mission. NASA, General Motors, and Boeing had 17 months to build the world’s first Lunar Rover Vehicle (LRV).

“I really wondered about the length of time we were given to do it,” said Gene Coward, the LRV chief engineer at Boeing, in a Discovery Channel episode of Moon Machines, “but I was told to make it happen as far as the engineering went, and that’s what we did. Night and day, it seemed like.”

In addition to the short schedule, the team wrestled with a number of challenges. Perhaps the most memorable was literally reinventing the wheel. Standard, pressurized rubber tires wouldn’t work because of their extreme response to temperature change. Getting a flat tire was out of the question. Engineering ingenuity kicked in. The wheel was largely designed by Dr. M.G. Bekker and his General Motors team. The final wheel was 81.8 cm in diameter and weighted 5.4 kg. The tires were made to work with the moon’s rocky, dusty surface and not against it, flexing in response to the terrain. High-grade steel was hand-woven into a mesh, which would pick up the fine lunar soil but not trap it.

The rover also had to be lightweight. The weight requirement was set at 400 lbs maximum. Landing on the moon involved hovering above the surface for a short period of time in order to find the right spot before settling down. More mass meant more fuel to keep the lander afloat, which meant less hover time. (Apollo 11 landed with only 11 seconds of fuel remaining.)

Another major challenge was the rover’s deployment once the astronauts landed on the moon. Much like a fold-out bed, the rover was housed in the lunar module bay. This was roughly the equivalent of folding a Volkswagen Beetle into the side of the Apollo capsule.

Less than a year before the rover’s scheduled delivery, the Apollo 13 failure disrupted production until that crew returned home safely. Work resumed, and the rover was delivered to NASA on March 10, 1971. Originally projected to cost $19 million, the price tag came out to $38 million.

The final product was an electric vehicle designed to operate in low gravity. There were four vehicles in total, three of which successfully operated on the lunar surface. Several models were made for the purposes of engineering design and subsystem integration, astronaut instruction and training, mass model testing, and vibration testing. Made of aluminum alloy 2219 tubing welded assemblies, the vehicle had a mass of 210 kg (approximately 400 lbs). It was 3.1 meters long, had adjustable footrests, a Velcro seatbelt, and a large mesh antenna. The vehicle’s top speed was 10 miles per hour.

Apollo 15 launched for the moon on July 26, 1971. Astronauts David Scott, James Irwin, and Alfred Worden crewed the twelve-day mission, which returned to Earth on August 7, 1971. With them, they brought home the “Genesis” rock, a chunk of lunar crust subject to years of study for clues about the origins of the moon and Earth.

The roving vehicle operated successfully for the two missions that followed Apollo 15. Astronaut Harrison “Jack” Schmitt said of the vehicle, “…the Lunar Rover proved to be the reliable, safe, and flexible lunar exploration vehicle we expected it to be. Without it, the major scientific discoveries of Apollo 15 and 17 would not have been possible, and our current understanding of lunar evolution would not have been possible.”

Dave Scott (right) and Jim Irwin (left) drive the Geologic Rover ( aka Grover) along the rim of the Rio Grande Gorge at Taos, New Mexico. At this location, the Rio Grande Gorge is about the same width as Hadley Rille at the Apollo 15 landing site. During this training exercise, Dave and Jim conducted a geologic investigation similar to the one they later did at Hadley. Ulli Lotzmann notes that the 1g trainer was also known as the Geology Rover or Grover.