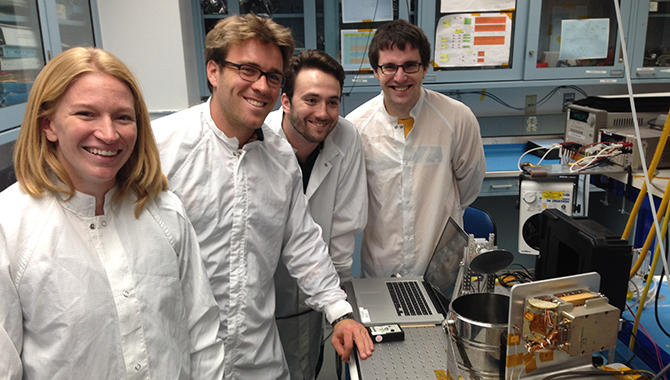 A first-time project manager is leading a team of young engineers to launch an innovative CubeSat mission.

Only weeks into his role as the systems engineer for the CubeSat Hydrometric Atmospheric Radiometer Mission (CHARM) project, Alex Kadesch was asked if he would be interested in taking on another job: project manager. Having been at the Jet Propulsion Laboratory (JPL) for less than one year, Kadesch had never managed a project of this caliber, but was open to taking on the challenge and accepted.

In this new role, Kadesch was in charge of a joint mission between JPL and Ames Research Center. He quickly realized the importance of understanding the work of his teammates in order to best enable them to do their jobs. “The challenge is to put yourself in somebody else’s shoes and know the problems that they’re faced with,” said Kadesch. “It’s really important that I do whatever I can to make my team as productive as possible.” 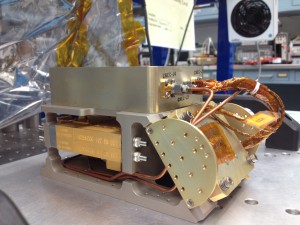 The radiometer that will fly on the RACE CubeSat. It will measure microwave radiation at 183 GHz.
Photo Credit: NASA / Jet Propulsion Laboratory

As the project has progressed, Kadesch has come to another realization: as project manager, he may not be completing the actual engineering or scheduling work of his teammates, but he was ultimately responsible for all of their work in the end. Most of his time is dedicated to other tasks such as mitigating risks, he explained, and “thinking about things nobody else is thinking about.”

Kadesch’s training and experience on CHARM is the product of two programs: the Phaeton Program at JPL and Project HOPE (Hands-On Project Experience), which is a collaboration between the Science Mission Directorate and APPEL at NASA Headquarters. CHARM is one of a series of projects designed to offer young engineers experience and training across the full lifecycle of a project and to build technological capability for the agency.

The mission will advance the radiometer system from a Technology Readiness Level (TRL) 4 to TRL 7 and the receiver subsystem from a TRL 4 to a TRL 6. The instrument is passive, requiring low power and making it an ideal payload for a 3U CubeSat. The radiometer will measure microwave radiation at 183 GHz to observe Earth’s water vapor line, which is important for understanding Earth’s water cycle and energy budget. Typically, this sort of data is collected using much larger satellites such as Aquarius and others found in the A-Train constellation of satellites. Equipping a CubeSat with this radiometer payload is less expensive and lower risk, serving as a step toward disrupting the paradigm for capturing space-based Earth science measurements.

Among the many lessons Kadesch has learned throughout the project, one of the most salient pertains to the review process.

“One of the things I learned for CHARM was that it didn’t necessarily make sense to wait for one of these larger reviews to get somebody to help you out,” said Kadesch. For their first review, he explained, the team spent too much time preparing, trying to make the slides “pretty.” Their time would have been more wisely spent on design work that needed to get done. In response to this experience, the team instituted what Kadesch called “table-top” reviews. These reviews were a PowerPoint slide-free zone and placed more value on getting the right information communicated to the whole group instead of formatting their slides. “We got a lot of our review board members involved early on in the project, which [required a] minimal time contribution to make sure that we’re going down the right path, and then we could minimize the amount of time spent in the larger review,” Kadesch explained. 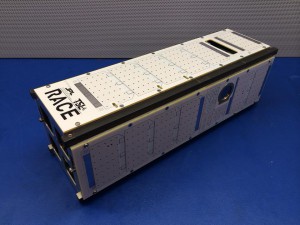 The CubeSat spacecraft being built by the University of Texas, Austin team. The JPL team will integrate their instrument into this spacecraft.
Photo Credit: Texas Spacecraft Lab

About seven months into the project, the JPL team went through a transition phase where the responsibility of the CubeSat bus development transitioned from Ames to the University of Texas at Austin. “As a project manager, that was probably the toughest part for me,” said Kadesch. The team utilized the transition period to regroup before their collaboration with UT officially started. The project was then renamed to RACE (Radiometer Atmospheric CubeSat Experiment).

Recently, the team completed the instrument Integration and test phase. “It’s a constant state of stress,” Kadesch said. “Every little problem becomes a big one.” But the worry is worth it. With the current launch date set for 2014, Kadesch is excited to see the mission fly successfully.

While different than what Kadesch originally planned, the Phaeton-HOPE experience has proven to be lasting and beneficial, especially the opportunity to see a project from start to finish. “I want to continue doing challenging things,” said Kadesch. “I really enjoy doing stuff that nobody has ever done before.”