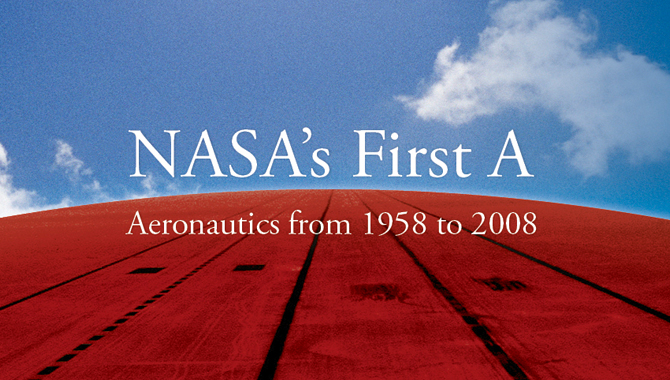 The golden age of aeronautics research is an institutional memory, and like all memories it can get a little fuzzy, cautions aviation and technology historian Dr. Robert Ferguson.

“Institutions often develop a sense of nostalgia based on selective memories,” said Ferguson, author of the agency’s latest publication NASA’s First A: Aeronautics from 1958 – 2008, during the NASA History Office’s December lecture event at NASA Headquarters. In conjunction with the recent release of his book, Ferguson discussed some of the long-term changes that have influenced how aeronautics research is done and perceived.

Government-funded aeronautics research has evolved since the early days of the National Advisory Committee for Aeronautics (NACA), began Ferguson. Established in 1915, NACA was the leading research organization for aeronautics, pushing the envelope with the first supersonic flight and paving the way for spaceflight with the development of the blunt-body concept. Early aeronautics laboratories were fairly insulated from the politics of Washington and had a deep technocratic culture, explained Ferguson. Leaders came from within the organization, rising through the ranks, and sometimes occupying their roles for one, two, or even three decades.

The introduction of the space program and its integration with aeronautics in 1958 left some researchers wary of the impact it would have on their portfolio and culture, but most saw it as opportunity. While aeronautics research did not receive a great deal of oversight during the Apollo program, it came to the forefront during the 1970s oil crisis, which spurred national initiatives to increase efficiency in the aviation industry. The old aeronautics meritocracy gave way to the centralization of governance, formalization of programs and management, and an increase in accounting measures that live on today, explained Ferguson.

So was there a golden age? Possibly, he said, “but we shouldn’t idealize it too much. It obscures what is a complex story that is tied to particular historical circumstances.” While the culture of the early years is viewed with nostalgia, Ferguson cautioned that it did have its limitations when it came to readily shifting to new fields, embracing new laboratories, and adopting new research methodologies.

After fielding questions from the audience, Ferguson closed his presentation with the observation that there are benefits and drawbacks to both the “golden age” aeronautics research practices and the introduction of accountability and control measures. Finding a balance between the two is the real challenge.