Back to Top
Home/APPEL News/APPEL News Digest/This Month in NASA History: An International Initiative Expanded the Frontiers of Science 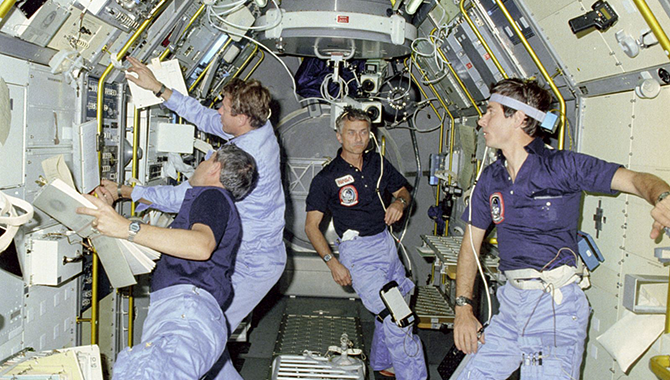 On Nov 28, 1983, the Columbia lifted off from Cape Canaveral on its ninth mission (STS-9). But this mission was distinct from earlier ones. For the first time, the shuttle was home to Spacelab, an international on-orbit research facility. Over its 22-mission lifespan, Spacelab was remarkable not only for the scientific achievements it enabled but for its role in opening up opportunities for manned spaceflight to countries beyond the United States and Soviet Union.

The first steps toward this bold international effort had been taken more than a decade earlier. With the last Apollo mission flown in 1972, NASA was open to exploring a cooperative, multinational approach to future human spaceflight endeavors. In 1973, a Memorandum of Understanding was signed by NASA and the European Space Agency (ESA) (then called the European Space Research Organisation (ESRO)) under which Europe was responsible for funding, designing, and developing the first reusable modular on-orbit laboratory to be housed within the space shuttle. In return for producing the research facility, Europe would share the initial mission with NASA. Ultimately, 10 European countries were involved in the development of Spacelab.

One of the major attributes of Spacelab was its flexibility. Designed to accommodate a range of different scientific missions, the modular system consisted of several distinct parts that could be combined in various configurations. The pressure module was the principal laboratory. Scientists could conduct research within the module, which was 4.1 meters in diameter and 7 meters long, without wearing cumbersome spacesuits. The roof of the pressure module included a scientific airlock through which experiments could be exposed directly to space. These experiments were mounted on unpressurized U-shaped aluminum pallets. Up to five pallets could be flown on a single mission. Pallet-based experiments were controlled via the pressure module or through an additional element called the igloo, which provided a smaller pressurized environment for experimentation that was used in the rare event the pressure module was not on board.

Certain experiments required extremely high accuracy in pointing instruments, such as large astronomical telescopes, at targets including stars, the sun, and Earth. An Instrument Pointing System (IPS), which flew on three missions, was developed to address these needs. A tunnel linked the space shuttle cabin with the pressure module. Together, the cabin and module worked to maintain a 1-bar atmosphere, providing atmospheric pressure similar to that of sea level. Air from the shuttle cabin was cleaned with lithium hydroxide and charcoal, cooled, and diffused into the module.

Spacelab was a multidisciplinary scientific resource. Its maiden voyage was considered a verification flight: a test of the laboratory’s systems and ability to host complex experiments on orbit. Nonetheless, the flight carried 38 scientific instruments, which the crew used to conduct more than 70 different experiments across five areas of scientific inquiry: materials science, space plasma physics, life sciences, astronomy and solar physics, and atmospheric physics and Earth observations. The research was conducted on behalf of 13 different countries, including multiple European nations, the United States, and Japan. Some of the research involved observation of the environment outside of Spacelab: looking at Earth to study its terrain and atmosphere or examining the sun or stars. Other experiments were performed exclusively within the pressure module and did not involve the external environment. During the course of the flight, the Columbia deliberately performed maneuvers to facilitate experiments as needed.

STS-9 was intended to last only nine days, the amount of time that Spacelab was powered to conduct research. But that changed as NASA and ESA realized that Spacelab consumed less power than expected. The mission was extended by a day, becoming the longest space shuttle mission to date. Despite a few problems—friction between Spacelab and the shuttle payload bay caused loud (but inconsequential) bangs, and landing was delayed for eight hours due to computer failures—the mission was declared a success. The majority of experiments conducted on Spacelab were completed, and the lab itself proved to be a viable, effective on-orbit research facility. STS-9 also marked the first time that a European astronaut, Ulf Merbold from West Germany, flew in space.

Overall, Spacelab offered scientists a number of unique attributes for research: a low-gravity, high-vacuum environment for experimentation, wide-angle views of Earth, and access to space phenomena such as plasma. Scientific areas that had never been researched in space before could be explored through Spacelab. Over the course of its 22 missions, 800 distinct scientific investigations were performed on Spacelab. The modular facility was retired in 1998, but its legacy lives on today: Spacelab taught scientists how to conduct experiments in an orbiting laboratory, which they have been doing ever since on the International Space Station. Spacelab was managed by Marshall Space Flight Center.