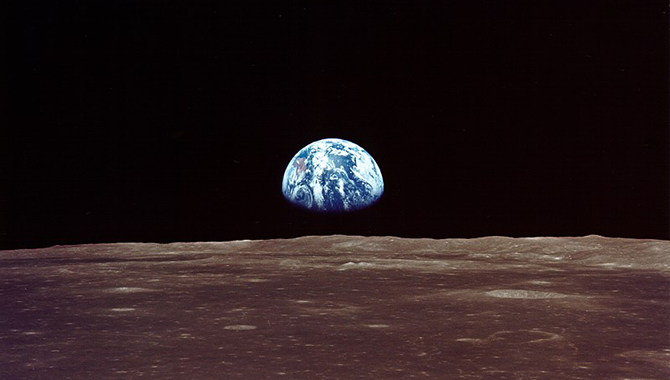 Picture of Earth taken from the moon by the Apollo 11 crew.

The crew of Apollo 11, the first mission to land humans on the moon, expected a hostile lunar environment. Instead, they stepped out into a surprisingly inviting world.

On 16 July 1969, Apollo 11 blasted off from Cape Canaveral to fulfill a national objective: land humans on the moon and return them safely back to Earth. Command Module Pilot Michael Collins inserted the Columbia into lunar orbit three days later. Finally, on 20 July, Commander Neil Armstrong and Lunar Module (LM) Pilot Edwin “Buzz” Aldrin descended from the Columbia to the moon in the LM Eagle at more than 70 feet per second.

“The Eagle has landed,” Armstrong told mission control as they touched down.

Although all three astronauts were spaceflight veterans of Project Gemini, none knew what to expect when Armstrong and Aldrin stepped out into another world. Pictures from Apollo 8 and Apollo 10 had given them an excellent idea of what the ground would look like as they traveled past it toward their landing site: they spied rocks of all sizes, including a boulder field, and numerous impact craters—some small, some as large as 80 feet across. But setting foot on the moon was a different proposition altogether. Immediately after touchdown, they went through many sequences that would enable them to abort or liftoff if the moon proved inhospitable. In the event something went wrong, they would still have to spend two hours on the surface waiting for Collins and the Columbia to return from the dark side of the moon. But they were ready to ascend quickly if necessary.

Instead, everything checked out so they prepared to leave the LM. In a post-flight press conference at the Manned Spacecraft Center (MSC, later Johnson Space Center), Armstrong said, “A number of experts had, prior to the flight, predicted that a good bit of difficulty might be encountered by people attempting to work on the surface of the moon due to the variety of strange atmospheric and gravitational characteristics that would be encountered. This didn’t prove to be the case and after landing we felt very comfortable in the lunar gravity. It was, in fact, in our view preferable both to weightlessness and to the Earth’s gravity.”

Aldrin agreed: “We did find that mobility on the surface was in general a good bit better than perhaps we had anticipated,” although he noted that the process of walking was altered by the reduced force of gravity, which meant they had to plan their movements three to four steps in advance instead of one or two, as on Earth.

Armstrong added, “We had very little trouble, much less trouble than expected on the surface. It was a pleasant operation. Temperatures weren’t high. They were very comfortable. The little [extravehicular mobility unit (EMU)]—the combination of spacesuit and backpack that provided or sustained our life on the surface—operated magnificently. We had no cause for concern at any time with the operation of that equipment. The primary difficulty that we observed was that there was just far too little time to do the variety of things that we would have liked to have done.”

After checkout, they began to focus on some of their other objectives, including setting up a television camera to share their experience with people back on Earth. Once that was achieved, Armstrong stepped onto the lunar surface and uttered his famous words: “That’s one small step for man, one giant leap for mankind.” Aldrin, following 20 minutes later, described the scene before him as “Magnificent desolation.”

The crew then spent about two and a half hours exploring the Sea of Tranquility, collecting lunar rock samples, taking motion and still photos, and conducting experiments. They ultimately compiled more than 47 pounds of lunar surface material to bring back to Earth. Testing later revealed that the most common kind of rock in the lunar “sea” was basaltic lava. A different type, soil breccias—a result of the impacts that had formed the craters pitting the landscape—were a surprise to scientists.

Following their extravehicular activities (EVAs), Armstrong and Aldrin spent a cold night in the Eagle before it was time to return to the Columbia. This was another test of critical technology: some worried that the LM ascent engine wouldn’t fire, stranding Armstrong and Aldrin on the moon.

“We were very pleased to have the engine light up,” Armstrong later said dryly.

Collins, who had been orbiting the moon in the Columbia throughout his crewmembers’ trip, was relieved to see the Eagle leave the lunar surface. “This was a very happy part of the flight for me. I, for the first time, really felt that we were going to carry this thing off at this stage of the game, and it looks like, although we were far from home, we were a lot closer to it than the pure distance might indicate.”

Collins had experienced a degree of isolation his crewmembers never knew: left alone in the Columbia, he was often not only separated from Armstrong and Aldrin, but cut off from communications with ground control as he transited the far side of the moon. He had plenty of time to contemplate the nature and appearance of Earth’s satellite. “The moon changes character as the angle of sunlight striking its surface changes. At very low sun angles close to the terminator at dawn or dusk, it has the harsh, forbidding characteristics which you see in a lot of the photographs. On the other hand, when the sun is more closely overhead, the midday situation, the moon takes on more of a brown color. It becomes almost a rosy looking place: a fairly friendly place, so that from dawn through midday through dusk you run the whole gamut. It starts off very forbidding, becomes friendly, and then becomes forbidding again as the sun disappears.”

Departing less than 24 hours after it had landed on the moon, the Eagle rendezvoused perfectly with the Columbia. The Columbia then turned toward home. “We were sorry to see the moon go, but we were certainly glad to see that Earth return,” said Armstrong.

On July 24, the Columbia splashed down in the Pacific Ocean without incident. The three astronauts were home, but Armstrong’s boot print remained in the moondust as a reminder of the possibilities for human spaceflight beyond low Earth orbit.

Watch a video showing highlights of Armstrong’s and Aldrin’s walk on the moon.

Read a full transcription of the astronauts’ post-flight press conference at MSC on August 12, 1969.