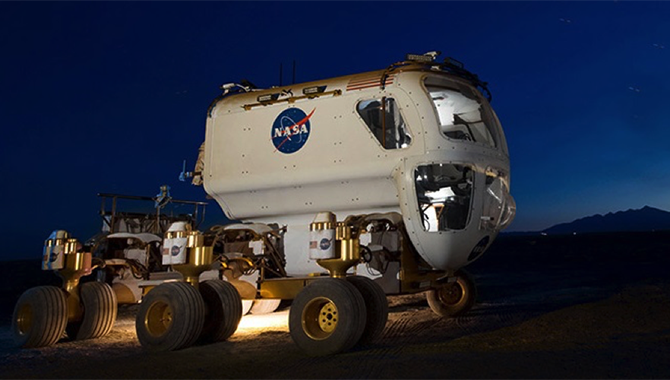 NASA is currently working on a vehicle that will be able to navigate tough terrain with the Multi-Mission Space Exploration Vehicle (MMSEV).

Can the best seller and blockbuster movie The Martian serve as lessons learned that never happened?

Earlier this month, The Martian, a movie directed by Ridley Scott—who also directed both Alien and Thelma and Louise—premiered in theaters nationwide. Based on the best-selling novel by Andy Weir, the film concerns an astronaut who, though stranded on the very inhospitable Red Planet, persists in remaining alive using his knowledge and NASA training, while waiting to be rescued. The story occurs in the 2030s, although much of the science and technology featured are based on what NASA knows today.

With The Martian, NASA has shared knowledge. Andy Weir has used his imagination to project that knowledge and to speculate on a series of possible events, which have not happened. If we considered one of Albert Einstein’s famous quotes, “Imagination is more important than knowledge,” we begin to see the relationship between knowledge (limited to what we capture and share from experience, ours and others) and imagination (limited to what we speculate from experience, ours and others).

By sharing knowledge of what we know about space travel and Mars freely to those who, like Andy Weir, imagined events yet to come (but hopefully will not come as they do in The Martian), we all are writing a case study of what never happened and should be avoided if humanly possible.

Recently at Glenn Research Center, Dr. Denise Bedford, a Georgetown University professor of Knowledge Management, gave a presentation on “Forward Thinking” and asked the audience to reflect on two questions: “1) What does NASA Glenn look like in 2025? 2) How will you grow your intellectual capital resources to achieve that vision?” Bedford added, “Assume you’re going to grow—not throw away—your existing resources.”

Bedford, like Einstein, is stressing the importance of imagining forward to what has not occurred but what can be projected from what we know now and work not to lose. Can we learn from what has been projected—based on knowledge now—into the future? NASA already does this in a sense through modeling. Can we learn from a hypothetical case study like The Martian? As a species, we do learn through storytelling.

During Bedford’s presentation, the audience was encouraged to share their thoughts at several points. One aspect of building a learning culture was particularly stressed by both Bedford and members of the audience. It is important that an agency like NASA, which touches the everyday life of society, rewards “life wide” learning experiences that “bring into the workplace lessons from other aspects of life.”

One of the reasons that The Martian has been both a best-selling book and box office gold is that the astronauts take their humanity into the unforgiving vacuum of space. Humility and humor cannot be taught, but they can be learned, and they are most likely learned long before one signs up at NASA. “I guess you could call it a ‘failure’,” says the Mars marooned astronaut, “but I prefer the term ‘learning experience’.”