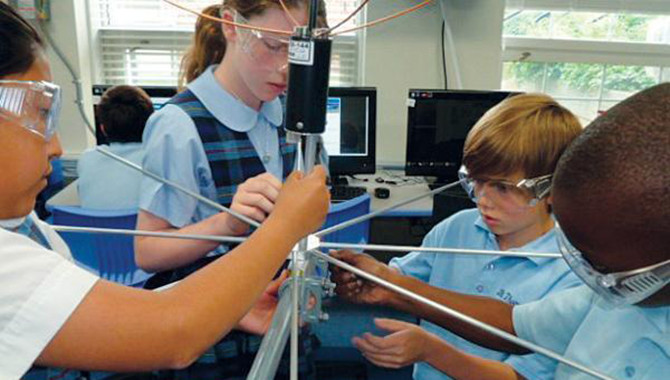 Students from the St. Thomas More Cathedral School work on the antenna that will enable the school to communicate with their satellite, the St. Thomas More Satellite (STMSat)-1. STMSat-1 was designed, built, and tested by elementary school students, and was launched to the ISS as part of NASA’s ELaNa IX program.

“We have over 3500 kilograms of cargo that we’re taking up on this mission, over a third of which is for utilization in experiments. And of course that’s the main mission of the ISS,” said Frank Culbertson, President of Orbital ATK’s Space Systems Group.

“The space station is an unprecedented National Laboratory, and as such it offers access to the low Earth environment and special characteristics there, like microgravity,” said Dr. Kirt Costello, Deputy Chief Scientist for the ISS Program Science Office at Johnson Space Center (JSC). “[W]hen we take gravity out of the equation, we expose other forces and changes and behaviors that we don’t get to see in a one-G field on Earth. It becomes more evident what those changes can be and how they might affect us: our lives here on Earth and our exploration goals as we move farther out into space.”

The ISS was designated a National Laboratory in 2005 and now serves as a unique microgravity platform for a diverse range of investigators and organizations. NASA and its international partners continue to rely on the ISS for their research, while the Center for the Advancement of Science in Space (CASIS) facilitates the use of the orbiting laboratory for other initiatives.

“A broad cross section of users of the National [Laboratory] include private sector industry and commercial uses, spanning all sorts of applications. We’ve got other government agencies that are utilizing the National Laboratory, students and teacher in STEM programs, and of course traditional and institutional researchers. [There’s a] very broad spectrum of research that we’re sponsoring on station. Includes really every science topic that you can think of, every science discipline that there is, both fundamental and applied. We utilize the internal and external capability of space station,” said Ken Shields, Director of Operations and Outreach for CASIS.

The launch represented the first voyage of Orbital ATK’s enhanced Cygnus spacecraft, which has a greater payload capacity, new solar arrays, and new fuel tanks. On December 9, the Cygnus was berthed to the Unity module’s Earth-facing port, the first cargo ship to do so. Its cargo includes many different science and research materials, including three CubeSats that are part of NASA’s Educational Launch of Nanosatellite (ELaNa) IX program. These small satellites were selected through the CubeSat Launch Initiative (CSLI) and represent work from two universities and an elementary school.

“STM is poised to become the first elementary school in the world to have built, tested, and launched a satellite,” said Eleanor McCormack, principal of the school. The school spent several years constructing the curriculum that would support the project, and then three years working with students across all grades to design, develop, and test the technology.

“We wanted the students to be able to see that things that are worthwhile sometimes take a long time, and it takes many people to be involved. We did have failure to some degree with our antenna,” she said. “We never could get it to the point where it was approved by NASA so we went to a different method. So the children have known some failures along the way, but we simply look at them as opportunities for growth.”

In addition to STMSat-1, two other ELaNa IX CubeSats were sent to the ISS on the Cygnus: CubeSat Atmospheric Density Response to Extreme driving (CADRE), from the University of Michigan at Ann Arbor, and Miniature X-Ray Solar Spectrometer (MinXSS), from the University of Colorado Boulder. All three CubeSats will be deployed from the ISS by the NanoRacks CubeSat Deployer (NRCSD) system and released into an orbit similar to that of the ISS. Thirty minutes after deployment, computers on each CubeSat will begin to transmit to their respective ground stations.

The Orbital ATK Cygnus transported other CubeSat payloads as well, including a technology-demonstration mission from NASA’s Small Spacecraft Technology Program (SSTP), part of the Space Technology Mission Directorate (STMD), and a “satlet” initiative from NovaWurks.

The purpose of the Nodes CubeSat from the SSTP “is to test out the potential for using multiple small low-cost satellites to perform complex science missions,” said Andrew Petro, who oversees the SSTP. “Each satellite has an instrument, provided by Montana State University, located inside. They’ll each be taking measurements simultaneously, sharing that data among them, and then either one of the two satellites can be the relay for all of that information back to the ground. This concept could be extended to very large collections of satellites in orbit, allowing us to do missions with a large number of satellites but only needing to communicate with one at a time.”

The NovaWurks project is designed to bring CubeSats down to their most basic element—a small “satlet”—in a format that allows satlets to be attached to each other, offering the potential for customization of larger satellites of any size that can be constructed on orbit.

“[Satlets are] designed to be configured and aggregated as reliable and flexible satellites that can do a variety of missions. An initial set of high sat-based experimental missions are underway, and others are planned for the near future. The first of these is called SIMPL: the Satlet Initial-Mission Proofs and Lessons,” said Talbot Jaeger, Chief Technology Officer at NovaWurks and Principal Investigator for SIMPL. “SIMPL consists of eight fundamental pieces: six high sat cells—cellular pieces of the puzzle—and two solar arrays that also assemble with it. The entire satellite will be assembled on board the ISS, and then be deployed as a fully operational, newly built spacecraft. It will be another first for the space industry.”

CubeSats are of particular interest because they serve as low-cost platforms for a variety of NASA missions as well as an inexpensive way of engaging students in all phases of satellite design, development, and operation. They are affordable for several reasons. “One has to do with the fact that you have a standard size and shape, and that allows you to package these to ride along with other payloads in a way that’s simpler and therefore less expensive because it doesn’t take a lot of unique engineering work,” said Petro. In addition, some CubeSats utilize off-the-shelf smart phones for their computers, further containing cost. “Now we’re able to do complex science missions using that type of technology,” he added.

The Orbital ATK Cygnus is carrying additional science to the ISS, including investigations into packed bed reactors and flame-retardant textiles, as well as material for NASA’s One-Year Mission.

“A lot of the human research going on right now is related to our Year in Space, which is Commander Scott Kelly’s year-long increment in our first U.S. data point on what happens to the human body with these mechanisms that change in microgravity. Do they continue to deteriorate or do they stabilize over time? That’s going to help our human research program really understand where we still have risks that we need to address for future exploration,” said Costello.

Findings from the One-Year Mission will inform NASA’s journey to Mars. Other experiments being flown to the ISS on the Cygnus are designed to support life on Earth or future deep space missions.

Watch a video about the Packed Bed Reactor experiment that was launched to the ISS.

Learn more about the diverse applications of the ISS orbiting laboratory in this APPEL News article.

Read an APPEL News interview with Nancy Rabel Hall, who manages science projects that fly on the ISS.

View a video about the role of CASIS on the ISS National Laboratory.