Back to Top
Home/APPEL News/APPEL News Digest/This Month in NASA History: A Flying Bathtub Set the Stage for Shuttle 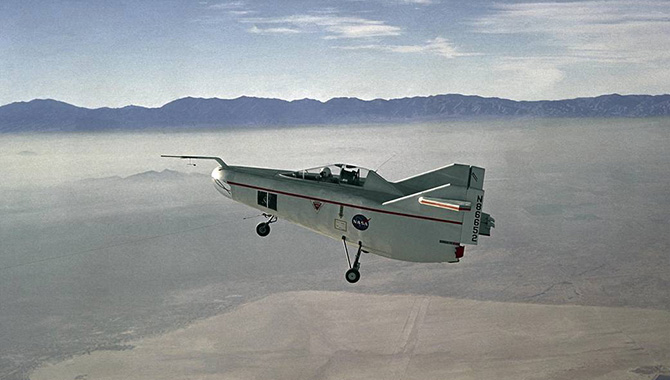 Fifty years ago this month, NASA launched the “flying bathtub” for a final time. Its legacy lived on for decades through the Space Shuttle Program.

The M2-F1, the first aircraft in the NASA-Air Force lifting body program, started life as a 24-inch model that was air-launched from a radio-controlled plane. That model was created by R. Dale Reed, an engineer from NASA’s Flight Research Center (FRC, now Armstrong Flight Research Center (AFRC)). Reed believed that the lifting body design—which got its name because its lift was generated from the fuselage rather than from wings—could provide the solution to the question of how to develop a crew-rated spacecraft capable of landing safely without an air-breathing engine.

Reed shared home movies of his lifting body model with FRC director Paul Bikle in 1962. Until then, few believed the design had merit for manned spaceflight. While the lifting body format had been considered at the start of NASA’s human spaceflight program, the agency went with a capsule design instead. The problem with the wingless lifting body was simple: it lacked stability at subsonic speeds. Above the speed of sound, the design performed superbly. But at low speeds, including those associated with final descent and landing, the lifting bodies were challenging to control. Nonetheless, Reed’s model and home movies suggested the design warranted further investigation, and so Bikle approved the development of a full-scale, unpowered M2-F1. 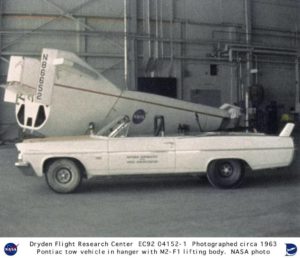 The aircraft was built on a shoe-string budget of $30,000, in part because many of the engineers and technicians working on it donated their time. The construction took place in a section of the FRC’s main hangar nicknamed “Wright’s Bicycle Shop” and was a joint effort by the FRC and a local glider manufacturer, Briegleb Glider Company. Gus Briegleb himself led the charge to handcraft the mahogany shell, which consisted of hundreds of tiny wooden parts that were nailed and glued together. The interior frame of tubular steel was built by NASA craftsmen and engineers. In addition to the steel frame and plywood skin, the M2-F1 featured aluminum tail surfaces, push-rod controls, and the landing gear from a Cessna 150 (which was later upgraded to gear from a Cessna 180). In the second phase of the project, a pilot ejection seat was added along with a small landing rocket that could provide extra thrust before touch down, if needed. The resulting glider was a celebration of craftsmanship—and a veritable eyesore. Wingless, squat, and tubby, it quickly became known as the “flying bathtub.”

Because it was a glider, the flying bathtub had to be towed behind a powered vehicle to achieve flight. The project started by using ground tows. Retired Air Force maintenance officer Walter “Whitey” Whiteside, a serious hot rod enthusiast, purchased and oversaw enhancements to a brand-new 1963 Pontiac Catalina convertible. The Catalina was selected for its power: with a 421 cubic-inch tri-power engine, the largest available, and a four-barrel carburetor, the convertible had the force to tow the 1,000-pound M2-F1 and enable pilots to get the glider off the ground. NASA test pilot Milton O. Thompson was the first to fly the M2-F1, and he went on to pilot it 46 more times. Over the course of the project, nine other pilots sat at the gilder’s helm, including Chuck Yeager, Bill Dana, Joe Engle, and Bruce Peterson (who was designated project pilot after Thompson),

To deliver the needed performance, the Catalina was modified at two separate racing shops until it could reach 110 to 120 miles per hour with the M2-F1 at the end of a 1,000-foot tether. Many aspects of the car were enhanced. The rear tires were replaced with smooth racing tires so that they wouldn’t smoke at high speeds. Roll bars were added for the safety of the driver and two ride-along observers. The seats were rearranged so one observer could face backwards to watch the M2-F1 while the other faced sideways in the back, keeping a close eye on instruments such as radios and intercoms. The car’s hood and trunk were painted yellow to fit in with the rest of the FRC’s fleet of working vehicles.

The first attempt to tow the flying bathtub behind NASA’s hot rod took place on March 1, 1963. The M2-F1 never got off the ground. It took several more attempts—and a new flight control system—before the glider became airborne, momentarily, above the surface of Rogers Dry Lake. Over the subsequent weeks, several pilots, including Thompson, coaxed the M2-F1 up to a peak altitude of 20 feet so the tow could be released and the aircraft could fly briefly. Then the M2-F1 was moved to Ames Research Center (ARC) for wind tunnel testing to learn more about its flight qualities before launching it behind a Douglas C-47/R4D tow plane.

On August 16, 1963, the M2-F1 flew freely for the first time. Thompson was again in the cockpit. At 12,000 feet, the tow was released and the flying bathtub began descending at roughly 3,600 feet per minute over Rogers Dry Lake. At 1,000 feet, Thompson lowered the nose to increase the speed to 150 miles per hour before landing smoothly without an engine.

Over the next three years, this process was repeated again and again until the project completed more than 400 ground tows and over 100 air tows. At that point, FRC management agreed: the flying bathtub had proven the lifting body concept.

The M2-F1 was followed by five additional lifting body designs before the program ended in 1975. The M2-F2 and HL-10 were next. Unlike the flying bathtub, each was powered by full-thrust rocket engines to enable high-speed flight tests. The M2-F2 was eventually modified and rebuilt as the M2-F3. The Air Force commissioned the fifth lifting body, the potato-shaped X-24A, but it still lacked the stability needed for a runway landing. That changed with the final plane in the program: the X-24B. It introduced a completely new design to the lifting body program which, in conjunction with its double-delta wing shape, provided twice as many lifting surfaces as the X-24A. At last, a lifting body offered the stability needed to land precisely at low speeds without power.

Together, the six lifting bodies established that a wingless spacecraft could reenter Earth’s atmosphere to land safely and accurately without an air-breathing engine. These findings were crucial to the design of the space shuttle: they confirmed that the orbiter did not need to support the extra weight—or cost—of jet engines and fuel in order to remain stable enough to land on a runway. This revolutionized the country’s human spaceflight program.

The M2-F1 was retired after its final flight on August 16, 1966, exactly three years after its first free flight behind the tow plane. The flying bathtub is now on exhibit at the Air Force Flight Test Museum at Edwards Air Force Base in California.

Watch a video of the M2-F1 being towed behind NASA’s Pontiac convertible.

Read an APPEL News article about the X-24, the final vehicle in the lifting body program.