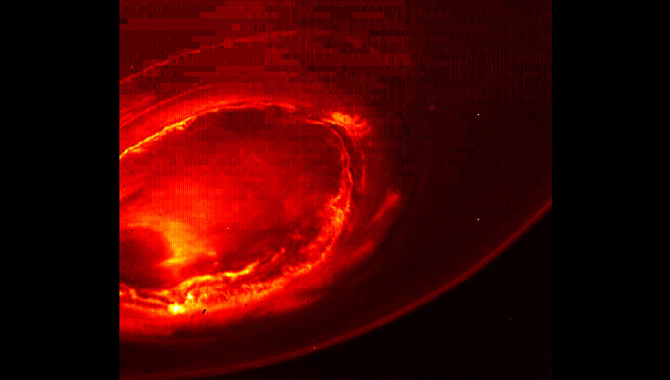 The Jovian Infrared Auroral Mapper (JIRAM) camera, one of the instruments on the Juno spacecraft, captured this novel view of Jupiter’s southern aurora during the mission’s first flyby of the gas giant on August 27, 2016.

Juno entered Jupiter’s orbit on July 4, 2016, with the goal of uncovering the gas giant’s secrets to help scientists learn more about the evolution of the planet and of our solar system. The first Jupiter flyby, perijove 1, occurred on August 27. Although the instruments were powered on, the maneuver was not actually part of the science mission: the team intended to test and calibrate the instruments to determine how they operated in close proximity to Jupiter. Nonetheless, data from that first pass have already revealed unexpected information about the planet.

“Each data set is remarkably unique and discovery-like. We are seeing things that we didn’t expect across the board. The magnetic field, the aurora, the gravity field: every one of them has provided outstanding new scientific results. But this all came somewhat serendipitously because this was really a calibration flyby,” said Scott Bolton, Juno principal investigator (PI) from the Southwest Research Institute (SwRI) in San Antonio, TX. “So there’s a lot more to come.”

The team intended to precede the second Jupiter flyby, perijove 2, with a period reduction maneuver (PRM): a main engine burn designed to reduce the spacecraft’s orbital period from 53 days to 14. This would increase the frequency of Jupiter flybys, allowing the science team to collect data more rapidly. But as they were pressurizing the system in preparation for the burn, the team noticed a delay in valve response and postponed the event.

“[E]verything’s okay and we retain the ability to do that rocket firing sometime in the future,” said Bolton. “We can stay in the 53-day orbit and every subsystem can survive that. The extra time doesn’t cause a problem. The [level of] radiation [exposure] also doesn’t change because the radiation that Juno gets is only around the closest approach.”

Juno will be able to collect essentially the same science in a 53-day orbit as it would in the planned 14-day orbit. The only significant issue lies several years ahead: if the spacecraft is still in the 53-day orbit by mid-2019, it will end up in Jupiter’s shadow for an eclipse of roughly six hours. As the first solar-powered spacecraft to operate around an outer planet, this lack of sunlight could be a concern.

“[I]f we were never going to change out of the 53-day orbit, we would have to go investigate how do you get past an eclipse. We know we can tolerate some [time without exposure to sunlight], but we haven’t really looked at that particular length and duration,” said Bolton. If they remain in the current orbit, the mission will be able to conduct 20 flybys before mid-2019.

When the PRM was initially postponed, the team proposed turning perijove 2 into a science pass: they would turn on the science instruments and collect data as they flew past Jupiter. This plan had to be abandoned late on October 18 when the spacecraft unexpectedly went into safe mode less than a day before its second Jupiter approach. While it is not yet clear what caused the event, the spacecraft apparently detected an unexpected condition, turned off all unnecessary subsystems—which included the science instruments—and then pointed at the sun to link up communications with Earth. The team is now working to analyze the data and determine what occurred.

In the meantime, they continue to work with the unexpectedly fruitful science findings from perijove 1. Key information came out of the mission’s microwave radiometer (MWR), a collection of six different microwave radiometers, each of which measures a distinct wavelength. The largest antenna is capable of peering 350 to 400 kilometers below Jupiter’s cloud cover.

“This instrument was basically invented for Juno,” said Bolton. “And its primary objective is to look at Jupiter’s atmosphere and see beneath the clouds. It’s helping us see the invisible.”

Images based on data from the MWR show that the zones and belts visible on Jupiter’s surface penetrate far into the planet’s deeper layers. “That came as a surprise to many of the scientists,” said Bolton. “The other thing that was surprising and very interesting about this is that while the zones and belts appear to exist deep down, they’re evolving. They’re not staying the same, they’re changing as we go down.”

In addition to the MWR, the JunoCam—a visible light camera primarily utilized for public outreach—captured unexpected images at Jupiter’s poles, which appear to be rife with cyclonic activity. One of the cyclones spanned roughly 7,000 kilometers. “So this storm is more than half the size of the earth and its elevation, based on our estimation of this in looking at the shadow and the rest of the geometry, is that it’s vertically towering up about 85 kilometers or more,” said Bolton. “It is a truly towering beast of a storm. Probably the biggest thing we’ve ever seen.”

JunoCam was included in the science payload as a means of interacting with the public. “We have developed four ways for the public to engage with us in a participatory way, not a passive way,” said Candy Hansen, JunoCam imaging scientist at the Planetary Science Institute in Tuscon, AZ. On a dedicated website, the public can take part in planning, discussion, voting on which images the JunoCam should capture during the flybys, and downloading images.

“Anybody can download those images and they can do anything they want with them,” said Hansen. “We also have people jumping in to help us with the science analysis.” Members of the public are assisting the team by correlating JunoCam observations with what has been observed on Jupiter over time using Earth-based telescopes. “That allows us to connect what we’re seeing from our very different perspective to the historical record of the dynamics of Jupiter’s atmosphere.”

The next Jupiter flyby is expected to take place on December 11, 2016. In the meantime, the Juno team will continue to analyze data to determine why the spacecraft went into safe mode. They will also examine the valves in the propulsion system to assess the feasibility of conducting a PRM in the future in order to shorten the mission’s orbital period to 14 days.

“We’re in no rush to make any of these changes,” said Bolton. “Fortunately, the way we designed Juno and the orbit that we went into was very flexible. It allows very flexible science.”

Juno launched on August 5, 2011, from Cape Canaveral, FL. It is the second of NASA’s New Frontiers missions, which include New Horizons—responsible for the first-ever flyby of Pluto, in 2015—and the Origins, Spectral Interpretation, Resource Identification, Security-Regolith Explorer (OSIRIS-REx), which will visit the near-Earth asteroid Bennu. Juno is managed by the Jet Propulsion Laboratory (JPL). The spacecraft was built by Lockheed Martin Space Systems as part of NASA’s New Frontiers Program, which is managed at Marshall Space Flight Center (MSFC).

Find out more about Juno’s mission in this APPEL News article.