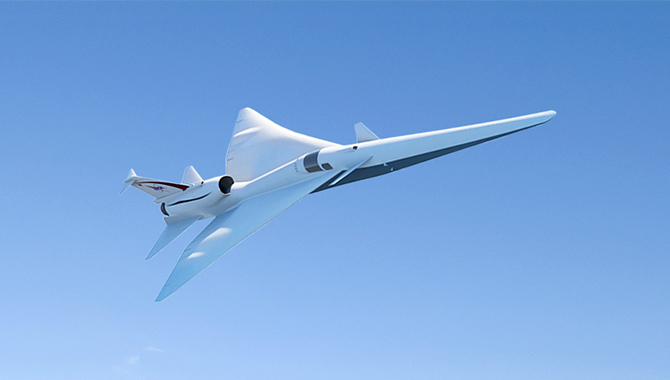 The LBFD represents the first NASA X-plane of the 21stcentury. Its mission is split into two parts. The first focuses on design and build, with the development of a new, piloted X-plane capable of flying at supersonic speeds. It will showcase technology to reduce the volume of the supersonic boom, transforming it into a gentle thump.

The second part of the mission is committed to data capture. The X-plane will fly over diverse communities—ranging from urban to rural—across the U.S. in order to gather data on ground-based human responses to the low-boom flights. That data will be shared with U.S. and international regulators to encourage the introduction of new sound-based rules governing overland supersonic flight. Ultimately, it is hoped this will pave the way for faster commercial passenger and cargo air travel around the world.

“We’ll fly this X-plane at supersonic speeds over land—but quietly,” said Jaiwon Shin, associate administrator for NASA’s Aeronautics Research Mission Directorate (ARMD), speaking at a briefing to announce the contract award for the LBFD. “We’ll fly it over select U.S. cities and ask the people living and working in those communities to tell us what they heard, if anything. We will provide the scientifically collected human response data to the FAA and International Civil Aviation Organization, or ICAO, so that they can use the data to change the current rule that completely bans civil supersonic flights over land. When the rule is changed, the door will open to an aviation industry ready to enter a new supersonic market in our country and around the world. This X-plane is a critical step closer to that exciting future.”

The 94-foot aircraft will fly at an elevation of 55,000 feet while going 1.4 times the speed of sound. While the shape of the X-plane is revolutionary, the rest of the build is intended to maximize cost efficiencies by using off-the-shelf materials.

“[O]ne of the guiding principles that we had in designing this airplane was to make it as affordable as possible,” said Peter Iosifidis, LBFD program manager at Lockheed Martin, which was awarded the $247.5 million contract to build the X-plane. “The only thing that is new is the shape. The canopy is off a back seat of a T-38, the landing gear is from an F-16, and the engine is a General Electric 414-400. A lot of the subsystems have come off either F-16 or F-18 aircraft. There’s really no new development of any major components as part of this effort.”

The new aircraft is not intended to be a prototype for a commercial supersonic plane. Instead, like earlier NASA X-planes such as the Bell X-1 and the North American X-15, it will be an experimental research craft designed to collect critical data. The plan is to begin building the plane immediately based on a preliminary design established in 2017. The initial flight of the LBFD is planned for 2021.

“After the first flight, there will be a flight clearance phase where we’ll prove that the airplane’s safe to fly and that it meets the mission performance. Following that phase, there will be what we call the acoustic validation phase, where we’ll find out: does the aircraft do the quiet supersonic signature that we expect,” said Peter Coen, project manager for NASA’s Integrated Aviation Systems Program. “That’s expected to last through about September of 2022. And immediately following that, we will conduct our first community response test.” He added, “That test will be flown from NASA Armstrong but will take place in a community in the southwestern U.S. that’s not normally exposed to sonic booms.”

The team intends to conduct two community response tests per year over three years, for a total of up to six tests over a representative database of cities, towns, and rural areas across the country. Each test area will cover 50 by 50 square miles. That will entail capturing responses from a large number of people, which is exactly the kind of comprehensive coverage the team needs to obtain extensive, relevant data for authorities.

Although construction has not yet begun on the X-plane, NASA has already been laying the groundwork for the critical community response testing phase. “We’ve done tests at NASA Armstrong using an F-18 and a unique dive maneuver that creates something that sounds like a low-boom sound to start to test how you do surveys, how you measure the noise, how you record the information. We’re planning a risk reduction test in the near future over a larger community, again using that F-18 dive maneuver but with people who are not experienced with the sound,” said Coen.

Awarding the contract for the LBFD and beginning work on the build represents the culmination of extensive work performed across the agency. “Years of NASA research, from all four aeronautic centers, have brought us to this day. Exploring the science of sonic booms, flying modified aircraft to test methods for quieting the sonic boom, trying out new ideas in wind tunnels, taking advantage of new concepts in computational simulations,” said former NASA Acting Administrator Robert Lightfoot. “This low boom supersonic demonstration mission—the X-plane and the community flights to come—is truly a game changer.”

Learn more about the Low-Boom Flight Demonstrator in this video.

Hear it for yourself: watch a video illustrating the difference in sound between a sonic “boom” produced by today’s airplanes and the gentle “thump” that will be created by the LBFD.

Read an article about the X-15, one of NASA’s 20th-century X-planes.