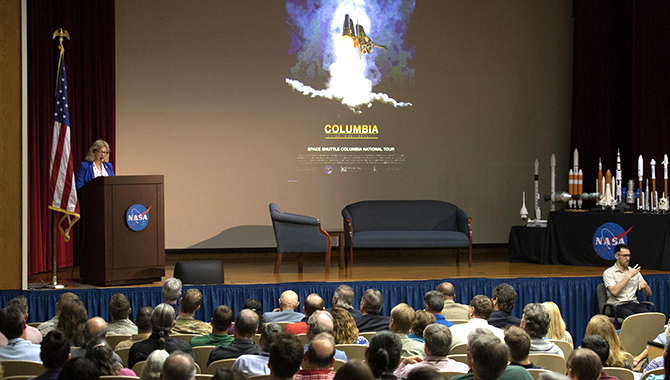 The Space Shuttle Columbia holds a unique place in NASA history, marking one of the highest achievements, as the first reusable spacecraft launched by NASA, and one of the darkest hours when it broke apart during reentry on February 1, 2003.

The lessons learned from the investigation into the Columbia disaster transformed NASA. The agency moved quickly and resolutely to address cultural issues in the decision-making process identified in the Columbia Accident Investigation Board’s final report.

On April 12, 2019, the 38th anniversary of its first launch, Space Shuttle Columbia began a new mission—one of education for NASA’s technical workforce. The Space Shuttle Columbia National Tour, which eventually will stop at all of NASA’s centers, began at the Kennedy Space Center. The tour included a display of artifacts from Columbia, a session of APPEL Knowledge Services’ Complex Decision Making and Project Management (CDMPM) Course, and a townhall meeting. The goal of the tour is to ensure that a new generation of NASA’s technical workforce understands the lessons learned from the Columbia. 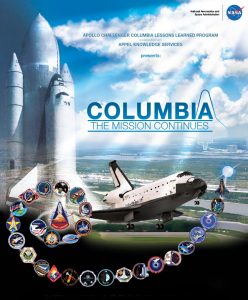 In opening remarks at the townhall, Kelvin Manning, Associate Director, Technical at KSC, recalled becoming emotional while escorting VIPs to the memorial service less than one week after the accident. Returning to the runway where Columbia was to have landed, knowing that Columbia and her crew never made it back home was a traumatic experience. Manning recalled a guest telling him to “get yourself together.”

“I looked at him and said, ‘Sir, you don’t understand.’ I knew what it meant to be a member of the NASA family. When we lost Columbia and her crew, it was one of the lowest moments in my life. So, today, on the 38th anniversary of the maiden voyage of Columbia, STS-1, as a NASA family, we are returning Columbia back to flight on a new mission to inspire, educate and powerfully share the valuable lessons learned from the past, to help bring us successfully into the future.”

Edward Rogers, Chief Knowledge Officer at Goddard Space Flight Center, gave a presentation about the hard lessons learned from the Columbia investigation and how they apply to all NASA programs and projects.

Rogers walked the overflow crowd in the KSC Training Auditorium through video of the Columbia launch, in which a large piece of foam comes off the external tank and strikes the orbiter’s wing. This was the only evidence available of the strike. The impact site is not visible. This left a great deal of uncertainty about what that impact might have done to the shuttle’s wing.

“Along the way, management concluded that nothing could be done. Our leaders relied on expert opinion that believed foam couldn’t hurt the orbiter. Then, when a debris assessment team comes in, requests imagery to deal with uncertainty that remained in the equation, there was no need seen for getting such imagery.”

Rogers noted that humans have a natural tendency to let an expert opinion anchor their thinking, especially if that expert opinion validates a desired outcome. “Foam can’t hurt the RCC. This was called common engineering opinion. It was common. It was an opinion. There wasn’t much engineering involved in it, other than an engineer happened to say it,” Rogers said.

“Sometimes, not knowing something and saying we don’t know something can be the most valuable statement we make, because it retains our uncertainty in front of us. It doesn’t make us feel better about it. And uncertainty drives us to think harder and dig deeper, which we’re actually really good at,” Rogers said.

Rob Grant, Manager of KSC’s Office of Diversity & Equal Opportunity, discussed how the Columbia investigation affirmed the importance of diversity and inclusion in the decision-making process. “Competent inclusive practices strive to give everyone the opportunity to be heard. That reduces the fear of reprisal for speaking up and provides the environment where someone can speak truth to power so that management has the full input of everyone on the team.” 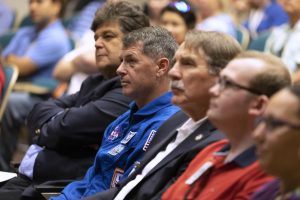 The townhall included several moving videos about Columbia and the crew of STS-107, including one developed by the APPEL KS communications team, working with Michael Ciannilli, Program Manager of the Apollo Challenger Columbia Lessons Learned Program, who developed the town hall program and served as host. The emotional keynote address was delivered by Evelyn Husband Thompson, the widow of STS-107 Commander Rick Husband.

John Zarrella moderated a panel with Former Shuttle Flight Directors Bob Sieck and Mike Leinbach in which they discussed the job responsibilities of a flight director and the challenges of recovery from disaster.

“My job [was] to keep that thing on the ground until everybody was convinced it was go,” Leinbach said. “I would stand up, if I had time, and look out the window and think about my seven friends on top of that thing. Am I ready to commit them to the most dangerous thing they’ve ever done? That’s how I made my personal final go/no go—assuming everything else was good. Can I look at their families afterword and tell them that we did the best we could? That’s how I made my decision.”

Sieck said a launch director’s job, “summed up, is to say no when there’s too much launch fever in the system, either from management or people working problems at T minus whatever minutes.”

Recovery following the Columbia disaster was difficult. This was compounded by the recommendation that the shuttle program be terminated following completion of the International Space Station, the components of which had been specifically designed to be taken into space in the cargo hull of the shuttle.

“So, we had to deal with people knowing they were losing their jobs eventually. Had to deal with the emotions of that,” Leinbach recalled, adding that it was beautiful to watch the team pull together, dedicating themselves to the safety of the final flights.

“It’s the people…  not compromising or not letting up at all. Because the last flight had to be just as safe as the one before and the 130 before it. It’s the people knowing we had to do it for the astronauts and the … crew. Nothing less was acceptable.”

The Space Shuttle Columbia National Tour is sponsored by APPEL KS and the Apollo Challenger Columbia Lessons Learned Program. Its next stop will be at the Marshall Space Flight Center later this year.