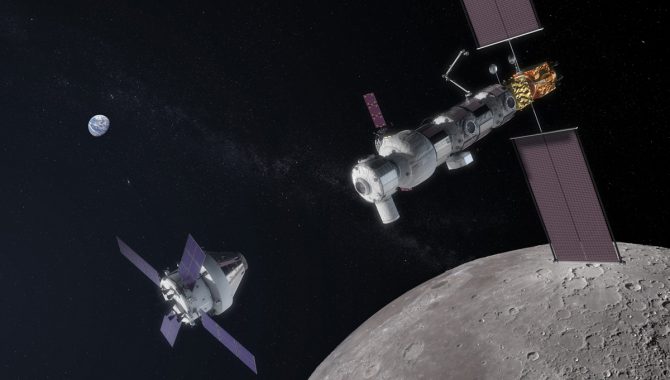 In this artist’s concept, an Orion spacecraft approaches the Gateway, in orbit at the Moon.
Credit: NASA

Gateway, Artemis Base Camp will test technology and capabilities for mission to Mars.

In early April, NASA released a document prepared for the National Space Council, outlining the Agency’s plans for establishing a sustained human presence on the Moon and how that endeavor will develop the technologies and capabilities required for the first human mission to Mars. The plan envisions a progression from robotic missions beginning in 2021, to a human return to the lunar surface, to an eventual base on the Moon that will enable astronauts to spend more than a month on the lunar surface at a time.

Such a stay would be more than double the time all Apollo missions spent on the Moon, combined. NASA has learned much about the Moon since December 13, 1972, when Eugene Cernan spoke eloquently of peace and hope before climbing into the Lunar Module for the final Apollo ascent. The Lunar Reconnaissance Orbiter has created detailed maps of the surface, including likely sites of key resources and water ice in craters at the poles. Scientist are still analyzing and making discoveries from the more than 830 pounds of lunar samples the Apollo astronauts returned.

“Our return to the Moon begins with robots,” the document states, noting that the Commercial Lunar Payload Services (CLPS) initiative is scheduled to begin delivering science missions to the lunar surface in 2021. One of those missions is a rover called VIPER, an acronym for Volatiles Investigating Polar Exploration Rover. VIPER will seek out water ice at the south pole of the Moon to characterize it, drill into it, and ultimately determine how it is embedded in the regolith.

The water ice at the Moon’s poles has the potential to not only support future astronauts during longer lunar stays but could also play a role in the development of rocket fuels at the Moon for future crewed missions to Mars.

NASA has already made significant progress on early elements of the plan. In addition to the CLPS missions that will precede the first crewed Artemis landing on the Moon, the Agency is transitioning low-Earth orbit missions, including resupplying the International Space Station, to commercial partners.

The first Artemis mission will be uncrewed, traveling 280,000 miles from Earth, beyond the Moon, testing the powerful new Space Launch System and Orion spacecraft before returning to Earth about three weeks later. The data obtained from the mission will clear the way for Artemis II, the first crewed mission to the vicinity of the Moon since 1972. “This will be an Apollo 8 moment for a new generation. At the end of this mission, NASA intends to have tested every hardware, software, and operational component of Artemis III except for the actual landing on the surface,” the report states.

Artemis III is planned to land the first woman and next man on the Moon in 2024.

Unlike the Apollo 11 mission, in which Neil Armstrong and Buzz Aldrin flew over the surface of the Moon looking for a better landing site beyond craters and boulders the size of cars, while being warned they were dangerously low on fuel, the first Artemis astronauts will know much more about their landing site and will find equipment left from earlier CLPS delivery missions to increase their productivity on the lunar surface.

A key component of NASA’s Plan for Sustained Lunar Exploration and Development is the creation of the Lunar Gateway, a multi-purpose structure in orbit at the Moon. The document notes that international partners are already committing to contribute to the Gateway, which will “offer astronauts easier crew returns, a safe haven in the event of an emergency, the ability to navigate to different orbits around the Moon and later, an advancement in human life support systems.” The Gateway will also provide a platform for research into heliophysics, radiation, and space weather that cannot be conducted within the protection of the Earth’s Van Allen radiation belts. 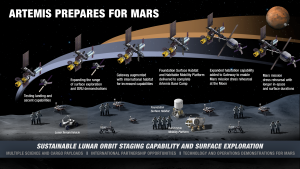 Infographic showing the evolution of lunar activities on the surface and in orbit.
Credit: NASA

The Gateway will be complemented by the development of Artemis Base Camp at the South Pole of the Moon, the first sustainable base for humans on the lunar surface. Creating this base camp will require many of the same infrastructure and systems development procedures as a human mission to Mars, while advancing the commercial space industry and enabling the discovery of new resources on the Moon.

The base camp will include a new generation Lunar Terrain Vehicle, an open vehicle that the astronauts, wearing spacesuits, will drive to expand their range of movement, similar to Apollo’s Lunar Rover. A larger, pressurized Habitable Mobility Platform is envisioned to enable stays of up to 45 days, and a permanent foundation surface habitat will accommodate four astronauts on the lunar surface.

The report also outlines plans for a later expansion of the Gateway with habitation and support systems to allow astronauts to simulate a journey to Mars. “This evolution of the Gateway’s systems to include large-volume deep space habitation would allow our astronauts to test, initially in lunar orbit, how they will live on their voyage to and from Mars. Gateway can also support our first Mars mission analogs on the lunar surface,” the report states.

“The success of the first human mission to Mars requires a voyage of stunning technological and operational complexity,” the report states. “The initial lunar missions will greatly inform our concept of operations for Mars.”

“Artemis and the development of Artemis Base Camp will inspire the world with the ability and commitment of American leadership, and in the positive potential of humanity as a whole. If we are to leave a legacy of greatness, hope, limitless opportunity, and growth to future generations, then it is a mission we cannot afford to postpone,” the report concludes.