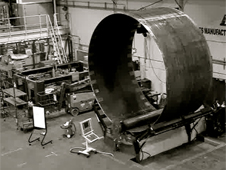 The Problem in Context
Preparing for a fabrication job of this size and scope demanded a wholesale renovation of a facility: new cranes, new assembly platforms, and a new sheet metal roller. This meant retrofitting an older manufacturing shop floor. The team had to be assembled and the modification completed in only 3-4 months, so the project could begin work as scheduled.

The opportunity to build a new launch vehicle that can loft humans into space does not come along often. The Ares family of launch vehicles, conceived in response to the 2004 Vision for Space Exploration, presented the first chance for NASA engineers to get hands-on experience designing and building a human-rated system since the development of the space shuttle three decades earlier.

In 2005, NASA Headquarters solicited proposals from Integrated Product Teams for different segments of the Ares I-X test flight vehicle. The Ares I-X test flight objectives focused on first-stage flight dynamics, controllability, and separation of the first and upper stages. The launch vehicle would consist of a functional booster stage and an upper stage mass simulator, which would have the same mass as an actual upper stage but none of its functionality.

A team at Glenn Research Center prepared to bid for the job of building the Ares I-X Upper Stage Simulator. The potential significance of this assignment could not be overstated. Most of the centers recent space flight project work consisted of developing small (glove box) microgravity experiment payloads for the space shuttle and International Space Station. There had been very few opportunities to develop space flight hardware. Around the same time that the team was developing its proposal, NASA Headquarters conducted a readiness review to determine Glenns ability to manage significant space flight projects.

Shortly thereafter, NASA Administrator Dr. Michael Griffin announced that each field center would contribute to NASAs primary mission of space exploration and discovery. Glenn would have to earn its assignments and its work would be closely supervised, but it would have a chance to revitalize itself.