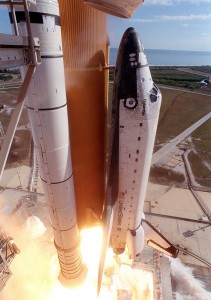 A close-up camera view shows Space Shuttle Columbia as it lifts off from Launch Pad 39A on mission STS-107.
Photo Credit: NASA

The Space Shuttle Columbia thundered skyward at 10:39 AM on January 16, 2003 from Kennedy Space Center. Little more than a minute later, a chunk of insulating foam tore away from the external fuel tank and splintered against Columbia’s left wing. The incident did not disrupt Columbia’s planned path to orbit; indeed, nobody on the ground or in the orbiter even noticed it. It would be another day before routine reviews of launch photos revealed the foam strike.

Engineers were concerned about the apparent momentum of the strike, and the fact that none of the imagery from 12 ground-based camera sites showed a clear image of the impact or potential damage to the Orbiter. While foam debris had been a common occurrence on prior Shuttle missions, no one had ever seen such a large debris strike so late in ascent.

Once the strike was confirmed, engineers and managers from across the Shuttle Program began discussing and assessing its significance in order to determine what, if anything should be done about it.