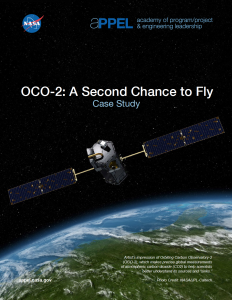 At 1:55 a.m. on February 24, 2009, a Taurus XL rocket rumbled away from the ground at Vandenberg Air Force Base in California carrying the Orbiting Carbon Observatory (OCO). OCO was on its way to orbit—but not for long. The payload fairing failed to separate from the launch vehicle, preventing the final stage from boosting OCO into its injection orbit. The surviving pieces splashed down in the ocean near Antarctica.

OCO, an Earth System Science Pathfinder project run by the Jet Propulsion Laboratory (JPL), was designed to make precise, time-dependent global measurements of atmospheric carbon dioxide to help scientists better understand the sources and “sinks” of the greenhouse gas. This information was considered so critical that, three days after the launch mishap, a proposal for a replacement mission—Orbiting Carbon Observatory-2 (OCO-2)—was sent to NASA Headquarters for review. By early 2010, OCO-2 was a go.

This rare second chance to fly presented the OCO-2 team with unique opportunities and challenges. The first was to actively apply lessons learned and knowledge from OCO in order to meet the new mission’s crisp timeline. The second was an unexpected chance to test out their algorithms and software on a live datastream from another project. Throughout, the OCO-2 team strove to maximize the value of their mission as they pushed to reach the launch pad a second time.