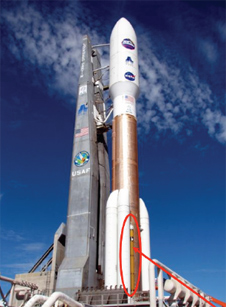 The liquid oxygen feed line on the Atlas V 500 series launch vehicle. Image Credit: NASA
The Problem in Context:
The qualification testing process consists of a formally defined series of evaluations of the functional, environmental, and reliability performance of a component or system. This testing places loads and stresses on hardware in excess of actual flight conditions in order to establish a factor of safety that can account for imperfections in materials or manufacturing as well as uncertainty in load estimates.

In early September 2005, the Launch Services Program at Kennedy Space Center received an unexpected call from Lockheed Martin, the manufacturer of the launch vehicle for New Horizons, NASA’s long-planned mission to Pluto.

The news on the other end of the phone was not good. The launch vehicle’s fuel tank had experienced a catastrophic failure during the final stages of qualification testing. With just over four months until the planned launch date, work began immediately to determine the cause of the failure and the implications for the mission.

New Horizons, the first-ever mission to Pluto, posed a number of technical challenges simply due to the sheer difficulty of reaching its destination. Slated to launch on January 11, 2006, it had a 17-day launch window (the period during which it could be launched) in the winter of 2006 that would put it on the shortest trajectory, allowing it to reach Pluto in 2015. Delays beyond that window could push back the arrival at Pluto by years.

The New Horizons RP-1 tank problem ultimately presented a test case of NASA’s revised governance model for its new leadership team. Virtually the entire senior management of the agency had turned over since the loss of the space shuttle Columbia two and a half years earlier. The new team faced its first case regarding a technical matter that required a decision at the highest levels.