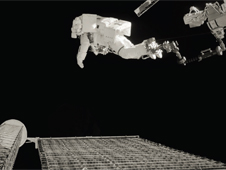 The SSCS is a two-way data communication system designed to provide voice and telemetry among the Space Shuttle orbiter, the International Space Station, and the Extra Vehicular Activity Mobility Unit (EMU). An EMU is a space suit worn by an astronaut during a space walk. Image Credit: NASA

When Johnson Space Center’s Matt Lemke showed up for work as the project manager of the Space-to-Space Communications System (SSCS) at the end of 1994, he discovered that the project he had inherited was not the one he expected. On his second day on the job, Lemke, an experienced avionic engineer but newly assigned project manager, attended a kickoff meeting with Litton Industries, who had recently been selected as the project’s prime contractor. Lemke had read the contract beforehand and understood the terms of the agreement. He planned to hand the Litton team a set of engineering drawings that had been developed before his arrival so they could get started. After handshakes and introductions, he turned to his NASA colleague who had supported the contract agreement with Litton just weeks before, and asked for the drawings. The response stunned Lemke: “What drawings?”

The SSCS is a two-way communications system that was designed to provide voice and telemetry data between the space shuttle orbiter, the International Space Station, and the Extra Vehicular Activity Mobility Unit (EMU). This system enabled simultaneous communication among up to five users.

The formal start of the SSCS project coincided closely with a reorganization within the Engineering Directorate at Johnson Space Center. The Tracking and Communications Division and the Flight Data Systems Division merged into a new Avionic Systems Division. At the same time, a new Project Management Office was created to manage the engineering project teams that in the past had interacted directly with the Space shuttle or Space Station programs. Both administrative changes led to mixed morale, and several key engineers with radio expertise opted not to work for the Project Management Office, which now had oversight over the SSCS project.

At about the same time, the Engineering Directorate awarded a new engineering support contract to Lockheed. While Lockheed was also the previous support contractor, the new contract had a number of provisions that drove off many engineers. All of the contractor designers on SSCS left the project in the six months prior to Litton being awarded the manufacturing contract.

In short, Matt Lemke found himself at the beginning of his first significant NASA project management assignment under a new internal organization, with no engineering drawings, none of the designers who had worked on the earlier phase of the development, and a project team with no expertise in the SSCS complex radio system architecture.