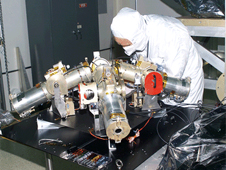 The TIMED spacecraft was assembled during a process known as integration, which typically begins when the wiring harness and the primary structure, or frame of a spacecraft, are assembled. Like the frame of a house, the spacecraft’s frame, or structure, is what the instruments, solar panels, and other parts within the spacecraft are attached to. Image Credit: NASA

The TIMED mission was originally conceived around 1990 as a very ambitious multi-spacecraft mission. It eventually was launched on December 7, 2001 as a more modest but very capable mission using a single spacecraft. The program was caught in all the dramatic changes that NASA went through in this time period. At one point it came close to termination. The development can be characterized in three distinct phases.

It started in 1990 as a Goddard space Flight Center (GSFC) study mission. Under the direction of a new Administrator in 1992, there was a significant push to reduce mission size and cost while still maintaining a multi-spacecraft mission. The cost targets were a fraction of the original estimates. Eventually the GSFC Director decided the constraints and requirements were not compatible and the mission was not appropriate for GSFC. Thus in 1993 GSFC backed out and the Headquarters program office was without a TIMED developer. There are a number of program lessons that can be drawn from this phase including the need to recognize ground rule changes and react to them in a timely manner.

NASA Headquarters then asked the Johns Hopkins University Applied Physics Laboratory (JHU/APL) to study and implement a low-cost mission. On the recommendation of an Ad Hoc Science Panel the mission was now descoped. It included only one spacecraft with four instruments. One lesson learned early in this phase was that a better alignment was necessary between the resources and mission requirements. At this time the Administrator decreed that program management for all programs was to be moved from Headquarters to the Centers. GSFC was awarded program management responsibility, i.e., GSFC was inserted between Headquarters and APL.

The last phase, starting in late 1996, included the development and launch of TIMED under both GSFC and APL. The relationship between the APL Project Office and the GSFC Mission Office was a difficult one. There were many reasons for this, including the legacy of the program changes of the previous years. As a result there are many lessons that can be drawn from this phase including the need for clear lines of authority and reporting in the program. There were also some subsystem process issues within APL that contributed to some post-launch anomalies. These were examined by a Mishap Investigation Board.

Despite the programmatic difficulties early and the post-launch anomalies the mission is working and has met its minimum success criteria. Had the lessons learned in retrospect been recognized earlier, the TIMED development would have been smoother. The purpose of this case study is to help NASA managers, engineers, and scientists understand what happened during the implementation of the TIMED Project, in order to be able to apply the lessons learned in future programs and projects.