Back to Top
Home/Critical Knowledge/Case Studies/APPEL Case Studies/Searching for Life on Mars: Development of the Viking Gas Chromatograph Mass Spectrometer 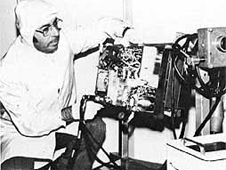 The Viking Gas Chromatograph Mass Spectrometer. A gas chromatograph uses a thin capillary fiber known as a column to separate different types of molecules, based on their chemical properties. Image Credit: NASA

On October 26, 1971, Jim Martin of NASA’s Langley Research Center added a new entry to his “Top Ten Problems” list for the Viking project, the first mission ever to attempt a soft landing on the surface of Mars. Viking had been in development formally for nearly three years when Martin, the project manager, determined that the configuration and schedule of the gas chromatograph-mass spectrometer (GCMS), one of the spacecraft’s key scientific instruments, belonged on the project’s short list of critical problems.

The GCMS was actually two instrumentsa gas chromatograph and a mass spectrometerin one. Conducting gas chromatography and mass spectrometry in the laboratory was hard enough. In the early 1970s, building such an instrument as even a lab model required experts who could keep up with the latest developments in the field, since the science was changing on an almost-daily basis. The GCMS that Dr. Klaus Biemann, the leader of the molecular organic analysis team, had at MIT was the size of a room; its human operator could literally walk through it.

At the time, the GCMS and the other Viking science experiments represented the most technically difficult ones ever attempted by NASA. Shrinking the instrument to a mass of less than 15 kg and a size roughly the equivalent of a hatbox and ensuring that it could operate robotically and survive the rigors of both the journey and the Martian atmosphere presented myriad challenges.