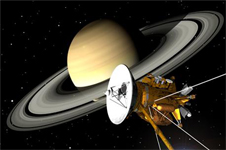 Critical Mission Challenge:
A failure in Cassini’s telemetry system as the spacecraft approached Saturn, after a multi-year journey through deep space, posed a critical problem for the mission management team. Find out how they resolved the issue.

Cassini-Huygens, a partnership among NASA, the European Space Agency, and the Italian Space Agency, was launched October 1997 on a voyage to Saturn that took nearly seven years. The Cassini spacecraft ferried the Huygens probe to Titan, Saturns largest moon, and released it for a dramatic descent to the lunar surface. Cassini then moved on to conduct the most detailed observations to date of Saturn and its system of rings and moons.

While the spacecraft traveled to Saturn, the project team faced multiple challenges, including pressure from the scientific community to maximize opportunities for observations, difficulties coordinating a team across 17 countries and 10 time zones, and a technical error that jeopardized the success of the Huygens mission. This mini-case study looks at the programmatic and technical complexities of an international deep-space mission in which there was zero room for error.