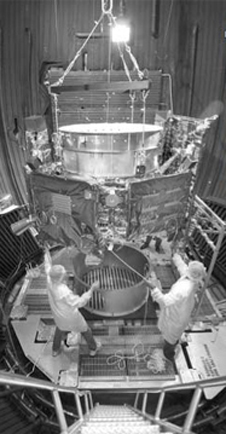 When NASA announced that the Lunar Reconnaissance Orbiter (LRO) would upgrade from a Delta II to a larger Atlas V launch vehicle, a window of opportunity opened for an additional mission to go to the moon. The Atlas V offered more capacity than LRO needed, creating space for a secondary payload.

The Exploration Sciences Mission Directorate (ESMD) posed a challenge to interested secondary payload teams: The chosen mission could not interfere with LRO, it could not exceed a mass of 1000 kilograms (kg), it could not go over a $79 million cost cap, and it had to be ready to fly on LRO’s schedule. Of the 19 proposals submitted, ESMD chose the Lunar CRater Observation and Sensing Satellite (LCROSS) a mission that sought to search for water on the moon by firing a rocket into the lunar surface and studying the debris resulting from the impact.

Ames Research Center served as the lead center for the project. The LCROSS project manager was charged with assembling a team that could develop a satellite on a shoestring while coordinating its efforts closely with LRO.