One aspect of my job as Payload Manager on the Advanced Composition Explorer (ACE) mission involved keeping track of what the different science teams were working on, and offering help where it was needed. At first it seemed like many of the scientists or their technical staff were not sure how safe it was to confide in me.

Everybody knew I had spent most of my career with NASA at the Jet Propulsion Laboratory (JPL). All of my staff, initially four of them, came from JPL too. Left to our own devices, would we impose onerous NASA rules that could stifle innovation in the ACE mission instrument development labs?

I knew of the strong relationships that had existed before I got there and would continue to exist
after I left.

The challenge to my team was getting the science groups to regard us as partners, or as people who could help them rather than as what they seemed to expect — a troop of requirements enforcers. There were nine instruments and twenty Co-Investigators (Co-Is) involved in ACE. They were scattered across the U.S., Switzerland, and Germany, mostly at universities and a few government labs.

At one university in particular, a designer held things very close to his chest. At first, we could barely get him to acknowledge we were in the room with him, until we arranged to help him solve a power supply problem. His boss, one of the Co-Is, recognized the contribution made by us outsiders, and figured maybe we could help solve a sensor head problem. There was no pressure; we waited for the skeptical designer to approach us. And when he did, we didn’t press him to let us get more involved. It was that kind of gentle touch that eventually changed peoples’ perception about what we were on this project for.

From the start, I decided a gentle touch was the best approach. Dr. Edward Stone, the Principal Investigator, had assembled a number of very experienced Co-Is with the nine instruments. I knew of the strong relationships that had existed before I got there and would continue to exist after I left. I never tried to put myself between Dr. Stone and his science teams. I wasn’t about to say to the Co-Is, “You can’t report to Dr. Stone, you’ve got to report to me first and I’ll report to him.” That would be dumb, I thought, and certainly do little to improve our standing at their labs. 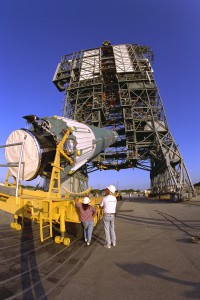 The first phase of a Delta II rocket is erected in Launch Complex 17A, at Cape Canaveral Air Station. The Delta launch vehicle dropped off long before the ACE observatory continued its push into deep space, where it orbits almost a million miles (1.5 million kilometers) away from the earth.

A lot of it just came down to working hard with the Co-Is at solving development problems, and building their trust in the process. When you spend days and nights with people, and you suffer with them, they begin to realize that you’re all on the same team. At the same time, they all knew we could bring outside resources to bear in addressing special problems. But our work also involved a clever amount of requirements tailoring.

I enjoyed telling people about how my payload team had adapted to the university environment in the spirit, if not the letter, of NASA practices. Understand: we still had to meet our own requirements and satisfy the Goddard project office. In the reliability and quality assurance (R&QA) area, for instance, we were expected to audit work processes used at “the contractor’s site.” In this case, that frequently translated to “at the universities.” Well, that word “audit” can create a terrified look on some people’s faces at the working level. But to begin the necessary audit on a low key, I can recall my visiting R&QA Manager walking down the hall at one university with his arm over a technician’s shoulder, asking “how’s it going, what’s happening here?” All the time, that technician never realized this was part of a work-process audit.

Throughout, a gentle touch paid off, and kept everyone working together toward the same goal: delivery of a performing payload, on time, and within budget.

Question
What lessons have you had to relearn throughout your career?

Allan Frandsen retired from NASA after a 36-year career, most of it at the Jet Propulsion Laboratory (JPL) in Pasadena, California, working on space science programs. His last assignment was as Science Payload Manager for the Advanced Composition Explorer (ACE) mission. During the 1980s he spent four years at the Office of Space Science at NASA Headquarters where he managed a number of successful programs.