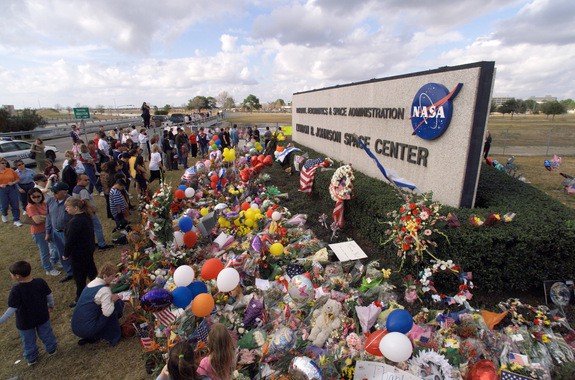 We had stepped outside the hangar at Kennedy Space Center to prepare for the return of Columbia, which was carrying our flight experiments. It was a minute late and still no sound. We would hear it before we saw it, and we expected to hear the big booms at any second. As the clocked ticked by, we knew something was wrong. Then somebody monitoring communications gave us the news. For the last 15 minutes, Columbia hadn’t been where it was supposed to be.

Soon, we had official word: the Shuttle was lost. I was emotionally unprepared at that moment to deal with what was happening, and yet I knew that my team would be looking to me for direction. The project team was supporting four experiments from Ames Research Center in California. As I struggled to assimilate the loss, I had no idea what I was going to do next. So many things ran through my head, and it was impossible to wrap my mind around it all.

Moving into action
But I had to do something. I was the project manager, and the team members, about a dozen of them, were waiting for direction. I asked them to gather in a room. We didn’t talk much about the loss; people weren’t ready to talk about it at that point. I made certain that they all knew there were phone numbers that they could call, and that there were people back at Ames who could talk to them about the accident, if they felt they needed to.

What project team whose work came to a premature end wouldn’t feel something missing, some need to get past the loss?

Initially, I encouraged people to go home, but most of my team made it very clear that they wanted to stay at Cape Canaveral. They’d been there for days or weeks or months, and they weren’t able to just walk away. I tried to give some structure to the project at that point, so that the team members felt productive. We set up daily morning meetings to update what was known, and to lay out the day’s activities. It was mostly busy work for everybody those first few days; just doing something helped us get through the day.

The hard part was figuring out what they needed from me, without my invading their space. We began plotting out what we would need to do over the coming days to wrap up our operations. The first practical thing would be preparing to pack up all the ground equipment once it was released. It took about seven or eight days, but we were able to get the bulk of the lab equipment, our supplies, and the backup flight hardware packed up and put away. Then, one by one, we headed home.

Gone, but not forgotten
This was my first Shuttle payload as project manager. We all know that projects often don’t go as planned, but the idea that something could go wrong on this scale had been beyond my thinking. Truth is, I don’t know that you can ever really be prepared for something like this.

When we think of tragedy striking, it is usually something personal and private. You get some respite by losing yourself in your work. But in this case, this very public tragedy happened in our workplace. Every time I saw or read something about it, I felt drained. Even worse were the times I got a call to identify a piece of hardware. I would look at the photo and it was like I was right there in the middle of the trauma, all over again.

Several weeks after we had returned to Ames, a group of people from the project suggested that we do something to memorialize the Columbia. As the project manager, I was the person they turned to for guidance, but I have to admit it wasn’t easy. Emotionally I wasn’t yet ready myself to be thinking of a memorial, but when the team suggested a memorial, I didn’t feel that I could say, “Yeah sure, good idea — now go ahead and plan it on your own.” So I arranged a meeting with a facilitator. I thought we would need someone who was removed enough to be able to keep all of us on task.

And, as I expected, it wasn’t like other meetings we typically have, because there was still a lot of raw emotion in that room. We were a close team to begin with; many of us still saw one another on a regular basis, but I became aware of emotions that I wouldn’t have normally been exposed to as their project manager. Even though you try to get to know everyone on a project, this was different because we were discussing feelings that are very personal to people. As people expressed themselves at our meeting, it made me acutely aware of how much more there is to project management than the technical aspect, and of how much you learn about your teammates by just listening to them. 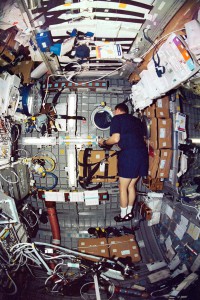 We hoped to honor the memory of the Columbia crew, but we also wanted to do something that honored the work of all the people at the center who were involved with our project. There were probably 200 people at Ames who had been involved in some way, shape, or form. Even though we had no science return from our experiment, we had accomplished quite a bit in the last four years. We wanted to recognize all the work that people had put into the project, and I think that we came up with a good concept, and, more importantly, it allowed team members a chance to take back some measure of control.

Gathering the troops
All projects closeout with an awards ceremony. For our project, even with its premature ending, anything less would have been unacceptable. After checking in with the team, it was clear what type of event people wanted, and when we finally held the ceremony in June, it was low-key and informal. Normally, we would have had a crewmember share his or her personal observations. This ceremony would have to be different.

We opened with a slideshow of images that lasted about ten minutes and included a lot of pre-flight work. We knew there were personal photos out there, so we had asked people to share them with us. We had pictures of people having fun on the project. Then we showed the crew photos and the on-orbit images that we had collected, with a beautiful soundtrack playing in the background. The folks who put this together did a wonderful job. We burned a CD copy of the show for every member of the core project team to take home.

The ceremony itself didn’t last as long as a typical end-of-project awards ceremony might have, but with Ames management present, we acknowledged everyone who worked on the project. I was concerned that it would be depressing, but it didn’t turn out that way at all. Afterwards, we went to a nearby park and had some beer and chips and talked.

At that point, people were ready to talk about what had happened; you might even say that they had reached a point where they needed to talk about it. Talking together was a positive experience for all of us. It helped provide us with a sense of closure on this project. Our situation, because of Columbia, was exceptional, but what project team whose work came to a premature end wouldn’t feel something missing, some need to get past the loss?

Many months later, we’re all still dealing with the tragedy, but we’re also moving on. We put together a final report that reminded us, once again, of all that we had accomplished. I think finishing the report helped all of us to move on.

I’m now the project manager for another set of experiments that we hope to fly in 2006. People ask me if I’ll do things differently this time, because of my experience on Columbia. On a technical level, the answer is, “No, not really.” Socially, it’s “Yes.” Project management is so much more than handling the technical issues and getting folks to do what you want them to do. It’s giving them the support they need, even when you have to dig down deep within yourself to do it.

Question
Failures of some scale are commonplace on projects. Most are not cataclysmic. To what extent, can you prepare for failures? Or does anticipating failure become a self-fulfilling prophecy?

Rudy Aquilina. “I like being involved in all aspects of a project — the engineering and the operations, as well as the science. It brings the project to life,” says Rudy Aquilina. Over the course of a 13-year trajectory at Lockheed Martin, Aquilina worked his way through the ranks from a verification engineer to deputy project manager. He was hired by NASA four years ago.”I think the life science research NASA is doing is just great research, and I’m happy to support it,” explains Aquilina. “My degree is in aerospace engineering, so my work supporting life science gives a new slant to my view of the world.”The project Aquilina managed on STS-107 supported four life science experiments:

BACTER, Bacterial Physiology and Virulence on Earth and in Microgravity

Find a complete list of STS-107 science activities on the Office of Biological and Physical Research website.