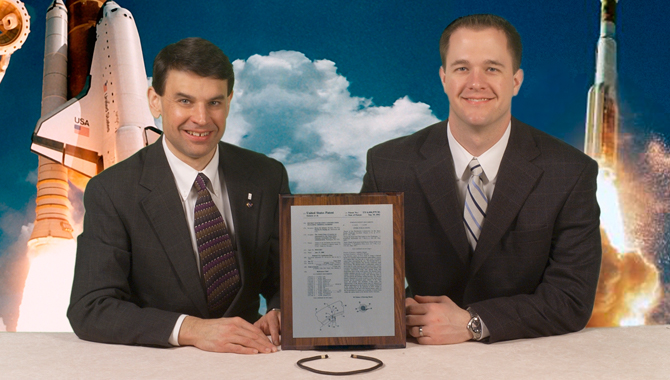 Steinetz and Dunlap are pictured with their thermal barrier and patent.
Credit: NASA

Laurie Stauber
A phone call from a concerned Thiokol engineer in 1997 led Dr. Bruce Steinetz and Mr. Patrick Dunlap of the Glenn Research Center to work on developing a flexible barrier that could withstand the extreme temperatures generated by solid rocket motors. The braided carbon-fiber thermal barrier they invented has won the NASA Government Inventions and Contributions Board Invention of the Year Award for 2004, which was presented at a special NASA Headquarters ceremony in September 2005.

Engineers at Thiokol (now ATK Thiokol) worried about heat effects they were finding on the O-rings that sealed the joints between nozzle sections of their reusable solid rocket motors, or RSRMs. In its worst form and combined with brittleness caused by cold weather at launch, a similar problem in the motor’s field joint led to the Challenger disaster in 1986; lesser nozzle O-ring heat effects have been observed on flights since then. One of the ATK Thiokol engineers remembered reading about an award Steinetz and Sirocky (a former colleague) had received for high-temperature seal work. He called Steinetz and asked if the seal team could apply their expertise to the solid rocket motor’s seal problem.

Steinetz and Sirocky’s 1997 Invention of the Year award was for a ceramic, braided rope seal used in the engines of the F-22 and other applications that require an effective insulator that is also flexible and resilient. But the RSRM presented a much greater challenge. The original ceramic seal was exposed to temperatures of around 1500°F. In ATK Thiokol’s rocket motor, the thermal barrier would face temperatures of around 5500°F. When the engine ?red, pressure in the RSRM nozzle joints would go from ambient atmospheric pressure of 14 lb./ square inch to 1,000 lb./square inch in less than a second. The thermal barriers would have to protect the booster’s O-rings from high temperatures while allowing enough gas through to provide the pressure needed to seat the O-rings firmly in their sealing positions. And the thermal barriers would have to survive for close to two-and-a-half minutes, the length of time that the rocket fired.

The challenge was all the greater because Steinetz and Dunlap had no money earmarked for the research. They could borrow a little funding from other projects that would benefit from what they learned, but they would have to find an inexpensive way to develop and test possible solutions.

Luckily, a standard oxy-acetylene torch generates about 5500°F of heat, so they had a ready-made, low-cost tool for screening potential thermal barrier materials. They first tested their ceramic braid seal. The torch burned through the material in just over six seconds. Next they tried a thermal barrier made of braided phenolic, a heat-resistant plastic. It lasted approximately 40 seconds. Their third test material was an eighth-inch diameter rope braided out of an aerospace grade carbon fiber, a close cousin to the material used in some golf club shafts, fishing rods, and other sports equipment. The carbon braid was promising, lasting about two minutes before it burned through. A quarter-inch braid lasted more than six minutes. They had taken a major step forward in solving the problem and communicated the results to ATK Thiokol. 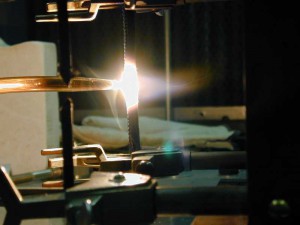 ATK Thiokol ran tests on the carbon-fiber thermal barriers, first in rockets with 70 lb. of thrust (as compared with the millions of pounds of thrust of their full-scale rockets) and then on larger, though still scaled-down versions of the RSRM. The thermal barriers passed with (literally) flying colors. Tests that recorded temperatures more than 2500°F on the upstream side of the dual thermal barriers registered less than 200°F on the other. The braided structure was key to solving the problem of letting sufficient pressure through to seat the downstream O-rings while protecting them from heat. The new thermal barriers will be used on ATK Thiokol RSRMs for shuttle mission STS-122.

Steinetz says that how the barrier produces so great a temperature drop is “a little bit of a mystery.” Looking back on the discovery process, he remarks on how “uneven” technical development is. “A lot of things lined up perfectly, and we were able to come to a solution in short order,” he says. “Many research projects don’t go like that.”

The thermal barriers have also solved a problem in the solid rocket motors Aerojet manufactures for the Lockheed-Martin Atlas V. The 67-foot-long Aerojet rockets are a single piece, with no joints except where the rocket body connects with the nozzle. In the summer of 2002, only months before the scheduled launch of an Atlas V to put a commercial satellite in orbit, an Aerojet rocket suffered a dramatic failure on the test stand due to hot gases compromising the nozzle seals and joint. Aerojet engineers asked Steinetz and Dunlap for help and quickly redesigned the joint using three of the braided carbon-fiber thermal barriers. The rocket was certified in June 2003, and the commercial launch took place the following month. Since then, Atlas Vs with pairs of Aerojet rockets have successfully launched the AMC-16 satellite that provides DISH network services and Inmarsat 4-F1, which delivers broadband communications to 86 percent of the world.

NASA will use the Atlas V to launch the Pluto Horizons Spacecraft in 2006 and is considering its use to launch payloads for the International Space Station and future Exploration Initiative missions. Steinetz and Dunlap have turned their attention to other challenges, including developing docking and berthing pressure seals for the Crew Exploration Vehicle and seals designed to mate a new Apollo-like heat shield to the vehicle structure. 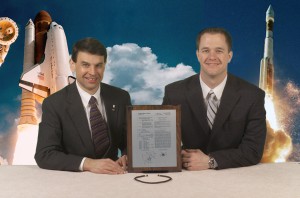 Steinetz and Dunlap are pictured with their thermal barrier and patent.