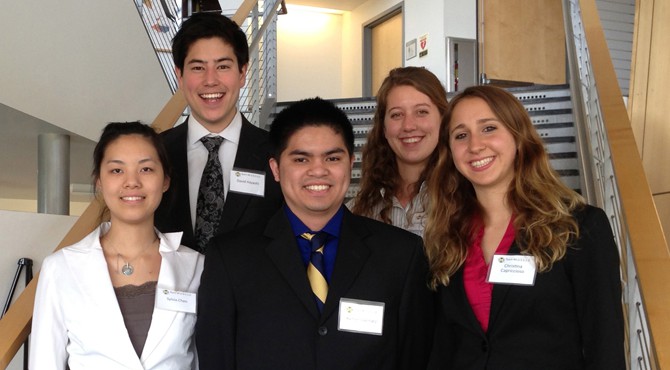 Looking for solutions to vexing technical problems can sometimes yield serendipitous results. Here at Glenn Research Center, the search for new medical expertise that will be needed for long-duration spaceflight has led to an unexpected, mutually beneficial relationship with several universities.

Crews on long-duration exploration missions beyond low-Earth orbit will need medical capabilities to diagnose and treat disease as well as to maintain health. The Exploration Medical Capability element at Glenn develops medical technologies, medical informatics, and clinical capabilities for different levels of care during those space missions. About two years ago, the Human Research Program (HRP) and Exploration Medical Capability (ExMC) project management team asked me to develop a Technology Watch solution for ExMC gap needs. ExMC gaps are areas where the agency has limited expertise. Industry, other agencies, or academia may already have some of that expertise or be in a position to develop it, but—since little had been published about these particular knowledge needs—it was difficult to gauge where that expertise and those capabilities were likely to exist.

We found … that universities are clamoring for meaningful senior engineering projects that require minimal funding. In addition, the turnaround time of student projects is relatively short; they begin in the fall semester, and results are presented to Glenn in May at the close of the school year.

My initial task involved gathering information specific to each gap need, preparing documentation, and then publishing in a variety of venues, including the Federal Laboratory Consortium (FLC) technology locator, and then online in both their national and Midwest newsletters. We held discussions at FLC meetings, both national and Midwest; at Cleveland Engineering Society, Bioenterprise, Nortech, and Baldwin Wallace University’s Center for Innovation and Growth. An additional document was published in the February 2012 issue of NASA Tech Briefs magazine to attract other potential knowledge sources. And we created an ExMC brochure for wide dissemination at conferences, to organizations with potential interest, and on technology web sites throughout the Midwest region, including the Autoharvest site, an automotive industry foundation based in Detroit. As a result, we received many valuable contacts.

That extensive list seemed promising, but we made little progress with our industry associates since the commercial appeal of this work is limited. We found, however, that universities are clamoring for meaningful senior engineering projects that require minimal funding. In addition, the turnaround time of student projects is relatively short; they begin in the fall semester, and results are presented to Glenn in May at the close of the school year. Most universities categorize these senior projects as “capstones”—student assignments often performed as a team effort and culminating in final reports that are a curriculum requirement for graduation.

We contacted regional universities based on geographic location and areas of specialization, with Glenn covering the Midwest. Our focus centered on universities that have a biomedical or biomechanical engineering department. I worked with either a department head or capstone advisory group at each university to develop the project, visiting Ohio State University, University of Michigan, University of Akron, and Wright State University to explain HRP and ExMC goals. The ExMC gap list was circulated among the appropriate faculty to determine a proper fit. Two or three potential topics were agreed upon, and then department advisors asked student teams to indicate their areas of interest. Given the demand for capstone work at multiple universities and the limited availability of funding and mentors, the program typically supports one project per university per school year. 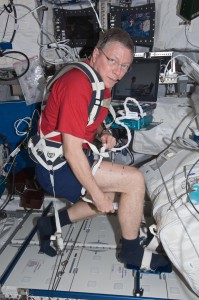 Crews on long-duration missions beyond low-Earth orbit will need medical capabilities to diagnose and treat disease as well as to maintain health.Photo Credit: NASA

At the close of their senior year, student teams present their findings. The university team provides Glenn with a final report that gives ExMC a valuable start on gap closure. This successful outreach activity also provides a meaningful experience for Glenn employees to act as a mentor or gap manager.

Aaron Weaver, of Glenn’s Bioscience and Technology Branch, commented, “During the mentoring experience, I felt it important for the students to guide their own development. They were not just responsible for developing the product; they were responsible for the development of the requirements, how the requirements would be verified, product development, and testing. This gave the students a feel for the entire design process and led to a great learning experience and final product.”

The capstones provide an inexpensive mechanism to obtain first-rate research results. According to ExMC Project Manager DeVon Griffin, “The Exploration Medical Capabilities element originally conceived of capstones more as an education/outreach activity. Given the high-quality work produced by teams mentored by GRC [Glenn], the element is now working to provide targeted research options and archiving all results. This activity has become a key part of the element’s technical work.” Dr. Griffin mentored both of the University of Akron teams in 2012.

The goal of the University of Akron team was to develop solutions addressing the agency need for a medical suction device for use in a microgravity environment. They built a proof-of-concept device that met the requirements of their lab-testing protocol. While the students were not able to conduct microgravity testing, they did conduct extensive computational-fluid-dynamics simulations to verify performance. Additionally, they conducted 1 g testing for validation in a gravitational field.

The goal of the University of Michigan team was to create a device that would immobilize the wrist, protect a fracture from external perturbations, maintain hand function for daily work, and have low mass and volume. At the close of the semester, the students determined the device was on track to be validated and that it functioned as designed. Rachael Schmedlen, student advisor for biomedical engineering at the University of Michigan, noted, “This is the first opportunity students have had to work with a real client and design, build, and test a prototype that aims to solve a need. They receive an appreciation for the practical challenges with the development of a new device.”

The university student-capstone projects have the potential to be expanded to assist other core competency areas at Glenn Research Center. The obvious benefits to the agency are low cost, relatively quick results in the form of a final report, and a fresh perspective on a serious technical challenge.

Six additional student-capstone projects have been carried out in 2013, including diagnosing and treating radiation sickness, University of Akron, mentored by Debra Goodenow-Messman of the Diagnostics and Data Systems Branch; treatment of soft-tissue injuries during Exploration-class missions, University of Michigan, mentored by Dr. Griffin of the ISS and Human Health Office; medical-suction fluid containment for microgravity and partial-gravity environments, Northwestern University, mentored by John McQuillen of the Fluid Physics and Transport Branch; medical device sterilization, Ohio State University, mentored by Lauren Best of the Bioscience and Technology Branch; eyewash in microgravity, Wright State University, mentored by McQuillen; and medical suction in microgravity, University of Illinois–Chicago. (This last capstone uses a NASA topic but has no NASA oversight or financial support.) The cost associated with the ExMC capstone projects ranges from $0 to $2,000 per project, with funding provided by HRP.

Mark Ruegsegger is assistant professor of practice in the biomedical engineering department at Ohio State University. He remarked, “This has been a very rewarding experience for the students. They have been able to work on an open-ended, real-world problem that has application beyond medicine in space. The team has also gained valuable skills in working with NASA professionals as project consultants.”

The university student-capstone projects have the potential to be expanded to assist other core competency areas at Glenn Research Center. The obvious benefits to the agency are low cost, relatively quick results in the form of a final report, and a fresh perspective on a serious technical challenge.

Capstone team from the University of Michigan.