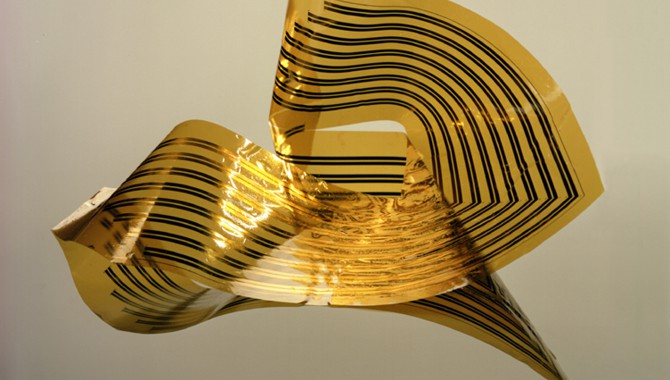 The Inventions and Contributions Board works closely with the NASA General Counsel each year to help determine and fund the NASA Invention of the Year. The 2005 winning team is from the Kennedy Space Center for their invention, Emulsified Zero-Valent Iron (EZVI). More information about EZVI and past NASA Invention of the Year technology can be found aticb.nasa.gov/invention.html.

In this issue of ASK Magazine, we will review a past invention from the Langley Research Center, LaRC Soluble Imide, which is an extremely tough, lightweight thermoplastic that is not only solvent-resistant but also has the ability to withstand temperature ranges from cryogenic levels to 200 degrees Celsius.

If you would like any more information about these technologies, or any technologies listed on our Web site, please feel free to contact me.

— Roger Forsgren,
Director of the Inventions and Contributions Board

Langley Research Center’s Soluble Imide, a high-performance polymer resin, was discovered while working on a project that never flew, a mach 2.2 aircraft. Robert Bryant was working with a team whose assignment was to develop adhesives and composites that would be required for the primary structural pieces of the high-speed aircraft. The soluble imide, known as LaRC-SI, was discovered in the laboratory by accident. After putting the components for a high-performance polymer into a reactor, a device for creating a controlled chemical reaction, Bryant expected to see the polymer precipitate as a powder once the two-stage reaction was complete, but it didn’t. Thinking he had messed something up, he repeated the reactor process with the same, unexpected results, then went down the hall to have a colleague run the reaction and double-check Bryant’s conclusions. His colleague got the same reaction. 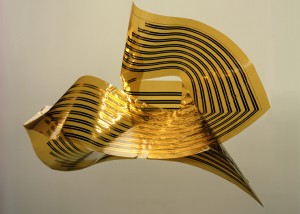 One of the invention’s many benefits is in its use as a flexible coating for electronic circuits.

“What is unique about SI is the way that it lends itself to ease in processing,” Bryant says. Most polyimides can only be solution processed after the first stage of their chemical reaction, requiring complex curing cycles to complete the last reaction sequence. LaRC-SI remains soluble in its final form, so no further chemical processing is required to produce final articles, like thin films and varnishes. Since producing SI does not require complex manufacturing techniques, it can be processed into useful forms for a variety of applications — mechanical parts, magnetic components, ceramics, highly filled parts, adhesives, composites, flexible circuits, multilayer printed circuits, and coatings on fiber-optics, wires, and metals.

The team Bryant was working with was too busy with the aircraft project to further develop the polymer resin. But Bryant thought it was worth developing, so he created a scenario for funding development and submitted it to the chief scientist at Langley. He received full funding and left the high-speed civil transport project to develop LaRC-SI.

Once he knew he had a product with many important applications, Bryant realized he needed to make potential users aware of it. He contacted a small company that agreed to make the base resin solution and dry powder of his new polymer, which saved him the time and cost of making a new polymer for each potential user. Then he needed to demonstrate the advantages his material could provide to industry. “I set out to prove how this could be used in different fabrication processes by making and testing the polymer using a variety of processes,” Bryant explains. But gaining people’s attention involved more than proof; it required promotion and samples.

“We put together a data sheet and articles so people could read about the polymer if they were interested,” Bryant says. He believed that providing a key application would also help create enough interest for LaRC-SI to really take off. “The personal computer didn’t go anywhere until somebody developed a killer application, which was the spreadsheet. So we had to develop a killer application,” he says. “That application was using this to laminate metals and ceramics to make actuators [a mechanical device for moving or controlling something].” There are many applications for an actuator with no traditional moving parts: valves, switches, speakers, force sensors, and accelerometers. For Bryant’s team, the first application was a familiar product: a valve. LaRC-SI’s performance in this application led to customers asking where they could get their hands on the new material or new device and experiment with them, which led to new items being developed.

Bryant observed how important marketing his new product was in getting people to see the value of using it in their own applications and products. He noted that many useful ideas and inventions never take off because they are not promoted or demonstrated enough to become well known. “People come up with different things every day,” he says. “In my case, and what I feel applies to all cases, you eventually have to say, ‘OK, you’ve developed something a little bit different. How can you show its advantage over what’s already out there?’” NASA’s name helped tremendously in creating this recognition and respect for the SI polymer. “People really recognize the NASA logo and NASA as a preeminent center for scientific development,” Bryant says. “Without that recognition, my invention may not have gone where it has gone. The fact that I work for NASA is an important part of this equation.”

Bryant also sees the importance of letting customers develop the invented product or materials further. He noted that some inventors can become too wrapped up in creating the perfect product for their newly invented material when they should be concentrating on getting it into as many different customers’ hands as possible. These customers are key to developing new uses for the material. Bryant explains, “When you invent something, you really have to get the stuff moving because the only way people benefit from it is by having access to it. A journal paper is nice, but it doesn’t give anybody access. It only gives them knowledge to go off and hopefully develop something themselves.” He said he learned this lesson the hard way by observing senior colleagues go through similar experiences.

Because of Bryant’s efforts, the polymer resin’s use has taken off in many different areas. Langley, Jet Propulsion Laboratory, and Glenn Research Center engineers are working on using the SI polymer in electronic applications, including experiments to use the new material to replace circuit boards. Bryant explains, “The idea is to eliminate the circuit board and use the actual structure of the satellite as the circuit board instead. I think the actual applications of this are still a few years away, but we’ve been able to demonstrate it’s possible.” By prefabricating the polymer boards, bonding them to the structure during fabrication, and then soldering or gluing the electrical components to the LaRC-SI circuit board, the need for a separate support structure, circuit board mounting hanger, and heat sink is eliminated. The new configuration still carries the load, but it also serves as a heat sink and an electrical panel, so more can fit into a smaller space.

In the commercial sector, the polymer resin is being used to make ceramic actuators. These are used in machine tools, wireless switching applications, transformers, and many other devices. The largest and most valuable application is in wire coating. Several medical products, including pacemakers, plan to use this polymer resin to coat wires, which is the first big change in this system in twenty years. LaRC-SI, in addition to being physically durable, is also biologically inert, so it is not readily attacked by the body’s immune system or degraded by biological fluids.

The SI polymer resin was never used in the high-speed aircraft program for which it was developed, but this is not uncommon. “You meet the milestones and goals of a program, and while you are doing that, you spin off so much other relevant technology,” Bryant says. “The trick is letting other people know what you’ve discovered after you’ve stumbled upon it. In my case, if I hadn’t pursued developing and marketing the polymer, this innovation would have died with the original program.”

Ben Bruneau works as a Knowledge Sharing Analyst in the Academy of Program/ Project and Engineering Leadership (APPEL). He contributes to the programs under the Knowledge Sharing line of APPEL. These contributions include work with ASK Magazine, Masters Forums, and the Project Management Challenge conference. Ben holds a Bachelor of Science Degree in History from the University of South Dakota.