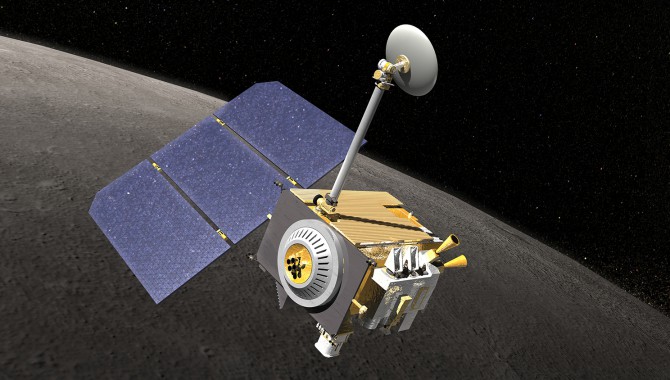 Spinning the upper stage of a rocket in flight is one way to stabilize the vehicle, just as a bullet spins to stay on course. But liquid propellant sloshing around in a spacecraft’s fuel tanks produces a wobble, or nutation, that can cause instability and alter flight trajectory. The rate of wobble increase is measured by something called nutation time constant (NTC). 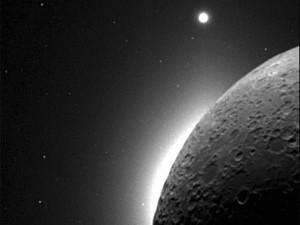 In 1994, during its flight, the Clementine spacecraft returned images of the moon. The LRO will travel to the moon in 2008 and map the surface to help pave the way for humans to return.
Photo Credit: NASA/JPL/USGS

In the case of the Lunar Reconnaissance Orbiter (LRO) with its large propulsion tank, NTC presented a considerable problem. With the moon as LRO’s destination, much of the spacecraft’s mass had to be fuel—liquid propellant in the mission’s initial design. “Driven by the schedule and the hardware availability, we had baselined a large, single tank because that worked well and the design was mass efficient,” said Craig Tooley, LRO project manager, in a video interview for the Exploration Systems Mission Directorate (ESMD) Integrated Collaborative Environment (ICE) portal. “With that came uncertainty about the management of the slosh during the spinning phase of the Delta II rocket we were on.”

LRO was scheduled for launch in the fall of 2008 for a yearlong mission orbiting the moon as an advance scout for the Constellation program’s human space flight missions. In early 2005, with an important design review approaching, consideration of the options for retiring the NTC risk became a paramount issue for the management team.

As this risk became more and more likely,” recalled Tooley, “we were at a juncture where we decided that it was, shall we say, frightening us, and we needed to take it forward with fairly significant mitigations. This meant launching LRO with a solid rocket motor and reducing the need for quantity of fuel or, as ESMD understood the alternative option, launching LRO on a non-spinning vehicle.”

It was a daunting challenge at a critical juncture. As Scott Horowitz, associate administrator of ESMD, put it, “This one was so far outside the box that you could just look at it and say this is going to be really hard to solve or you may not be able to solve it without a major redesign of the spacecraft. They were coming into PDR [preliminary design review]. By that time, you want things pretty stable. You don’t want a major redesign of the spacecraft—that’s the time you don’t want to be changing your requirements unless you have to.”

How the risk was managed demonstrated a “process working very, very well,” said Tooley. Successful mitigation hinged on open, two-way communication throughout the decisionmaking process as the risk was escalated from the project to the program level. It required a strategy and plan that reflected an enterprise risk management approach. NTC presented some other characteristics as well of a model “knowledge-based risk,” or KBR, the linchpin concept in an initiative at ESMD to integrate risk and knowledge management: communication was critical, analysis of alternatives would lead to opportunity, and the risk appeared late on the project timeline. It was adopted by Dave Lengyel, the directorate’s risk and knowledge officer, as the flagship example of a KBR. [See related article.]

A launch delay for LRO was looming if the NTC problem could not be resolved without redesigning the craft—an option, Tooley said, that simply “wasn’t compatible with the time we had.” On the other hand, “If we actually went and carried this risk forward unmitigated and launched with a great uncertainty, the risk was the rocket flight wouldn’t follow the right trajectory when we got to the moon—and obviously we were never going to go down the path where we launched with that kind of risk.”

Carl Walz, a former shuttle astronaut and acting director for ESMD’s Advanced Capabilities Division, which oversees LRO as part of the Lunar Precursor Robotic Program, described the pressure on the project. “As the Vision for Space Exploration articulated, this is really our first big mission to the moon. We wanted to make sure we got out of the starting gate on time with a winner. The challenge was the schedule because we were trying to make the end of 2008. It was a very aggressive development schedule.

“We had pulled one of the best project managers in Craig and given him a tough task: have this thing ready to fly, and fast. We were concerned about schedule because when we compared LRO to other projects of about the same magnitude, it was clear that we were bucking a trend, that typically these projects took longer than what we were projecting. We kicked around the options: ‘Well, we might be okay, we might be able to solve the nutation time constant [with spacecraft redesign].’ But there was significant risk, and there was no confidence that we could find a way to deal with that.”

“They were in a bad place time-wise to handle a problem of the magnitude they were facing,” Horowitz recalled, “so they either had to make a decision to make a major design change to this vehicle … or they were probably going to not be able to solve this problem in the time that they had to solve it, with the resources they had. In my opinion they couldn’t have gotten there from here with all the constraints.” 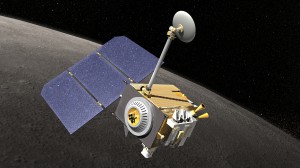 The nature of the risk and the specialized analysis it required made mitigating NTC especially tricky. As Tooley explained in the ICE video interview, “Spinning spacecraft with large volumes of fluid is something that has been tackled, but they’re basically unique design problems.” LRO consulted the small cadre of experts in the discipline, who recommended a series of scale-model tests and design iterations. But there wasn’t time in LRO’s schedule to allow for that work.

Horowitz, a former shuttle astronaut like Walz and an aerospace engineer by training, explained the typical process. “The thing you want to do is survey everything that has gone before and at least envelop your problem. So we say, ‘Hey, these people had a problem and the mass of their tank was this high and their rotation rate was this high,’ and you plot all those points, and if you’re somewhere in there, then you have a chance of solving your problem. But if you look at all the work people have done for a similar problem and you’re here”—LRO’s unique position—“then you’ve got a real problem on your hands.” The LRO mission, Horowitz believed, needed “to find another path” to mitigate its NTC problem—and soon.

“As the nutation time constant risk rose in likelihood,” said Tooley, “we decided it warranted, independent of our risk-management process, discussion and decision making at the headquarters/directorate level. We presented the potential mitigation for the risk and the options for what could be done about it, thus enabling Scott Horowitz to make a decision.”

The solution—changing launch vehicles from a Delta II to the bigger Atlas V, which didn’t have spin stabilization—would not only mitigate the NTC risk, it would provide an unexpected bonus. Tooley explained how the mitigation decision process rippled through spacecraft design considerations, influenced cost, and opened the door for a secondary payload.

“One of the weighting factors was the larger launch vehicle. The fact that it was larger didn’t actually matter—it was that it had a guided third stage, not a spinning third stage. That enabled us to do some simplifications of the design. We said, ‘Well, we have a larger fairing now, how could we use this potential decision to mitigate some of the impacts of this redesign we have to do?’ [Rather than buying a single large tank that would have needed baffles on a Delta], now we’ll use some existing tanks we can get ahold of—there were actually tanks from the cancelled X38 programs—that we couldn’t fit in the Delta fairing … and get ahead on that part of the design cycle. That’ll make our jump a little easier as we redesign.” In addition, the larger fairing allowed for the use of a more traditional panel solar array rather than the originally planned complex folding array. “We exploited all the fringe benefits of going on the larger launch vehicle to help reduce the risk that the redesign itself would impact our schedule,” Tooley said.

They basically came up with their own solution … by having that open communication and not just saying, “we got a problem,” but “here are all the potential ideas we think we have to solve this risk.”

As the project manager described it, this was all part of the “calculus” done at the associate administrator level. The result of this calculation was not only NTC risk mitigation but the addition of the Lunar Crater Observation and Sensing Satellite (LCROSS), a mission designed to excavate a polar crater on the moon for buried ice. “Our side was fairly constrained by our design, so there was a lot of mass margin going to go to waste. They exploited that opportunity to send a companion secondary payload to the moon to really augment the questions that LRO was addressing. That made the increased cost of the launch vehicle acceptable to ESMD, because they actually fly two missions instead of just one, as well as reducing the risk of the primary mission.”

Horowitz concurred on the dual-benefit byproduct: “They didn’t have to do any major redesign of the spacecraft, they’re on schedule … and we got a whole other spacecraft out of the deal.”

The process of retiring the NTC risk on LRO illustrated the importance of an underlying principle of risk and knowledge management integration: communication. As Tooley said, “We were tracking this risk as it elevated in our awareness, until it precipitated the discussion that we should take this forward to an ESMD decision level, and we said, ‘Yo, folks, we think this risk warrants some higher-level discussion.’”

From the ESMD viewpoint, said Walz, the process was paramount. “What really stood out was the ability of the project to go all the way to the top and having the folks at the top be willing to hear the issue and entertain something as radical as going out and getting a brand new launch vehicle. It was the freedom to be able to come forward with potential solutions and then, given the decision-making authority, the latitude to go forward and accommodate another mission.”

As Horowitz recalled in the ICE interview, “What I’ve been real happy with on this project is the fact that the communication is good. People shouldn’t be afraid to escalate their risks …. What I have found is that ideas basically generate more ideas …. [That] helps you make connections to other experiences that you might have. By elevating it, with potential different solutions, it wasn’t us saying, ‘Hey, go stick it on another rocket.’ Somebody in the group somewhere had come up with that idea, and so we started probing and asking more questions and asking them to dig deeper, and then they basically came up with their own solution … by having that open communication and not just saying, ‘we got a problem,’ but ‘here are all the potential ideas we think we have to solve this risk.’”

Earlier this year, LRO was in the middle of the integration phase, being prepared for thermal vacuum testing in simulated space conditions. The mission was on schedule for an October launch.

The process of mitigating the NTC risk was ripe for capture in ESMD’s knowledge-based risk system, which is why Lengyel, the ESMD risk and knowledge management officer, showcased it on the directorate’s ICE portal as the first KBR based on a closed risk. When Constellation Program Manager Jeff Hanley projected NTC on the screen at a review as an exemplar of knowledge-based risk management, Lengyel was satisfied: The integrative approach to addressing risk, based on knowledge sharing, had begun to take flight.