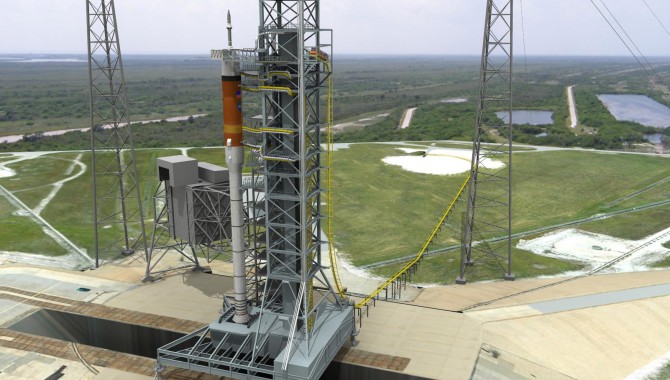 For the designers of a new launch vehicle, reducing mass is a major goal and seems an absolute good—the lower the mass, the less energy needed to put a spacecraft in orbit. Given a choice, for instance, among different temperatures for storing pressurized helium on the vehicle, designers of the Ares 1 upper stage are likely to choose the lowest temperature option to improve performance and save weight. But the effects of that choice on ground operations could be extensive and expensive. The need to supply the extra-cold helium would add complexity and weight to the mobile launcher and crawler-transporter, which carry the launch vehicle from the Vehicle Assembly Building to the launchpad. That change could require a new kind of rock for the crawlerway that the crawler travels on, and that change might have its own further consequences. Looking at the mission as a whole, what seemed like an easy way to save 300 lbs. on the launch vehicle turns into a design choice that would cost $25 million in ground systems modifications. 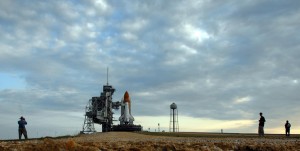 The crawlerway, in the foreground, still bears the tracks of the crawler-transporter that delivered Space Shuttle Endeavour to Launch Pad 39A, in the background.
Photo Credit: NASA/Ken Thornsley

In fact, many large and small decisions about the design of launch vehicles and spacecraft have profound implications for the speed, reliability, and cost of launch processes and other ground operations. Pat Simpkins, director of engineering at Kennedy Space Center (KSC), describes the consequences of such decisions as being like “the house that Jack built”—the nursery rhyme that describes a long chain of escalating linked actions. (“This is the cow with the crumpled horn,/ That tossed the dog,/ That worried the cat,/ That killed the rat,/ That ate the malt/ That lay in the house that Jack built.”) As in the case of the pressurized helium tank options, a single design decision can unleash a cascade of effects that the designer cannot foresee and probably does not even think about. Simpkins talks about the importance of “infusing operability” into the next generation of launch vehicles and crew vehicles by making the knowledge KSC has gained from decades of launch experience an integral part of the design discussion and decision making.

Sometimes a design that improves ground operations does not even require significant trade-offs from launch vehicle or spacecraft designers. Designers may simply not be aware that one of two options they see as essentially equal may in fact be a much better choice in regards to ground systems. For instance, the original design for the Crew Exploration Vehicle (CEV) had access points on different sides of the vehicle, which would require building a second tower. Designing the vehicle with all the access points in one vertical line will save many millions of dollars and reduce complexity. The integrated design team at KSC worked with the CEV designers to relocate the hatch and eliminate the need for the second tower at the launchpad.

Alan Littlefield, chief engineer for the mobile launcher (a transportable launch base), says that KSC has always tried to use what it has learned from decades of launch experience to steer design teams in the right direction, but ground operations rarely played an extensive official role in the design process in the past. That is changing with the Constellation program, adds mobile launcher project manager Larry Schultz. He says that operations’ contribution to the design process for the new Ares launch vehicle and Orion crew vehicle is “ten times what it was for the shuttle.”

KSC’s direct involvement in design discussions and its ability to question design ideas is new and important. The technical and budgetary challenges of the Agency’s new space exploration goals make it essential to apply all NASA’s best experience-based knowledge to the design of new vehicles and spacecraft. The cost and reliability of the new technology throughout its life cycle—design, manufacture, and many launches—need to be considered up front and inform design choices. 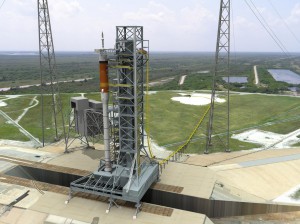 An artist’s rendition of an Ares I rocket at Launch Pad 39B at Kennedy Space Center. The pad, previously used for Apollo and shuttle launches, will be modified to support future launches of Ares and Orion spacecraft.
Image Credit: NASA

The future missions being planned now will call for quick turnarounds and back-to-back launches to support the in-orbit rendezvous of cargo and crew vehicles. Among the important strategies for improved operability will be designing vehicles that require minimal testing on the launchpad and will be as close as possible to ready to fly when they reach the pad. The Space Shuttle requires six to eight weeks of testing and preparation on the launchpad; the goal for new vehicles would be only a week or two on the pad.

Cutting the current time that dramatically would have several clear advantages. It would mean less exposure to the elements—think of the hail damage that delayed Atlantis’s STS-117 mission. And, if problems do arise during preparation and testing, they can usually be handled better in the Vehicle Assembly Building, which has better analytical facilities and better access to all parts of the vehicle than the launchpad.

Not all of KSC’s recommendations are adopted, of course, but Littlefield says that decisions are at least made with an understanding of the overall economic and operational costs. And sometimes the discussions leading to decisions that go against KSC’s recommendations generate new ideas and better designs that help improve performance or reduce costs. The discussion about supplying the Ares 1 upper stage vehicle with helium for pressurization considered, among other things, raising the helium to a higher temperature to reduce the effects of cost and weight on the mobile launcher. Ultimately, that option was not chosen, but the conversation eventually led to a design that provided the lowest practical helium temperature and promised improved performance at reduced cost.

Larry Schultz is the program manager for the mobile launcher.

Pat Simpkins is the director of engineering at Kennedy Space Center.