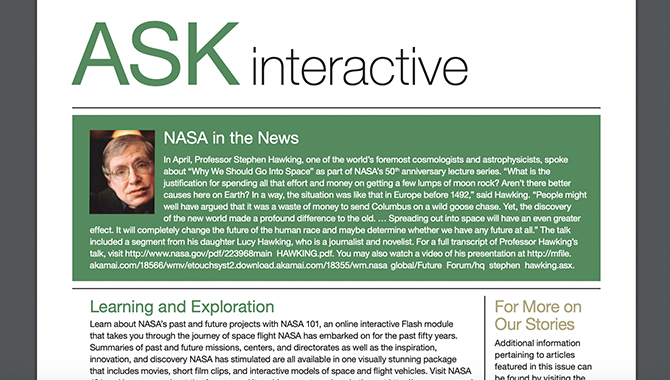 In April, Professor Stephen Hawking, one of the world’s foremost cosmologists and astrophysicists, spoke about “Why We Should Go Into Space” as part of NASA’s 50th anniversary lecture series.

“What is the justification for spending all that effort and money on getting a few lumps of moon rock? Aren’t there better causes here on Earth? In a way, the situation was like that in Europe before 1492,” said Hawking. “People might well have argued that it was a waste of money to send Columbus on a wild goose chase. Yet, the discovery of the new world made a profound difference to the old. … Spreading out into space will have an even greater effect. It will completely change the future of the human race and maybe determine whether we have any future at all.” The talk included a segment from his daughter Lucy Hawking, who is a journalist and novelist. For a full transcript of Professor Hawking’s talk, visit here. You may also watch a video of his presentation here.

Learn about NASA’s past and future projects with NASA 101, an online interactive Flash module that takes you through the journey of space flight NASA has embarked on for the past fifty years. Summaries of past and future missions, centers, and directorates as well as the inspiration, innovation, and discovery NASA has stimulated are all available in one visually stunning package that includes movies, short film clips, and interactive models of space and flight vehicles. Visit NASA 101 and learn more about the Agency and its achievements and aspirations athttps://www.nasa.gov/ externalflash/nasa101/index.html.

NASA’s Science Mission Directorate recently launched a new Web site that provides enhanced and engaging information about NASA’s scientific endeavors and achievements. The site will provide in-depth coverage of NASA’s past, present, and future science missions with features that include the following:

Additional information pertaining to articles featured in this issue can be found by visiting the following Web sites:

We welcome your comments on what you’ve read in this issue of ASK and your suggestions for articles you would like to see in future issues. Share your thoughts with us here.