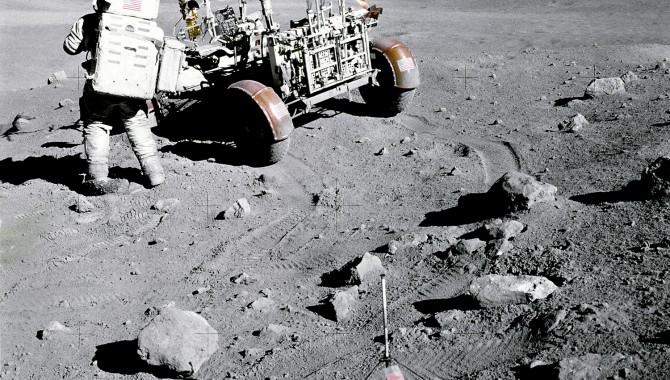 By Dr. James B. Garvin

For fifty years, NASA has promoted scientific investigations enabled by the space-borne vantage point it has pioneered. Beginning with the first scientific measurements made in space by Explorer 1, major discoveries have been made about the workings of the universe, our home planet Earth, the sun, and our solar system, many of which were never imagined prior to the so-called Space Age. Were the groundbreaking discoveries of NASA robotic and human missions of exploration an anticipated consequence or a side benefit of the classical scientific method applied to space exploration?

NASA’s missions are often described as technology-enabled and science-driven. This has been the hallmark of such icons of discovery as the Hubble Space Telescope, the Earth Observing System, the Cassini mission to Saturn, and the Mars Exploration Rovers (MER). Many of the breakthrough paradigm shifts in scientific understanding of the earth, universe, solar system, and sun have been catalyzed by particular missions with an emphasis on “discovery-driven science,” which provides a tightly interwoven blend of technology-enabled measurements and broad, reconnaissance-level questions. Not all NASA missions, whether human-based or robotic, can be characterized as “discovery driven,” but many have achieved unanticipated discoveries. A review of those NASA missions that best embody discovery-driven science suggests that attention to the discovery impact potential of breakthrough measurements in space will characterize NASA’s next fifty years of scientific exploration.

NASA’s flurry of “first-ever” missions during its first decade of existence were intended to provide initial surveys of the universe using instruments that had never before flown in space. Because such missions were our first foray to these targets, the path-finding measurements they provided established the basis for fundamental changes in scientific knowledge about the planets and the wider universe. Missions such as Ranger, Surveyor, and Lunar Orbiter were NASA’s initial reconnaissance of the moon, and they blended engineering requirements with scientific measurements. Profound discoveries resulted in each case, with critical demonstrations of enabling technological capabilities essential to the later success of the Apollo lunar surface missions. 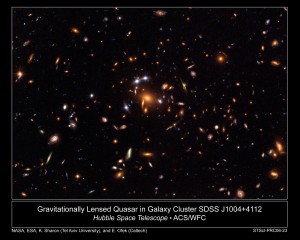 The concept of discovery-driven science may have been intrinsic to NASA’s first missions to the frontiers of space, but it probably did not emerge as a powerful theme until the pioneering wave of planetary reconnaissance missions that began in the 1970s and continue today. Missions such as Mariner 9 (Mars), Viking (Mars), Voyager (outer planets), Pioneer Venus, and the Landsat series (Earth) were conceived to revolutionize our scientific understanding of key aspects of the universe using robotic spacecraft equipped with next-generation instrumentation. Due in many cases to the unknown character of the target destinations, the measurements acquired were often broad in scope and addressed key environmental issues. These 1970s missions helped define the era of discovery-driven science that blossomed from the catalytic results they achieved.

We can define discovery-driven science in several ways. First, it embodies scientific investigations with measurement capabilities that go beyond the scope of basic scientific hypotheses that are the primary focus of any given mission. An example is any astronomical observatory in space that employs its imaging ability to “see” at new spatial and spectral scales. Second, it specifically outlines areas of high science-discovery potential tied to one or more scientific questions for which there are multiple possible outcomes, including those that cannot be considered prior to the mission. While all scientific investigations can potentially “discover” new aspects of the physical universe, some are inherently more focused on quantifiable, incremental improvements in the state of knowledge associated with a small number of specific questions or issues. Discovery-driven science goes beyond this approach to embrace more ambitious measurements of the unknown or, as it is sometimes called, “the previously un-measurable.”

Virtually all of NASA’s early scientific missions demonstrated key aspects of discovery-driven science, but it was not until the past fifteen years or so that NASA has explicitly addressed the need for missions that emphasize this approach. In addition, human exploration missions to deep space that include discovery-driven science are now being considered in response to NASA’s implementation of the Vision for Space Exploration.

The Apollo missions to the moon dramatically demonstrated how human activities can accentuate discovery-driven science, thanks to the intrinsic adaptability of the human explorer “on site.” The Apollo J-series missions were guided by scientific objectives with abundant discovery potential and may have been the very first intentional discovery-driven science investigations implemented by NASA. These breathtaking missions of discovery catalyzed an era of unprecedented robotic reconnaissance of the solar system, including the Viking missions to Mars and the Voyager “grand tour” mission to the outer solar system.

A few specific examples illustrate well the benefits of an exploration strategy that embodies discovery-driven science.

Perhaps the epitome of discovery-driven science is the Hubble Space Telescope, which has pioneered the space frontier for nearly twenty years and, in doing so, has produced multiple major discoveries about the accessible universe. The power of Hubble has always been its incredible “agility”—its ability to do many things well—which is a hallmark of discoverydriven science. In addressing fundamental questions within astrophysics and planetary sciences, it has produced observations that have changed viewpoints about basic processes, extending from the earth’s moon to the so-called deep field. Hubble is an astronomical reconnaissance system capable of using its vantage point to pursue discovery-guided questions for which there are few, if any, preconceived ideas as to what will be observed. It has been able to discover new truths about objects in our own solar system, including dwarf planets such as Pluto, main-belt asteroids such as Ceres, and even the moon and Mars.

In an unprecedented use of its unique ultraviolet “vision,” NASA directed Hubble to investigate the lunar surface in 2005 to better understand its resource potential. It was able to remotely measure the elusive signature of titanium-dioxidebearing soils that extended far beyond those directly sampled by the crew of the Apollo 17 mission in 1972. Oxygen could be readily harvested from such soils for exploration-related uses, and their identification could prove to be of strategic value when NASA’s human exploration of the moon resumes by 2020. The ultimate legacy of Hubble’s rich array of scientific discoveries can be measured by the voluminous record of publications that have resulted from its observations. The Hubble-related scientific publication record is testament to its role as a leading example of intentional discovery-driven science in action.

The NASA Earth Observing System (EOS) was originally conceived as a “Mission to Planet Earth” in the late 1980s. It was designed to provide dozens of fundamental measurement sets that describe the earth “system” with adequate fidelity to constrain and amplify physical models of the behavior of the system, models that could help us improve the quality of life on Earth. While measuring the variables of our home planet via a constellation of Earth-orbiting platforms, EOS was also intended to catalyze discovery-driven scientific investigations related to climate variability. The massive amount of decisionrelevant information that has been produced by the EOS suite of spacecraft has had a revolutionary impact on our understanding of the short-term climate of our planet, including the dynamics of ice cover and its relation to sea-level rise. Clearly, NASA’s Earth science observations have produced dramatic discoveries.

NASA’s first competed Earth system science mission, GRACE, exemplifies a new flavor of discovery-driven science by measuring the intricacies of time-variable gravity as it relates to heat flow in the oceans and the changing ice sheets of our planet. NASA is poised to continue its legacy of groundbreaking Earth science in the years ahead using discovery-driven science approaches for both small and large missions. 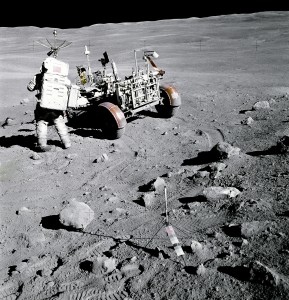 Apollo 16 astronaut Charles M. Duke Jr. stands near the lunar roving vehicle during the second Apollo 16 extravehicular activity at the Descartes landing site. Apollo surface missions such as Apollo 16 provided ample opportunities for discovery-driven science in action by means of human explorers “on site” adapting to what they observed and refining their activities accordingly.
Photo Credit: NASA

Perhaps the other most visible example of discovery-driven science at a NASA program level is the past approximately eight years of the Mars Exploration Program (MEP). After program restructuring around 2000, the resulting new architecture embraced discovery-driven science in multiple ways, including an openly competed Mars Scout program element, as well as via specific strategic missions. Specific attention to maximizing discovery potential was established as a MEP guiding philosophy. This enabled decisions that resulted in uniquely discovery-driven missions such as the Mars Exploration Rovers Spirit and Opportunity, the Mars Reconnaissance Orbiter (MRO), and the 2009 Mars Science Laboratory, presently under development at the Jet Propulsion Laboratory.

The MRO mission was developed to specifically address discovery-oriented questions about Mars for which there were no easy answers. The search for mineral evidence of the history and persistence of water in the geologic history of Mars had historically proven to be an elusive one, but MRO’s instruments have discovered new possibilities that were previously unsuspected. MRO involves three new classes of remotesensing instruments that have dramatically increased resolution on surface and subsurface processes, and measurements from them have demonstrated the value of high-discovery potential experiments at the edge of the science frontier. The first Mars Scout mission, Phoenix, also illustrates substantial attention to discovery potential in its choice of a landing site in the high latitude polar plains as well as its inclusion of instruments such as an atmospheric lidar and the first atomic force microscope in space. These new measurement systems have probed previously unknown aspects of the local Martian “system” and, in doing so, have discovered important aspects of how Mars operates at scales as fine as nanometers. The current and ongoing Mars program within NASA provides ample evidence of the positive influence and value of discovery-driven science as a guiding philosophy.

The Past and the Future

NASA’s first fifty years have included a variety of missions that embody the philosophy of discovery-driven science. Monumental icons to science such as Hubble, EOS, and MEP, among others, present dramatic evidence of the value of this approach. New scientific paradigms have been established by discovery-driven scientific missions of exploration, starting with the Apollo lunar surface missions and continuing today with ongoing missions of discovery such as Cassini at Saturn, MESSENGER at Mercury, Phoenix on Mars, and the EOS constellation in Earth orbit. The next fifty years of NASA missions can sustain the lesson of discovery-driven science by propagating the philosophy into the upcoming era of more tightly integrated human and robotic exploration missions, starting with our return to the moon. The science frontier is vast. Deploying innovative approaches for extending the discovery-driven science of NASA missions in the next decades will assuredly continue to expand our understanding of the universe in which we live.

James B. Garvin is the chief scientist at Goddard Space Flight Center.

More articles by James B. Garvin