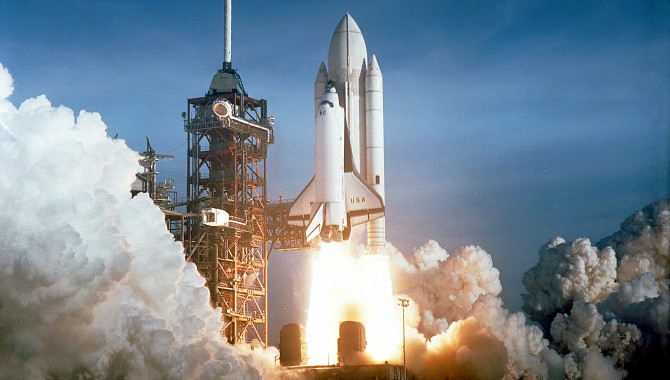 I was the project manager for the Space Shuttle external tank for eleven years, from the planning days in 1971 through the launch of the sixth shuttle flight in 1983. Work on the shuttle program was widely distributed. The program office was at Johnson Space Center; the engines, solid rockets, and tanks were developed at Marshall; and ground operations were at Kennedy, with major work done by contractors North American Aviation, Lockheed Martin, Morton Thiokol, and Rocketdyne, among others. Although centers and contractors had primary responsibility for different elements of the shuttle system, those elements were tightly interrelated. For instance, avionics and flight control systems were on the orbiter but directly affected the control of the main engines and solid rocket boosters, so success depended on a tremendous amount of coordination and integration. That meant multicenter working groups meeting and communicating frequently, lots of travel, many meetings at Johnson with management and technical people, and daily communication at the program and project level. The frequent budget discussions were held at NASA Headquarters in Washington, D.C.

Our first proposed booster–orbiter configuration featured a flyback booster and smaller engines on the orbiter than those in the final design. The proposed engines would have had enough power to circularize the shuttle’s orbit but not enough to do the heavy lifting to reach orbital velocity. We envisioned ten flights a year. The problem was that design and development of that configuration would cost about $10 billion and Congress was only willing to authorize half as much. We were disappointed, but we had to find a way to live with that budget constraint. It was that or no program at all. We came back quickly with a new $5 billion configuration and program. It was essentially the design that was eventually built: recoverable solid rocket boosters and a disposable external fuel tank that supplied the propellants to the orbiter’s three main engines.

Our initially more expensive design would have been more economical in the long run. In almost any space program, the bigger investment you can make up front, the lower the operating costs will be. As a rule, those investments pay off, but political and economic realities often stand in the way of making them. 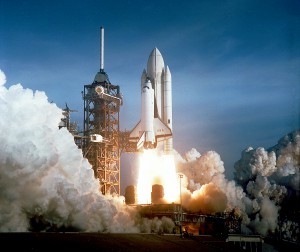 The April 12 launch at Pad 39A of STS-1, just seconds past 7:00 a.m., carries astronauts John Young and Robert Crippen into an Earth orbital mission scheduled to last for fifty-four hours, ending with an unpowered landing at Edwards Air Force Base in California.
Photo Credit: NASA

We knew, too, that the proposed sixty shuttle flights a year in the revised plan were probably not realistic. The number was arrived at by doing the math on how many flights would be needed to meet the financial goals of low pre-launch cost.

From a technical point of view, the structure of the external tank was not especially complicated. It was similar to the second stage of Apollo’s Saturn V—a bit smaller in diameter but longer and using similar materials and welding techniques. The real technical challenge came from the fact that the orbiter tiles could be damaged by ice falling off the tank during launch, so the external tank needed enough insulation to keep the outside temperature above 32°F. (The internal temperature was approximately -400°F.) We needed to apply insulating foam to one-third of an acre of tank surface, much of it through automated spraying, but with joint and bracket insulation applied by hand.

The first flight was delayed several weeks because a large section of insulation over the liquid oxygen tank delaminated during the first tanking test at Kennedy Space Center. It turned out that the material bonding the insulation to the tank skin and the foam itself had not been applied properly. That had to be cleaned off and replaced entirely by hand on the launchpad.

One of the important lessons of a succesful program transition is the value of moving people over to the new program and involving them in the design process as early as possible.

Over time, the foam, which had to be both light and aerodynamically resilient, was reformulated eight times when we had to find replacements for chemicals used in its manufacture that were judged to be polluting. A great deal of hard work went into making the foam insulation as safe and effective as possible. The Columbia accident showed that we needed to make improvements. Most of the improvements were made in the manual applications and processes.

Another technical challenge was understanding the aerodynamic stresses on the various elements of shuttle system, including, of course, max ascent loads—the point of maximum dynamic pressure. The analysis was extremely complicated and needed to be done from a systems standpoint, rather than separately for parts of the whole. That was another instance when communication and coordination were essential. Emphasizing systems engineering and the interfaces between elements of the program was key. 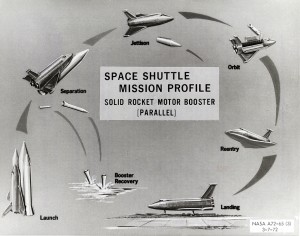 This 1972 chart conceptualizes the use of two parallel Solid Rocket Motor Boosters in conjunction with three main engines to launch the proposed Space Shuttle into orbit.
Photo Credit: NASA

One of the important lessons of a successful program transition is the value of moving people over to the new program and involving them in the design process as early as possible. That way, you get the full benefit of their expertise and ensure their commitment to the new program.

NASA’s challenge today is to make sure the last shuttle flights are carried out safely while we develop the next generation of launch vehicles and spacecraft. The timing appears good to transfer experienced hardware and operations people from the shuttle to Ares 1 and Ares 5 development. If Ares should be delayed more than eighteen months or more, though, NASA will face the problem of not having new work to move experienced people to as the shuttle program winds down. It is important to try to avoid that problem to ensure that the Constellation program will get the benefit of many years of shuttle experience, just as the shuttle program got the benefit of Apollo.

Jim Odom began his career in the launch vehicle business with the Wernher von Braun team as a G.I. developing and launching the army’s Redstone and Jupiter rockets. He transitioned with this team to become NASA’s Marshall Space Flight Center. He retired from NASA in 1989.