Back to Top
Home/ASK the Academy/Volume 4/4.6/This Month in NASA History: Genesis Launches 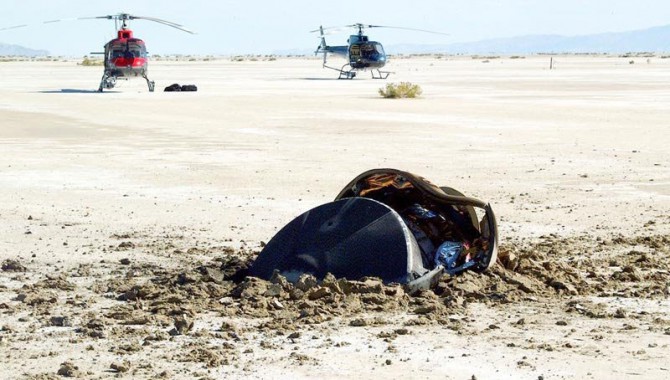 Ten years ago this month, Genesis launched to discover the origin of our solar system. Three years later, it had an unexpectedly rough return in the Utah desert. 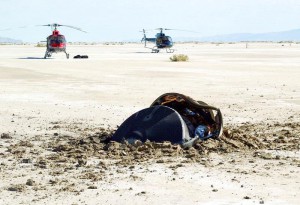 On August 8, 2001, the Genesis spacecraft launched aboard a Delta II rocket from Cape Canaveral on a million-mile journey to its orbit at Lagrangian-1. The fifth Discovery mission, it was to provide a better understanding of the formation of the solar system. Flying just outside the Earth’s magnetosphere, Genesis captured samples of solar wind that would later be returned to Earth and analyzed for their chemical and isotopic composition. The spacecraft was equipped with ion and electron solar-wind monitors and an electrostatic mirror.

Resembling an “unbuckled wristwatch” while on orbit, the Genesis spacecraft closed up on April 1, 2004, and after 28 months headed for home. The entry, descent, and landing profile for the mission involved the capsule entering the atmosphere with a parachute system slowing its fall to the ground—only the parachute never deployed.

The Genesis capsule plummeted into the Utah desert at 193 miles per hour.

While technically not a failed mission because the mission samples were still intact, the return was categorized as a formal mishap. NASA Chief Engineer Michael Ryschkewitsch, leader of the Genesis Mishap Investigation Board, reflected on his experience:

Your first reaction when you see a mishap is “Boy, must be some sloppy incompetent folks that did that.” What you learn in a heartbeat is that there are a lot of very high-quality organizations that at some level, either simply made some little mistake or got lulled into some complacence along the way and it had disastrous consequence. But the more important thing you learn is that you are not as good as you think you are. Working through Genesis, I think every mistake that was made there I had seen someplace in some project that I had worked on. There had been enough other checks and balances and safety nets so that we’d never had a disaster like that. But I had seen every attribute in that. And having read a whole bunch of other mishap reports, you see the same kinds of thing happening again. I think one of the things we probably need to do a better job of is getting more people onto mishap teams and reading mishap reports and seeing what is out there. There is such a tiny fine line between success and failure in this business.

The mishap investigation board concluded that the proximate (or direct) cause of the Genesis mishap was an acceleration-sensitive sensor called a G-switch. Normally, a plunger in the sensor responds to the buildup of gforces as the capsule moves through the atmosphere. The plunger makes electrical contact at the end of the sensor, closes the circuit, and arms a sequencer. When the g forces lessen, the plunger moves away, breaks contact with the end of the sensor, and starts the sequencer.

The board identified six root causes for the mishap:

Despite the mishap, the Genesis mission samples were successfully recovered and have been providing insight into the formation of the solar system.

Learn more about the Genesis spacecraft and mission.