Back to Top
Home/ASK the Academy/Volume 5/5.3/The Space to Collaborate, the Space to Share 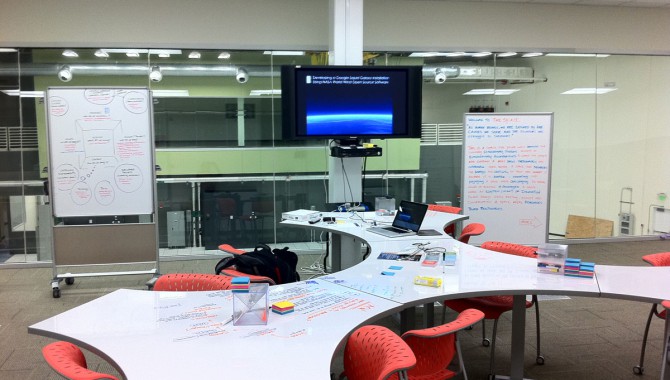 As NASA quickly approaches a workforce transformation, a movement has surfaced to not only rethink how the agency shares what it knows, but where. 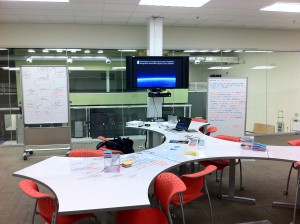 “Knowledge at NASA doesn’t only live inside peoples heads. Its in the relationships between people, the space between people,” said Larry Prusak, Editor-in-Chief of ASK Magazine, in 2006. “The architecture of buildings is a great symbol and signal of cooperation and collaboration. When you go into an office and see one hundred closed doors, no open space, no space for talking, no space for meeting, it [sends] a big signal.”

The importance of face-to-face collaboration, knowledge transfer, and innovation is the reason why pharmaceutical company Novartis began knocking down and rebuilding nearly twenty of its buildings in 2005. Its why Steve Jobs installed bathrooms in the atrium at Pixar, and why Fuji Xerox has rooms called “The Shipyard” and “The Brain.” All these organizations recognized the importance of creating spaces that enable people to collaborate and think creatively.

At NASA, the 2010 Telework Enhancement Act, which provides employees and managers with flexible work arrangements, and recent travel budget cuts are forcing the agency to rethink how people work together, which has added momentum to efforts across the agency to create collaborative work spaces at the centers. These efforts, along with the increasingly collaborative nature of NASA projects and distributed teams, indicate a growing interest in work spaces that are accessible, connected, and flexible.

Since its inception, Langley Research Center’s Navigation Center has grown from 2,500 to 10,000 square feet. It consists of different-sized rooms outfitted with projectors, tables, screens, whiteboards, wireless Internet, and speakers. With trained facilitators available on-site, the space is set up to enable creativity and connectivity. “It’s an open environment. We are known for being neutral territory,” said Karen Freidt, the team lead at the Navigation Center. “My office space provides a variety of hotelling options [i.e., an unassigned work space] for all. Employees can use the small desk, the treadmill desk, or the air-hockey-combination-conference table as they please. If someone is using a certain space, I just find another spot to work.”

The Navigation Center’s origin story starts in 1993, when the future of Langley’s wind tunnels was threatened. Unless the center found a way to increase efficiency and decrease cost, the tunnels would have to be shut down entirely. The Wind Tunnel Enterprise (WTE), a team dedicated to reinventing how Langley managed its wind tunnels, was created. Senior decision makers—influenced by a five-day facilitated workshop that took place in a collaborative environment—decided to establish a collaborative working space called the Navigation Center to enable the WTE to find a creative solution and save the tunnels.

“The Navigation Center is much more than just the space. The employees, especially those who have the expertise in facilitation, creativity and innovation, are the heart and soul of this space.” said Freidt.

“When an organization wants to do a major improvement to its processes, it frequently takes a burning platform issue to make it happen,” said Charlie Dunton, a senior facilitator at Navigation Center. “The Navigation Center here at Langley formed under exactly those circumstances.” If the organization fails to meet the demand in front of it, it will likely crumble. “I think we may be seeing the same thing going on with collaborative spaces at NASA,” said Dunton.

Writing on the Wall

Last August, David Miranda, a simulation engineer and in the IT Directorate and member of the Spaceport Innovators at Kennedy Space Center (KSC), got the go-ahead and a bit of funding from Pat Simpkins, KSC Director of Engineering, to find and outfit a space dedicated to innovation at KSC. “What that meant was whiteboards everywhere. Every surface should be a place to share your ideas, which includes the walls and the tables. In the future, we want to find ways to connect with other rooms through video cameras and shared digital whiteboards,” said Miranda. 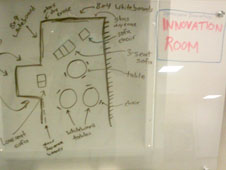 Concurrently, Skip Owens, a systems engineer at KSC, is working with Miranda to develop a space that allows engineers to take the product from Miranda’s room (the idea) and then produce a design. NASA is already home to several integrated design centers, places for parallel problem solving. (The center at the Jet Propulsion Laboratory, also called Team X, was recently featured in a Gizmodo story.) Going to the Moon? Get the flight design, thermal, and power engineers all in the same space to crunch the numbers concurrently. Now, imagine if these engineers were capable of doing this easily and effectively in virtual space. “If you’re working on a particular design problem, you could bring in an expert at Glenn or Goddard for a project at JPL. You wouldn’t have to travel. You could just plug in,” said Owens. “It’d be really nice to know that you could always go into a room and interact with your team that is spread out across all of these centers and have that connectivity wherever you go.”

The ability to effectively share voice, video, and data is critical, Owens and Miranda explained. The standard methods of collaboration are no longer enough for today’s work. “On a telecon, I can’t see what you’re saying. With video, we can see each other faces, but we can’t read each other’s minds,” said Miranda. “That’s where things like shared whiteboards come in. It’s a way for me to show you my mind.”

In 2008, an informal, roving collaborative work session called “Co-Lab” emerged at Langley just as the Navigation Center was gathering steam. An individual would send out an email to the group, inviting everyone to a new location each time. They’d eat lunch together and then whip out laptops and paperwork and pick up with business as usual. “I really found a lot of value in Co-Lab,” said Eileen Nelson, Executive Liaison to Langley’s Chief Strategist and Speakers Bureau Manager at Langley. “It was a great way to meet and network with other people, brainstorm with them, and learn what other people at Langley are doing and how it related to me.” The roving Co-Lab meetings lasted for about a year.

Johnson Space Center took a different approach: a fixed physical space with a roving workforce. Located on the second floor of Building 29, the “sp.ace” is outfitted with mobile tables, chairs, and whiteboards to allow users to reconfigure the room to meet their needs. It is a place where the traditional workforce meets the increasingly transient one through the physical space and virtual space via online collaborative tools. “Get out of your office and co-locate to work with your colleagues”, wrote Christopher Gerty, a member of NASA’s Open Government Team, on the open.nasa blog. “Share ideas and help each other look at problems differently, brainstorm solutions, or maybe even just practice that big presentation in front of an unbiased pair of eyes.”

Open, light, and flat, the sp.ace is an environment where people and ideas can connect, collide, and coalesce. “By discussing issues with folks who don’t have your same perspective, it seems easier to be confident in the right solution to problems faster,” said Gerty. “Connecting also seems less deliberate and more natural. It takes full advantage of face-to-face interaction.”

After visiting the sp.ace, William Eshagh, IT Research and Development at Ames Research Center, returned home to California and started writing a proposal for the Ames analog: the “sp.arc.” The space would be reconfigurable like the JSC sp.ace. “Immoveable furniture is an impediment to the creative process,” said Eshagh. “Not being able to write on walls – we’ve been writing on walls since the Stone Age. It’s natural!”

He also proposed the space as a place to prototype new technologies. Eshagh has been working on an initiative to enable agency-wide collaboration through remote whiteboarding capabilities. This capability would allow users from different locations to draw on the same virtual whiteboard. The sp.arc would be a place for employees to test out technologies like this and determine if they found them useful.

Though Eshagh’s proposal has yet to find a home at Ames, another nearby space with a similar purpose just started to gain momentum. Located at the Ames Research Park, “Connect Lab” acts as a place for anyone to work and learn collaboratively across disciplines and to test out new technologies (e.g., iPads).

“I honestly think there’s something to these spaces. I don’t think this is a fad,” said Eshagh. “Ames is surrounded by companies that understand that it’s important to work in a place that fully allows you to be creative. If we can’t attract new talent by demonstrating how forward-leaning we are in the way we think about how we work with one another and how we get things done, we’re going to find that the bright ones will go somewhere else.”

A major determining factor of the success of collaborative spaces is if they are accessible to everyone. These spaces tend to succeed if they are equipped with the right capability (e.g., wireless Internet capability, electrical outlets, screens, etc.), are easily accessible (e.g., no locked doors, no unnecessary layers of security, and not far removed), and have community buy-in.

“Money,” said Miranda, “isn’t a deal breaker.” For instance, he asked, why buy additional whiteboards if you can use the frosted glass walls in a room? “The whole room can be a canvas for your ideas,” said Miranda. Sometimes all that’s needed is permission to utilize the space and resources that already exist.

Efforts to create collaborative spaces are not confined to Langley, Kennedy, Ames, and Johnson. The next steps involve finding ways for center-based collaborative spaces to work with one another. “We’re paying attention to what each other’s groups are doing,” said Dunton. “As these spaces pop up across the agency, we need think about connectivity.”

The benefits of collaboration include unexpected synergies, diversity of thought, better products, and cross-pollination of ideas. These benefits, while seemingly intangible, are what drive innovation and organizational progress. Creating a space where ideas can thrive is increasingly important in today’s project world.