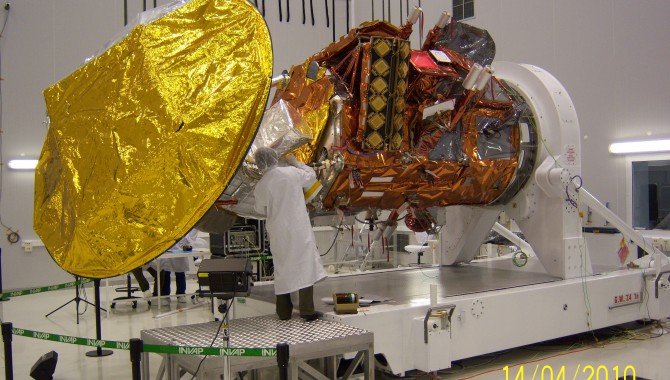 When the Aquarius mission launched from Vandenberg Air Force Base in June 2011, few Americans outside the Earth-science and space communities probably knew that the satellite itself came from Argentina. 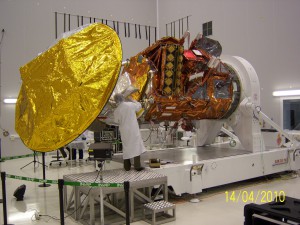 The Aquarius instrument is integrated to the service platform at INVAP (Bariloche) just before its shipment to Brazil for environmental testing.
Photo courtesy of INVAP/Luis Genovese

The Aquarius/SAC-D mission (SAC is the acronym for Satélite de Aplicaciones Científicas—Scientific Applications Satellite) is the fourth in a series of satellites developed by the Comisión Nacional de Actividades Espaciales (CONAE), Argentina’s space agency, in collaboration with NASA. CONAE’s industry partner, INVAP, was responsible for building the spacecraft and conducting all integration and testing activities.

For Luis Genovese, INVAP’s project manager for the Aquarius/SAC-D observatory, this project reflected the maturation of a collaborative relationship with NASA that began in the early 1990s. By the time of the Aquarius proposal in 2002, he had worked with his partners at the Jet Propulsion Laboratory (JPL) for years. “This was the first time we were participating in a project where the mission itself was a NASA mission,” he said, noting that Aquarius was selected by NASA through a competitive process.

Since NASA’s Aquarius instrument would be flying on a CONAE-INVAP spacecraft bus, NASA implemented a rigorous insight program to ensure alignment with the agency’s standards and requirements. “We provided a high level of visibility into the methodology and the processes that we follow in our space missions, and this went very well, as many of the processes were already qualified from the previous SAC projects,” said Genovese, citing electronics manufacturing and software engineering as competencies that already met NASA standards or certification requirements. 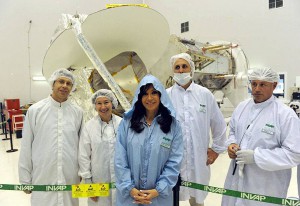 Genovese also had other stakeholders to manage. In addition to the Aquarius instrument, the spacecraft carried seven other instruments—five developed in Argentina, one from France’s Centre National d’Etudes Spatiales, and one from the Italian Space Agency. “Everyone had configuration requirements that required the right implementation, and at the same time we had to ensure full system compatibility,” he said. With such diverse partners, the challenge extended beyond technical compatibility. “Our cultures are different so it was kind of a challenge for many, many people being able to communicate to different NASA centers with different ways of operations.”

As with any spaceflight project, Genovese and his team encountered unanticipated hurdles along the way. The original mission design called for using a nickel-hydrogen battery from a U.S. vendor to power the spacecraft. As the design progressed and requirements changed, the cost of the original battery technology became prohibitive. After assembling a tiger team that included experts from Goddard Space Flight Center, CONAE and NASA approved a decision to switch to a lithium-ion battery, which would offer greater efficiency and performance. The new battery technology had never been subjected to as many cycles as Aquarius demanded, so significant work had to be done once a vendor was selected to ensure the new battery would meet the missions requirements.

Another problem emerged relatively late in the spacecraft integration process. A test of the propulsion subsystem revealed a leakage problem with the thrusters. At this point, a worst-case scenario might have been a delay of a year or more. Fortunately, INVAP’s partners at JPL were able to procure a qualified replacement thruster from a U.S. vendor with minimum trouble. “Working as a team with JPL, CONAE, and the vendor, and having the luck to have all the expertise, we had to be sure that everything was implemented correctly because our technicians had to reconnect the thrusters and test the overall system from mechanical, electrical, and propulsion points of view,” said Genovese. Much of the repair work was performed in Brazil, where the observatory environmental testing took place, adding another level of complexity in terms of project management.

SAC-D also posed an infrastructure challenge to INVAP: at the time the project was awarded, the spacecraft’s dimensions were significantly larger than their existing facilities could accommodate for integration and testing. The company made a strategic decision to invest in a new 60,000-square-foot facility in Bariloche, Argentina, to meet the needs of the project. “When we started to assemble the service platform, it was the first time we used this new assembly and integration facility,” Genovese said. “We were very proud of having the Aquarius instrument being delivered to Bariloche for system-level integration and testing at our own facilities.”

Reflecting on how Aquarius demanded a deeper level of international collaboration than the earlier SAC projects, Genovese emphasized the role of trust and constant communication. We especially took care to provide a high level of visibility of our work to NASA. “We worked really as a team, and we were not hiding anything in any aspect,” he said. “This project took eight years of work here. More than two hundred people were involved, and more than 650,000 engineering hours were devoted to this project, so I would say that trust and communications were the most important considerations.”

EYE ON THE OCEANS

Aquarius will allow scientists to see how freshwater moves between the ocean and the atmosphere as a result of rainfall, evaporation, ice melt, and river runoff, and will supply new insights on ocean circulation and climate. Aquarius’s measurements of sea-surface salinity will provide a new perspective on the ocean and its links to climate, greatly expanding upon extremely limited past measurements. During its first few months in space, the mission will acquire as many measurements of sea-surface salinity as had been collected from ships and buoys during the previous 125 years.