Back to Top
Home/5.7/ASK the Academy/Volume 5/This Month in NASA History: Landsat Turns 40 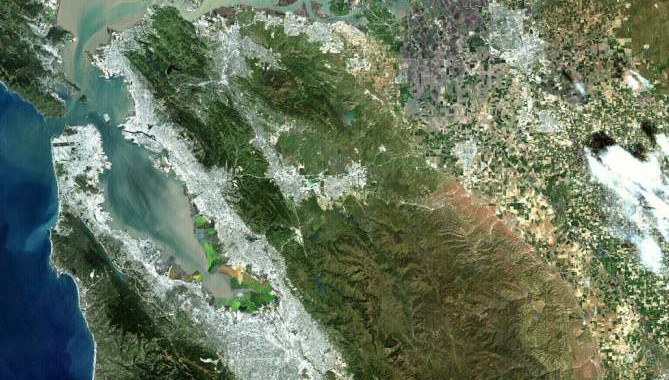 NASA and the U.S. Geological Survey (USGS) celebrated 40 years of Landsat at the Newseum.

On July 23, 1972, Landsat 1 launched into space, carrying with it two instruments: a video camera system called the Return Beam Vidicon (RBV) and the Mutispectral Scanner (MSS), which recorded data at four spectral bands red, green, and two infrared bands. Forty years later, NASA and the USGS are poised to launch the Landsat Data Continuity Mission (LCDM) in early 2013, which will provide continuity to the Landsat dataset.

Castle shared stories of Landsat imagery and the important role it has played in our daily lives, including the 1980 Mount St. Helens eruption, the Kuwaiti oil fires that followed the Gulf War in 1991, the devastation of Hurricane Katrina in 2005, population growth and industrialization in Beijing, China, and the slow but steady retreat of Alaska’s Columbia Glacier since the 1980s. Landsat data has provided scientists and decision-makers with the capability to better manage land resources such as agriculture, population growth, and climate change. “We need tools like Landsat and the many applications it spawned to manage those challenges.”

Abdalati also announced a new initiative called the NASA Earth Exchange (NEX), a collaborative platform where scientists can access and analyze large Earth-observation datasets, including those from Landsat, for scientific discovery and knowledge sharing. “The beauty of Landsat is that it shows us places we’ve been and places wed like to go some day, said Abdalati. “The biggest challenge that we face is that we’re in an environment where we compete with many other stressors on the federal budget.”

While the future of Landsat is rooted in the 2013 launch of LCDM, the program continues striving to meet the needs to the scientific community and the decadal survey. Landsat has become the gold standard for remote sensing from space, said Castle, adding a final quote from Socrates. “Man must rise above the Earth to the top of the atmosphere and beyond for only thus will he fully understand the world in which he lives.”

Learn more about the Landsat Program.

NASA’s Landsat 7 spacecraft now orbits planet Earth. Looking down from an altitude of 700 km, Landsat 7 can map the planet’s surface in visible and infrared bands and resolve features 30 meters across or smaller.