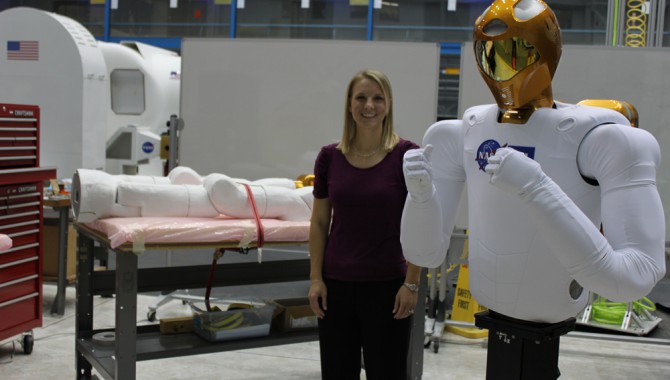 C.J. Kanelakos, mechanical engineer at Johnson Space Center, with the R2 torso and legs on the table in the background. Photo Credit: NASA

Straight out of graduate school, Carolynn “C.J.” Kanelakos had the opportunity to build Robonaut 2’s lower half.

On February 24, 2011, Robonaut 2 (R2), the NASA-General Motors humanoid robot torso, launched to the International Space Station (ISS).  With its state-of-the-art dexterity, unmatched weight-lifting capability, and slick helmet, R2 was designed to perform anything from routine, time-consuming tasks to high-risk work. A step forward in humanoid robotics in space, the robot serves as a teaser to futures imagined by Isaac Asimov. It also begs the question: Where are its legs?

The R2 torso could be adapted to different types of “legs”: a Segway-like roller, a six-wheeled rover called “Centaur” or a bipedal set of legs. Kanelakos started work on a pair of walking legs for R2, but a shift in vision for the program resulted in the need for a different type of legs. R2 currently resides inside the space station—a place where walking is not a prerequisite.

In a microgravity environment, legs serve a different function than they do in a 1g environment. “Humans don’t really use their legs that much in space except to keep themselves from floating away,” explained Kanelakos. “[Astronauts] anchor themselves with their feet while they do stuff with their hands. For our purposes, we wanted to use the legs to be able to climb around.”

Kanelakos and the R2 team considered a number of possibilities for R2’s new ISS-ready legs and observed how humans naturally move about the station. “We couldn’t really have the robot climb efficiently using traditional joints like humans have in our legs,” said Kanelakos. “The legs that we’re designing have some additional degrees of freedom, which means [building in] extra joints. ” The team addressed a number of questions: What will the R2 legs interface with? How will they actually move the R2 torso around? What size do they need to be in order to fit inside the space station? What do they need to look like?

“We wanted to make sure that they were long enough to reach across a hatch and still fit inside the space station because they were [and] are designed for intravehicular activity (IVA),” said Kanelakos. “From there we started taking input from everyone on the team and asking, what are the things that work well in the upper body and how can we improve the actuators (a type of motor used for controlling a mechanism)?”

At this stage of the project, Kanelakos ran into a knowledge gap. “I didn’t know the way things were done and I really didn’t know much about the torso at all because I didn’t work on it,” she said. The Robonaut program had a previous 12 years of history, and she needed to catch up. 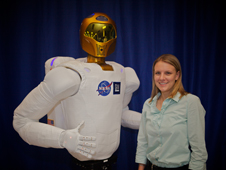 The R2 team skews younger than most others at NASA but is supported by a wealth of expertise and robotics knowledge. If she needs to know something, Kanelakos usually will go straight to a team member who has specific expertise or has been around the program longer.

“When we started on the climbing legs, I thought, this will be a great opportunity to start learning more about the actual design of R2 actuators and why they did things the way they did in the upper body,” said Kanelakos. “I also thought it could be a good way for me to bring a fresh perspective because I don’t know why things were done the way they were. I asked a lot of questions.”

Things just sort of get passed down, she explained. “I’m actually experiencing that right now. We’re trying to design Extra Vehicular Activity (EVA) compatibility into the robot, which means sending it outside the space station. That’s a huge challenge in itself. Coming from zero EVA background, I have no experience with spaceflight hardware. Hardware that is outside [the station] goes into vacuum, it’s experiencing extreme temperatures, and all of these other factors have a huge impact on your design and your hardware. Where do I even start with all of that?”

Kanelakos says she talks to people to find what she doesn’t know. “It pretty much is talking to people,” she said. “I need to find someone who can help me find those other resources.” Learning conventions and then challenging them is part of the process. “What if we did it this way? What would the impact be? What would be an improvement? I’m just trying to learn from the guys who were there before,” she said. “Sometimes you have to dig a little deeper and ask if [a certain way is] still the right way to do it.”

Kanelakos also values what she has learned from her leadership and management. Over its 15-year history, the Robonaut program has seen its ups and downs in funding and support. She has taken care to learn how her management has sustained the program through varied levels of support through partnerships and adaptable workflow.

Additionally, spending time with seasoned practitioners has been critical to gaining knowledge about the project. Rob Ambrose, chief of the Software, Robotics, and Simulation Division and lead of the original Robonaut team, takes the time to discuss the project and offer his insight, she explained.

“Even though I’m not working directly with him right now and he’s not involved quite as much in the day-to-day activities of Robonaut, it’s been great to talk to him just because he has so much experience and so much knowledge in the field of robotics,” said Kanelakos. “It’s cool to learn things from him. Things we didn’t even think about that might have just gotten lost over the years.” 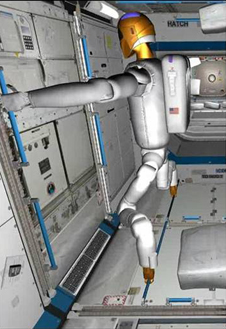 Computer-generated image of R2 working inside of the International Space Station with its climbing legs locked into a track configuration and grasping the hand rails.
Image Credit: NASA/Johnson Space Center

Putting One End Effector in Front of Another

With any project attempting to emulate a human capability, there is always the question of whether or not a desired task has to be accomplished the same way a human performs it. In the case of R2’s “roving” legs, four wheels were more appropriate than a humanoid bipedal system. In the microgravity environment of ISS, the team had considered just using a single leg (a “tail”), but this wouldn’t have provided the desired autonomous mobility. If one leg wasn’t enough, then how many would be?

Two fit the bill. More legs introduce increasing complexity, including the need to design a system to keep track of all of R2’s appendages. At the end of each leg is an end effector, a sort of clamp for gripping onto a handrail or other surface of the ISS. “If you put all four of your fingers together and then you have your thumb on the other side, that’s almost what the gripper is like, except symmetrical,” explained Kanelakos.

Telling the end effectors where to go is a something of a beautiful problem. Humans do it every day when we put one foot in front of the other. We (usually) don’t need to look at the ground. For R2, it has to look at the ground constantly. For R2’s torso, hand movements are driven by a vision system that is still in its development stages. “Integrated cameras in the head and the end effectors will provide vision and software [will] use that to figure out distances and have the robot – long term – be able to…figure out where the next hand rail is, figure out how far it is, and how it needs to move to grab onto that handrail,” said Kanelakos.

The team did consider replicating the hands and using them as part of the legs. However, “We knew that the hands themselves were probably not going to be strong enough and the fine dexterity in the hands was not a requirements for the legs, so that’s when we started [looking at] the end effector,” said Kanelakos. “We needed some extra strength for the robot to be able to hold on tight to the hand rails and climb around the station while leaving the arms free to perform other tasks.”

The next step is to translate these hand movements to leg movements. “We can tell the end effector a point in space where we want it to go and so the rest of the joint can figure out how to get there. We know how to do that for the arms right now, so it’s basically just transferring that knowledge into the joints for the legs.”

“It’s not an easy task,” said Kanelakos about autonomous robots. “If it was, we would have them all around us already.” 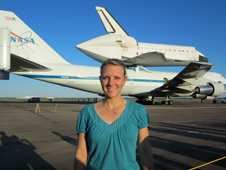 C.J. Kanelakos, mechanical engineer at Johnson Space Center, with the Space Shuttle Endeavour in the background in 2012.
Image courtesy of C.J. Kanelakos.

R2 is scheduled to get its lower half sometime next year. In the two years Kanelakos has been on the project, she has learned volumes. Designs and documentation are stored within CAD models and shared drives. Time spent with seasoned practitioners like Ambrose offers valuable opportunities to gain insight into a career’s worth of experience. Open laboratory spaces also enable free and spontaneous opportunities to collaborate.

Kanelakos acknowledges the challenge of sharing what she knows. In an electronic system, “you have to know where to go to find what you don’t know,” she said. “If you want to find some specific documentation on a shared drive, you [usually] need to ask the person who put it there. You can search, but keywords just don’t always come up with what you need.”

“I don’t really know what the answer is for engineering documentation. I think that’s a constant challenge,” she said. “Engineers just want to keep doing what they’re doing. They don’t want to write a book on why they did what they did, but there is a lot to be said about having good documentation and being able to learn from it.”

There is a balance that needs to be achieved between capturing enough detail and achieving efficiency, she explained. “Where do you draw the line?”

C.J. Kanelakos, mechanical engineer at Johnson Space Center, with the R2 torso and legs on the table in the background.