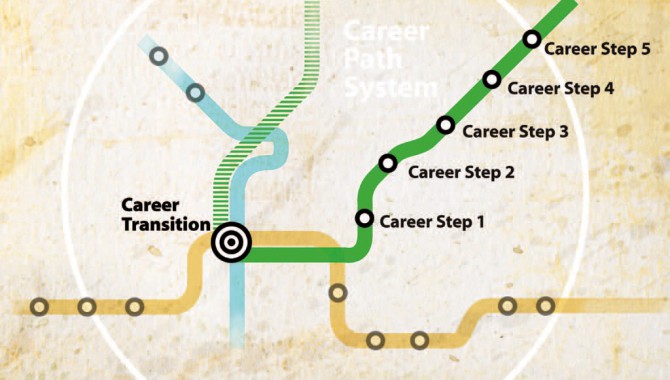 The ability to plan one’s career path can be a strong force for morale and fulfillment in the workplace. The need for a clear career path has been recognized for many years at Goddard Space Flight Center. In fact, Goddard’s Applied Engineering and Technology Directorate (AETD) began to plan a career-path tool approximately four years ago.

The idea was simple: build a career-path “map” that would be easy for employees to use. The design would be similar to the map used by the Washington, D.C., Metro subway system, since most people are familiar with metro or bus-mapping pamphlets. The various metro or bus routes would be career “ladders” that would give employees a way to lay out their future career development.

Due to other urgent demands, the AETD career-path project was temporarily set aside; but Goddard leader Maria So never abandoned the vision of an easy-to-use career-path tool. Fast-forward several years. So was promoted to the position of deputy director of the Safety and Mission Assurance Directorate (SMA). With an eye toward building organizational strength for the SMA Directorate and considering morale and retention, as well as recruitment of engineers, scientists, and administrative support positions, she decided to revisit the idea of the career-path “Metro Map.”

Building a new system is nothing new to an engineer like So, but her vision for success included a desire for strong collaboration and joint leadership with another important stakeholder, Verron “Ron” Brade, the director of Goddard’s Office of Human Capital Management (OHCM). After obtaining support from her manager, Judy Bruner, director of Goddard’s SMA Directorate, So asked Brade to collaborate in building a career path for the SMA Directorate. The project aligned with his strategy of transforming OHCM into a collaborative, valuable partner for its customers, so he readily agreed. They assembled a team that included Nichole Pinkney, chief of OHCM’s Talent Cultivation Office; Nancy Lindsey, mission systems senior reliability manager; and David Wilhelm, senior human resources consultant.

From the outset, So’s vision for the career-path tool included defined paths or “ladders” for each discipline. In addition, the application needed to be web accessible, allowing employees to view career-path information and see the different potential paths for their positions. Like other organizations at Goddard, the SMA Directorate is composed of several disciplines, and employees often did not know what training or experience they would need to be promoted, to move laterally into a new position, or to transition to another discipline.

Pinkney immediately saw the possibility of implementing a career-path system not only for SMA, but for all Goddard organizations. She realized that a centerwide career-path system could provide an overview of opportunities for growth and development, including discipline transition possibilities for center employees. It could also assist in identifying competencies and skills that are natural “feeders” to building the leadership team.

With this vision in mind, Pinkney agreed to a modest budget to hire a small business contractor to quickly build a prototype system for SMA. She realized that capturing the right data was vital to the usefulness of this system. She made sure that Wilhelm, as senior human resources consultant, would have sufficient involvement in this groundbreaking project, since he had tremendous insight into human-capital development. He drafted a set of insightful questions to ask SMA managers so the appropriate training data for all disciplines would be captured. He conducted all the interviews along with the SMA implementation team and guided the data-capture process. Once the initial data was validated by SMA management, Wilhelm conducted a review and validation with the other OHCM disciplines.

Understanding the goals defined by So and Pinkney, Lindsey took on the task of implementation management. With many years of experience in program management and requirement development, and a software development background, she had the knowledge needed to manage the project and to understand the expertise needed to ensure success. She built a team with the necessary diverse skills, including Wilhelm; B-Line Express, the small business contractor that has provided experienced design and Internet application development since 1995; and SMA managers, who provided raw career data and validated its incorporation in the SMA career-path web site.

Project sponsors provided guidance and offered suggestions during the design phase of the project and during debriefing meetings while giving the team the freedom to meet the challenge of developing a creative career-path tool. When confronted with a challenge, the development team frequently charted possible solutions in writing so they could collectively consider each other’s ideas.

One such challenge was to show the user the option to transition between the ten unique SMA technical positions at seven grade levels without creating a visually confusing and intimidating “spaghetti” of transition lines. The team used the human-capital interview data-gathering process and storyboarding to resolve this issue.

Interviews showed and human-capital management verified that promotional transitions from level to level were consistent within disciplines and provided in the standard career paths within each discipline. So only information about transitions between disciplines was needed. The team then storyboarded and whiteboarded several concepts, walking through each user click. A textual list within the discipline description window and a graphical representation of transition options by grade/discipline proved to be the solution that supported the goal of transmitting consistent data to the user without creating a confusing image of many paths.

The same process was used to solve the similar challenge of showing the user how to transition from technical to supervisory responsibilities. Having a team that represented both the engineering side and the human-capital side of the business added efficiency and depth to the process of making design decisions.

B-Line Express was given the challenge of building an application that embodied the goals and objectives of the original vision. The company collaborated closely and frequently with Lindsey and Wilhelm to develop the web-based design concepts and ideas for how best to provide career-path guidance and strategic planning for the workforce. The team used storyboarding extensively to turn ideas discussed in their many team meetings into web-based application design. This iterative process was a fast and effective way to develop the application and keep it faithful to the vision that So and the team had formulated.

The B-Line development team, led by project manager Nancy Rackley, included a graphic designer, a web-application developer, and a database engineer—all essential skills. Because of B-Line’s experience with comparable applications, the team was able to incorporate a variety of cutting-edge web technologies that ensured a robust user interface, and provided these capabilities quickly and at low cost. The B-Line team also took advantage of numerous collaboration tools to implement the application while maximizing autonomy for innovation, which was essential for the geographically distributed team. This helped greatly with software configuration management during development and with communication among team members.

The result of the collaborative effort is a fully functional career-path application that was designed, developed, and populated with data from four different people with varied skills and backgrounds in only six months. The benefits for Goddard employees that resulted from this collaboration include career planning, training and development planning, and a positive effect on morale. The response from Goddard employees who have accessed the tool has been extremely positive and mirrors the expectations of the development team.

“The career path is so easy to use and so helpful,” noted an SMA employee.

“For the first time I can actually see in front of me how the SMA Directorate is structured by position, and more importantly, by the ‘paths,’” noted another employee.

One employee from OHCM said, “I can see how the career path will help me build my IDP [individual development plan] and prepare me for my performance and development discussions with my supervisor.”

According to Diversity News and Views, a recent survey indicated that roughly 54 percent of workers say knowing their career path is very important to their overall job satisfaction, nearly as important as compensation. The career path benefits Goddard management by providing a tool for succession planning (leadership development), assisting supervisors with employee career-development discussions, providing a positive effect on retention and recruitment, enhancing cross-organizational integration, and strengthening critical links between various center functions.

The career-path project is one in which all parties chose to cooperate to accomplish a shared outcome. So, Pinkney, Lindsey, and Wilhelm are all collaborative leaders in this project. Each of them accepted ad hoc responsibility for building an innovative career-path system that was developed in a cost-effective manner. Together they accomplished the shared purpose of providing career-building data to employees that will help them more easily take charge of their career. Along the way, the four of them established a process and a positive environment that supports the collaborative relationship between the SMA and OHCM organizations at Goddard.

Previous Article by Maria So

David Wilhelm has spent more than twenty years in training and develo[pment, performing the full spectrum of instructional systems design activities for all levels of employment. He is currently a senior human resources development specialist in the Office of Human Capital Management (OHCM) at Goddard Space Flight Center.

Maria So is the deputy director for the Safety and Quality Assurance Directorate at Goddard Space Flight Center. Previously, she was with the Mission Engineering and Systems Analysis Division, first as the senior technologist, then associate branch head of the Earth Science Systems Engineering Branch, branch head of the Mission Systems Engineering Branch, and associate division chief. She is a member of the AIAA Space Systems Technical Committee, INCOSE, and IEEE.

More articles by Maria So

Nancy Lindsey has spent more than twenty-seven years in aviation and aerospace engineering performing a variety of engineering tasks across the gamut of space-vehicle life cycles and program types. She is currently a senior systems reliability manager at Goddard.

Nichole Pinkney has been in training development for more than fifteen years. She is currently chief of the Talent Cultivation Office in OHCM at Goddard, where she manages a team of expert human resource (HR) development practitioners in the field of career development and learning. She has worked on many HR development initiatives.