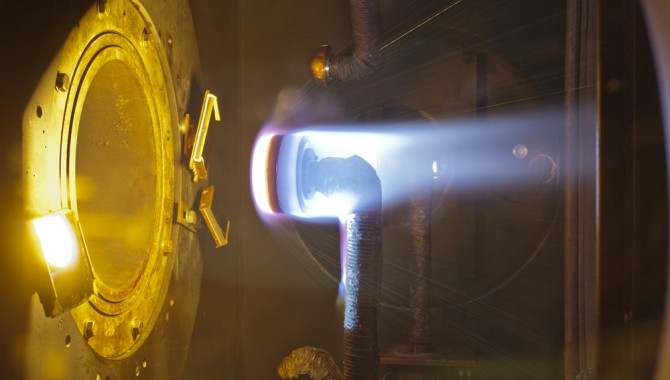 When I took the International Project Management (IPM) course at Kennedy Space Center in the winter of 2012, I had already had some experience working with NASA’s international partners. In fact it was that work, which introduced me to some of the cultural and organizational complexity of working internationally, that convinced me to sign up for the course and learn more. 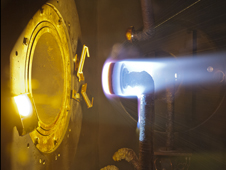 NASA’s current arc-jet test capabilities have worked well—like for this testing of the Mars Science Laboratory entry, descent, and landing instrument—but will not meet the most demanding requirements of future missions. This is why NASA has partnered with CIRA to use the Italian agency’s Scirocco facility, the newest, largest, and most advanced arc-jet facility in the world.
Photo Credit: NASA Ames Research Center

I am a research scientist and project manager in the Aerothermodynamics Branch, Entry Systems and Technology Division, at Ames Research Center. From late summer 2009 through 2011, I was project manager for the Hayabusa Reentry Airborne Observation project, an Ames-led international effort to observe and record the atmospheric reentry of the Hayabusa sample-return capsule over Australia on June 13, 2010.

Hayabusa was an asteroid-exploration mission conducted by JAXA (Japan Aerospace Exploration Agency). Its return was a rare opportunity to collect data from the reentry of an atmospheric entry capsule. NASA’s DC-8 airborne laboratory was equipped with optical instruments that tracked the luminous reentering capsule. The data are being used to validate simulation tools applied to the design of NASA’s future atmospheric entry vehicles. The project had participants from four NASA centers, JAXA, the SETI Institute, and research institutions and universities in the United States, Europe, Japan, and Australia. I assisted NASA’s Office of International and Interagency Relations in negotiations with our international partners to secure the agreements that enabled a U.S.-led team of researchers from seven countries to fly a NASA jet in Australian civil air space to observe the reentry of a Japanese spacecraft.

I found that technical discussions with our Japanese partners were easier than the managerial and administrative ones. We all spoke the same technical language, but our different cultures led to some different ways of working. The clearest example came from the Japanese norm of developing group consensus before a decision is made. That made it harder than I was used to to get a quick response to questions and to understand exactly who exercised executive authority for the Japanese team. It meant that things happened a bit more slowly than I was used to and additional correspondence and face-to-face meetings were needed to arrive at a decision. Technical knowledge is important in these partnerships, but it was clear that diplomatic skills are, too.

Insights from the IPM Course

The five-day IPM course confirmed and helped explain my experience on the Hayabusa project and showed me how others dealt with those and similar issues. There were useful descriptions of how different cultures work, videos of actors assuming the negotiating styles typical of various nationalities, and roleplaying exercises for the class, which included participants from many of NASA’s international partners.

For me, the course confirmed the importance of soft skills in international project work. I learned, for instance, that in working with partners with strong social and familial bonds, it was essential to spend time developing personal relationships before getting down to business-an important lesson for Americans who tend to want to jump in and get to work quickly. The course showed us examples of how the ways of conducting business in another country may seem counterintuitive and even counterproductive or ineffectual to an American. But that’s not for us to decide. Those in other countries may draw the same conclusions about how the Americans work. The primary objective of the course was to prepare us to read the unspoken and unwritten language of cultural norms of other countries. Once the motivating forces of international partners are understood, potential frustrations can be avoided and replaced with strategies for success. 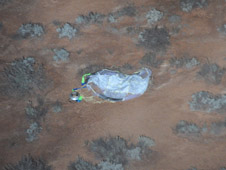 Putting the Lessons to Work

My first opportunity to put some of what I learned to work came in July 2012, when I engaged in discussions with the Italian Aerospace Research Centre (CIRA, the Centro Italiano Ricerche Aerospaziali) to secure a contract for NASA’s use of their arc-jet facility, Scirocco. Arc jets are high-temperature hypersonic wind tunnels used to test heat-shield materials at conditions that approximate the intense heat of atmospheric entry. NASA’s current arc-jet test capabilities will not meet the most demanding requirements of future missions (for example, robotic sample and crewed vehicle return from Mars). The Scirocco facility, patterned after NASA’s own arc jets, is the newest, largest, and most advanced of its type in the world.

The purpose of the test series is for NASA to collect performance characterization data at the extremes of Scirocco’s operating envelope. The data, along with insight into Scirocco’s supporting subsystems, will inform NASA’s efforts to expand its capabilities to meet future requirements. My responsibility was to continue previous high-level discussions between Ames and CIRA regarding the collaboration. The result was a procurement contract awarded to CIRA for testing services with negotiated milestones and deliverables. I got the job partly because I raised my hand—I was enthusiastic about doing more international work—but also, I think, because of my Hayabusa experience and my participation in the IPM course.

The negotiations did not present any significant difficulties: NASA was interested in using the Italian facility; CIRA was interested in finding customers for it. But there was still a lot of work to do to fine-tune the details of a procurement contract: negotiating the scope and schedule of the tests, accommodating on-site NASA observers, sharing relevant facility design documentation, and—most importantly—reaching agreement that CIRA would operate their facility at its design limits.

Developing personal connections before getting down to serious negotiation work proved as important as the IPM course suggested it would be. While the framework of the NASACIRA collaboration was established prior to my arrival, I needed to introduce myself and our procurement specialist to the CIRA representatives, and they to us. 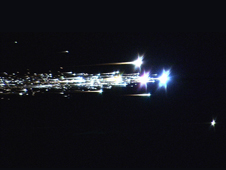 All our discussions leading up to contract award were conducted through teleconferences (with a nine-hour time difference between us). We had not met face to face previously, and the initial correspondence with my counterpart at CIRA was conducted through e-mail. Our Italian colleagues all speak English—a skill more common than one might think—which brings peace of mind to those, like myself, who know no Italian. I opened our first meeting with short summaries of who we were on the NASA team, our roles and responsibilities, and how important this collaboration is to Ames and the agency. My counterpart on the CIRA team did likewise, and we spent a few minutes sharing some personal experiences on the easy, shared subject of travel. After that, I described NASA’s expectations for the contract discussions and the schedule we needed to keep in order to award before the end of the fiscal year—an immovable deadline.

We met frequently via telecon to develop and refine the test plan and statement of work. Concurrently, the Ames procurement specialist worked with the CIRA business manager to assemble all necessary documentation for NASA to contract with CIRA. Our meetings were suspended for the entire month of August to accommodate the traditional European summer holiday. But negotiations went smoothly, and we were able to award on September 26, 2012—just under the wire.

Conducting business solely through telecons with an international team I had never met presented some peculiar challenges. The cues one acquires visually in conversation were absent, and the accented English of our colleagues was at times hard to parse. The lack of nonverbal feedback on occasion caused confusion. But patience and polite queries to repeat questions or answers often resolved misunderstandings. Though it is a common practice for just about every nontrivial collaborative effort, end-of-meeting summaries and reviews of action items were particularly effective tools in these circumstances to assure both parties that we were in agreement regarding expectations.

I believe that all of us charged with responsibility for collaboration have innate common sense and a desire to act reasonably and rationally. How these characteristics are expressed reflects the culture of both individuals and groups. Establishing a very modest personal connection—even over the phone—can draw groups together with a shared enthusiasm to succeed. That worked for us in the contract negotiations with CIRA. The only thing we lacked in the end was a firm handshake to celebrate our achievement.