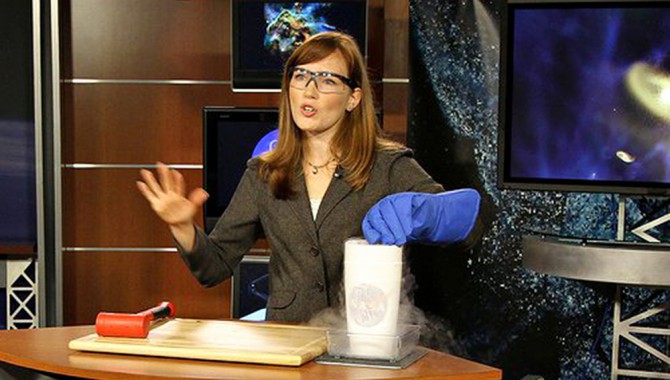 On a small farm in the Middle of Nowhere, Arkansas, the sky was beautiful at night. Looking up at all those stars is how I became interested in astronomy as a child. Later on, Hubble began to release its beautiful images, which made me start asking those big science questions, such as, “How are those stars formed? How did we get here? What all is out there?” Years later, I’m able to study some of these intriguing questions thanks to my work at NASA. 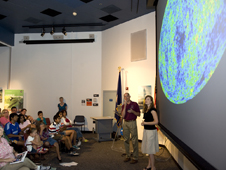 I first got hands-on experience with Hubble during my graduate studies several years ago, when I used data from its ultra-deep field as part of my dissertation work at Arizona State University. Later, I was able to work with Hubble’s wide-field camera 3, which was installed during the last servicing mission in 2009. With that instrument and several others, we gave Hubble new eyes, extending its capability into the near infrared and also the ultraviolet. This allowed us to look at the universe in greater detail and learn more about the universe around us.

Although Hubble’s new instruments extend its capability into the near infrared, in order to push the boundaries and answer the biggest astronomy questions of our day, we need a much larger telescope that also extends into the mid-infrared. Not only does this help us peer through dust, as in the case of newborn stars inside their dusty cocoons, but it also gives us a better view of distant galaxies.

For example, when we look at ultra-deep-field images from Hubble, we find the most distant galaxies in those images are tiny red dots. The light we receive from these distant galaxies has been shifted to longer wavelengths by the expansion of the universe the more distant, the redder their light. In order to see them, we need to see light that is redder, and that’s exactly what infrared light is. That’s one of the big reasons the James Webb Space Telescope (JWST) was designed to be an infrared telescope: it will detect the very first galaxies to be born in the early universe. 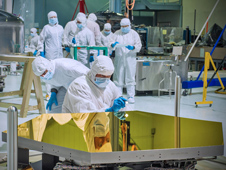 Technicians and scientists check out one of the Webb telescope’s flight mirrors in the clean room at Goddard Space Flight Center. Wavefront-sensing technology was used to measure the shape of each mirror and has spun off into ophthalmology, where it has been used to more perfectly measure the topography of the human eye.
Photo Credit: NASA/Chris Gunn

In addition to improving our vision of these distant galaxies and learning more about how stars form, JWST will also reveal more about how galaxies assemble over time and expand our study of exoplanets—planets orbiting other stars outside our solar system. With this, JWST will study every phase of our universe: from the very first galaxies to form more than 13 billion years ago to the very recent formation of planets that could be capable of supporting life. JWST will observe the universe near its distant edge, and also in our own “backyard” as it helps us learn more about objects within our own solar system.

Succeeding in building this new telescope is only part of our mission of any NASA mission. Another important component of what we do is outreach, telling people what we’re doing and why.

Since what we do at NASA involves complex engineering of one-of-a-kind missions, explaining the intricacies of what we do in a way that’s easy to understand is important not only to maintain support for the mission, but also to engage people in what we’re doing.

To engage an audience, first they have to be interested in what you have to say. One of the great things about astronomy is it’s something the public is interested in and captivated by. The sky is beautiful; the images we get back from Hubble are inspiring and appeal to the public. Astronomy is a good starting point for getting the public interested in science and technology in general. And once you have that entry point, it’s easier to expand upon the engineering required to build these big missions and do the great things NASA does.

Finding time and budget to communicate frequently can be a challenge, but its so important and rewarding. The Science Mission Directorate requires a minimum of 1 percent of all mission funding go to education and public outreach.

Kids and adults alike are drawn in by the captivating images from Hubble, Spitzer, and all the other space telescopes, as well as the cutting-edge technology that goes into building them. Additionally, discussing spin-offs of our technology that apply to their everyday lives helps keep them engaged.

One of the really cool examples of technology spin-off with JWST involves the way we ensure the mirrors are perfect. We used a technology called wavefront sensing to measure the shape of each mirror, and this technology has spun off into the medical field of ophthalmology. Ophthalmologists have used it to more perfectly measure the topography of the human eye. 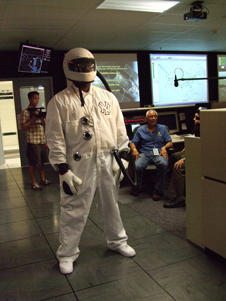 Behind-the-scenes photo from the filming of the “Hubble Gotchu!” segment from Late Night with Jimmy Fallon.
Photo Credit: NASA/Maggie Masetti

Another spin-off example involves JWST’s cryogenic application-specific integrated circuits (ASICs). ASICs are very small and can contain an entire circuit board’s worth of electronics. These circuits were installed on Hubble as part of its advanced camera for surveys, and JWST’s investments enabled these circuits to be programmable, which was important when the camera needed to be repaired. This became a case of “future heritage,” where a program in development invents a technology for a program well into operations.

And those are just two examples of spin-offs that come from the big, bold research-and-development efforts that go into building our huge missions. There are thousands more.

These are ways to structure successful outreach communication, but I think the most important thing is to be enthusiastic about what we’re sharing with the public. Excitement is contagious, and I truly love my job. Ever since I looked up at those Arkansas skies I wanted to be involved with studying the universe, and I find sharing my personal story is a great way to convey my enthusiasm for what we do. It’s also a great way to engage students, showing them one path into space exploration. It’s important for the future of our country to get kids interested and educated in science, technology, engineering, and math—and on the path to making new discoveries in the future.

One question I often get about JWST specifically is why it looks the way it does. Indeed, it is an odd-looking telescope. One generally thinks of tubes and circular mirrors when they envision a telescope, Hubble is of this design, of course. But the answer to that question is we are building it to function optimally for what it’s designed to do: observe in the infrared. Because of this, its mirrors and instruments have to be shielded from the sun (hence the tennis-court-sized sun-shield). People are always fascinated by the design of this observatory.

Finding time and budget to communicate frequently can be a challenge, but it’s so important and rewarding. The Science Mission Directorate requires a minimum of 1 percent of all mission funding go to education and public outreach. It’s a good structure because it allows us to do the great things that get the mission science out not only to students and teachers but also the general public. Creating stunning visuals is one aspect of that. We have a team here at Goddard Space Flight Center who put together stunning visuals, videos, and imagery to go along with the story of the science, which really helps draw in the audience and communicate the science on a deeper level. 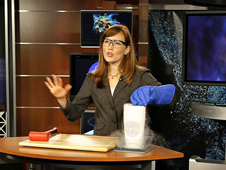 NASA Astrophysicist Amber Straughn demonstrates the cold environment where the Webb telescope will be by dipping flexible rubber surgical tubing into liquid nitrogen in a demonstration video.
Photo Credit: NASA

Social media has become another of the primary means by which we communicate news, and we have a great team here at Goddard that ensures we are on the cutting edge of new media and new communication.

I’m so glad that part of my official mission duties include communication and outreach. I’ve been fortunate to be involved in some cool, quirky things. We filmed with a crew from Late Night with Jimmy Fallon a couple years ago for their “Hubble Gotchu!” segment. They were here all day, and we got to do a funny rap video about NASA that aired on the show. That got a lot of attention and response, and it was a fun and positive experience overall.

These are only a few examples of how to engage others in what we do at NASA. It’s important to do because our missions wouldn’t exist without support and interest from the community. And it helps engage the next generation so they can continue exploring wherever we leave off. Who knows what JWST will teach us along the way, and where we’ll go as a result of what we learn? The only thing we can be sure of is we will need future explorers to take us there. But making sure they’re involved to ask the next big questions of tomorrow takes communication today.

Amber Straughn is a research astrophysicist in the Observational Cosmology Laboratory at Goddard Space Flight Center and serves as the deputy project scientist for James Webb Space Telescope education and public outreach.